Democratic Debate: 5 most important moments for Black voters to consider

Your recap, cheat sheet to the November gathering of Democratic candidates. 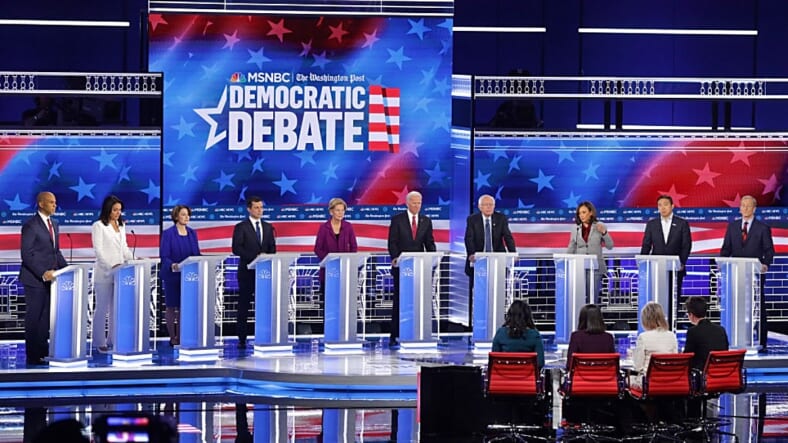 Last night was the fifth Democratic primary debate held at the new Tyler Perry Studios in Atlanta. Former frontrunners Senators Bernie Sanders and Elizabeth Warren attempted to retain their progressive supporters while Mayor Pete Buttigieg made his debut as the current frontrunner in the Iowa polls.

Two millionaires tried to make their case to the American public, but the shadow of former New York City Mayor Mike Bloomberg loomed large each time they opened their mouths. And this was the first time in American history that the majority of people on the stage were women (that is when you include the four female moderators from MSNBC.)

READ MORE: The next presidential debate to be held at Tyler Perry Studios in Atlanta

Some viewers may have felt the debate lacked the “pizzazz” to keep most Americans engaged and enthralled, but the discussion of climate change, moving beyond this current administration, and white supremacy are still really necessary conversations to have. It’s important to know the degrees of grey between each candidate on policy, temperament, and approach to the office. And finally, candidates are getting comfortable acknowledging that the road to the White House for any Democrat is paved through the communities of Black women — shout out to Julian Castro, who was missing last night, for starting that conversation.

And, on that note, here are five takeaways from last night’s debate.

Where was Julian Castro? 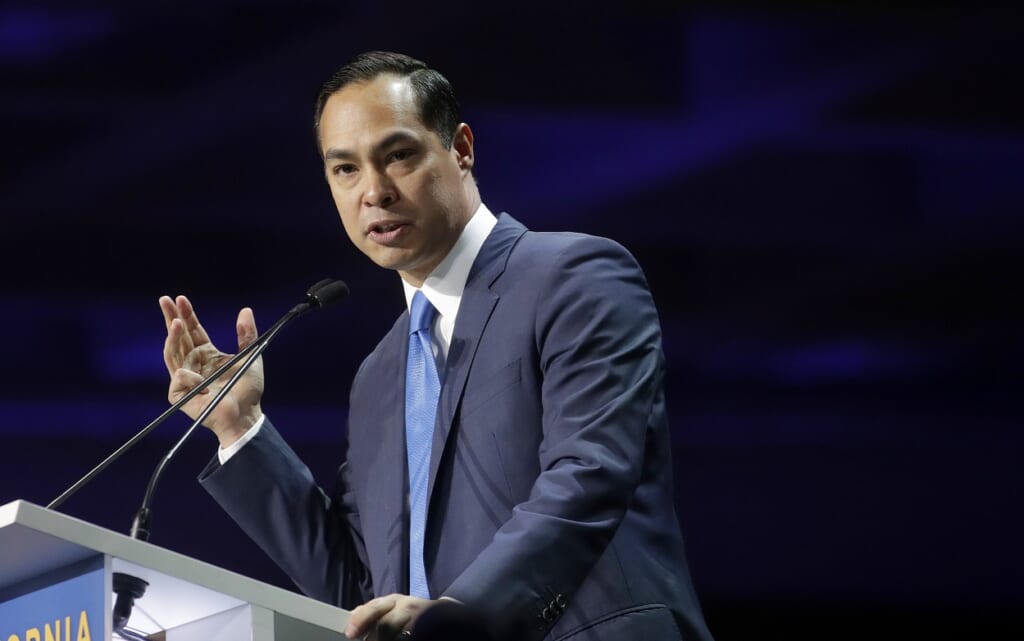 Perhaps the most glaring omission from last night’s debate wasn’t the presence of 10 senators, representatives, mayors, and millionaires, but the absence of former HUD Secretary and San Antonio Mayor Julian Castro.

His presence in the previous debates was a necessary presence. In most instances, it was Castro who invoked the names of slain Black men, women, and children. It was he who addressed the need for policies to address inequity in Black communities, and it was definitely Castro who made sure his fellow challengers accounted for past practices and anti-Black statements and policies. It is my sincere hope that Castro is able to appear high enough in the polls and successfully raise the money necessary to be included in the next debate.

As the only Latinx candidate and the only candidate who has proactively addressed anti-Black racism, it is imperative his voice be included.

Is it just me or do you love the way it seems like Senators Cory Booker and Kamala Harris seem to compliment each other on the debate stage? It is slightly more complicated for each candidate to overtly discuss issues that directly affect Black citizens as well as address the blatant racism and inequality in which millions of Blacks continue to live. Therefore, the strategy of the two appears to be to “dose and reinforce” where one candidate will state a concrete fact about Black women, Black mortality, or the Black condition, and the other Senator will follow up minutes later with a reinforcement of that very point. It may not gain either candidate a first-place finish, but having two Black Senators on stage is meaningful and necessary.

Then there’s former Massachusetts Governor Deval Patrick (aka Black Romney.) Only time will tell if he ends up doing the same when he appears on the debate stage, but judging by the empty seats for his talk last night at Morehouse, I’m not too certain about the future candidacy for Governor Patrick.

Governor @DevalPatrick was supposed to have an event at Morehouse College tonight. An organizer with the college who planned the event told CNN that Patrick cancelled the event when he arrived and learned that he would not have an audience. (Note, two people came, not pictured) pic.twitter.com/CzNjWYcWKJ

Why are you still doing so well Joe Biden? 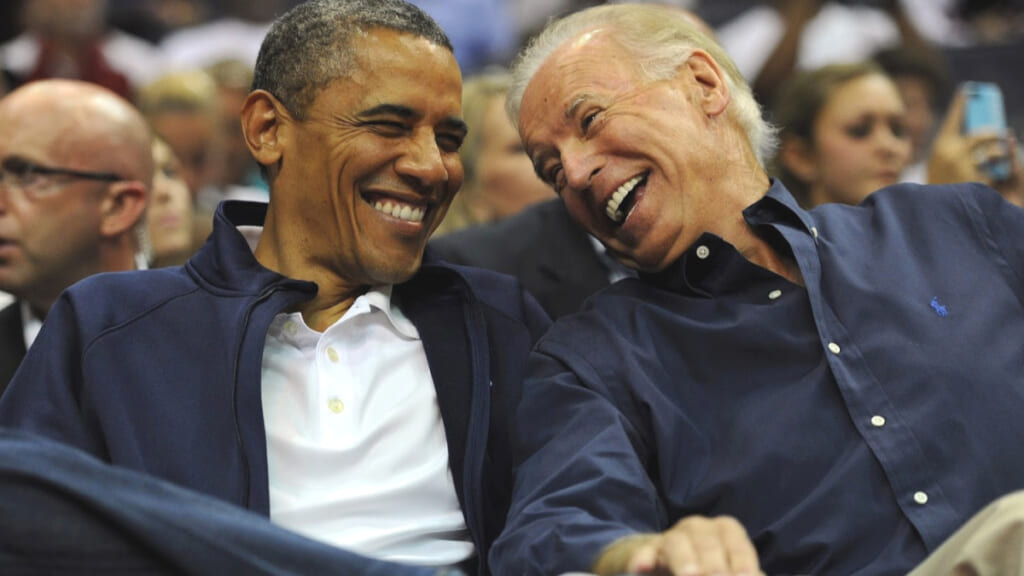 U.S. President Barack Obama and Vice President Joe Biden share a laugh as the US Senior Men’s National Team and Brazil play during a pre-Olympic exhibition basketball game at the Verizon Center on July 16, 2012 in Washington, DC. (Photo by Patrick Smith/Getty Images)

I am so sure I am not the only viewer of the debate who consistently scratches my head in confusion and disbelief every time former Vice President Joe Biden attempted to answer a question. His nickname is now “Captain Rambles” because of the way he answers (or refuses to answer) a direct question. How does a question pertaining to domestic terrorism devolve into a diatribe about domestic violence where the former VP insists we need to “punch it out?”

Joe Biden has served this nation valiantly, but when it comes to the presidency, it is beyond apparent that he should be (and most likely will be) a bridesmaid and not the bride. Sorry, Uncle Joe, you missed your moment somewhere along the road. With each passing debate, you further erode your legacy and goodwill, but more importantly, you raise serious concerns about your competency.

Why was Tom Steyer on stage?

Luckily for most voters, billionaire and climate control advocate, Tom Steyer was out of their television frame for most of the debate. There were stretches of time where he said absolutely nothing and contributed even less. His presence was a reminder of the overt capitalist nation in which we live, where a wealthy man can essentially purchase his way onto a presidential stage.

READ MORE: Senator Cory Booker on his choice for VP: ‘I’ll be looking to women first’

Steyer also serves as the proxy for what is likely to come, the emergence of former New York City Mayor Michael Bloomberg. Unfortunately, the behavior of the current occupant of the White House has inspired millionaires to see themselves as worthy occupants of public office by the mere fact that they have money in the bank (looking at you too, Andrew Yang.)

How is it that Rep. Tulsi Gabbard, a known Bashar Assad apologist, has made it yet again to the debate stage? Indeed, she received a bit of fire from Mayor Buttigieg and Senators Harris and Klobuchar, but her mere presence on the debate should concern many Americans.

Far too many of her talking points sounded like a GOP Fox News summary. Most people believe and accept the wide diversity within the Democratic party, however, Gabbard is the third rail on that debate stage and with each passing appearance, she muddies the already crowded waters. It is time for candidates to systematically address and dismantle her policy positions which are dangerous to the Democratic party and democracy as a whole.

Christina M. Greer is an Associate professor at Fordham University-Lincoln Center in New York City. She is the author of Black Ethnics: Race, Immigration, and the Pursuit of the American Dream, and the co-host of the FAQ-NYC podcast.