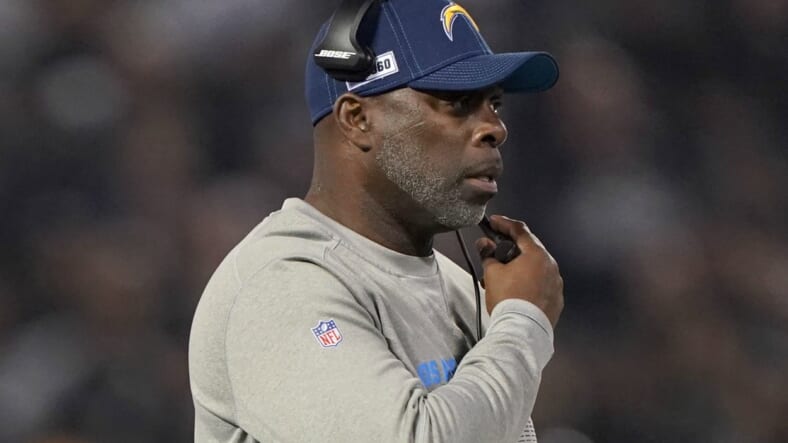 Head coach Anthony Lynn of the Los Angeles Chargers looks on from the sidelines against the Oakland Raiders during the first quarter at RingCentral Coliseum on November 07, 2019 in Oakland. (Photo by Thearon W. Henderson/Getty Images)

While most NFL players and staff use the offseason to rest, Los Angeles Chargers head coach Anthony Lynn got right to work giving back, but he did it halfway around the world.

Lynn and his wife, Stacey Bell, an anchor for NBC New York, traveled to Tanzania to open a school last summer in Lanjani, a rural Maasai village in the East African nation. In an ESPN video of Lynn visiting the school, posted Sunday, Lynn said once he learned of the need, he knew he had to get involved.

“I just want to say you people are positive, you’re very strong and I have no doubt someone’s going to go through this school and not only impact Tanzania, but someone is going to impact this world,” Lynn said in the video.

Lynn said he has been in the NFL for 27 years, first as a player and now as a coach, and there have been many people who invested in him and not just as it relates to football. “That’s why I always tried to pay it forward,” he said in the YouTube video about the school.

“These kids were getting pushed into the workforce as early as possible, growing up without education at all,” Lynn told Sports Illustrated over the summer. “It was sad, because where do your hopes and dreams come from if you don’t have that? How do you know if you like science until you take a science class? When I learned about the situation, I felt like I had to get involved.”

The school fills a need with the Massai’s rural children. Kindergarten through third grade classes started over the summer and included roughly 300 boys and girls. Three years ago, Lynn said he was with a friend, Ravi Reddy, and they were barbecuing and having a good time when Ravi told him about his desire to build a school in Tanzania. Ravi asked for Anthony’s help and the two raised $350,000 to build the school.

READ MORE: In Tanzania, it just might get harder for married men who cheat

The Maasai village in Lanjani is home to 8,500 people and only 10 had been formally educated, Lynn said.

Lynn said the foundation is always education, and that’s why the project is important. And he adds that the school ended up benefitting him as much as it did the students, and he credits the project for making him a better husband and father.

“You know, you go somewhere, and you expect to help people and have an impact, and they end up having an impact on you,” he explains. “Their resiliency, their toughness, their attitude, their smiles. You see it and experience it, and it makes you appreciate what you really have.”