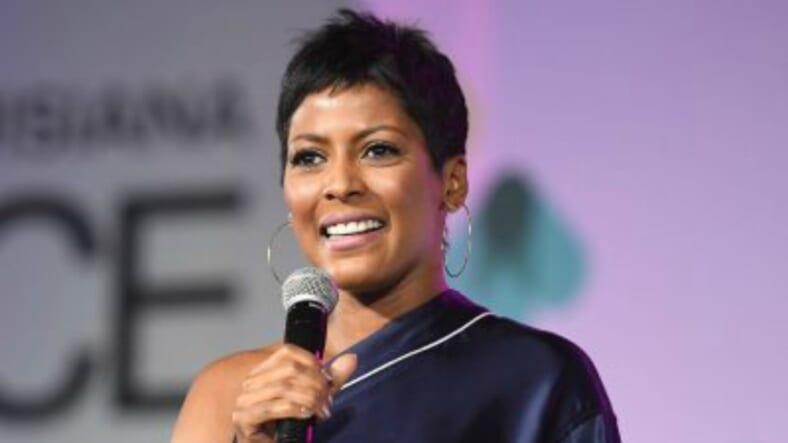 Tamron Hall responds to claims that she was angered by the delayed renewal of her talk show. (Photo by Paras Griffin/Getty Images)

On Friday, reports began to circulate that reporter turned talk show host Tamron Hall was not only angry that another show was renewed before hers, but that she was difficult to please. Hall has since come forward and denied the claims.

The Daily Mail claimed in an exclusive report that a source told them that Hall had a whole fit when she found out Kelly Clarkson‘s show was renewed before hers. The source also claimed that Hall blamed the crew for the snub.

“‘We would have gotten an early renewal too if you were all doing a better job!'” The source reportedly told the Daily Mail.

According to the Daily Mail, the Tamron Hall Show premiered on the same day as the Kelly Clarkson Show with a solid 1.4 rating, but that has since dropped to 1.0 while Clarkson’s show has been able to maintain a 1.5 rating.

“She wasn’t mad per se that Kelly’s show got picked up for a second season,” the source continued, “but she’s apparently frustrated with the direction of her show and afraid of it becoming a failure after walking away from her job at NBC and banking everything on this opportunity working.

On Friday, Hall posted a screenshot of the Daily Mail headline to her Instagram and decided to take the opportunity to set the record straight. In her caption, she released a statement denying the claims made in the article.

“It’s ironic that a few days after I said on my show that I’ve seen ‘men storm out of rooms, puffing and huffing, and no one says anything’ while ‘women [who] speak up [are viewed] as difficult’ that someone would leak a false story about me being difficult,” Hall wrote in a statement on Instagram. “As I said live on my show while defending Gabrielle Union, women are perceived as ‘difficult’ when they speak up. I have never once complained about Kelly’s renewal – I am so happy for my fellow Texan. I’m excited about my show and I can’t wait for season 2!!”

In a second Instagram post, Hall posted a video clip from her show where she talked about how difficult it is for women to speak up.

Flashback Friday #fbf to @tamronhallshow Tuesday. The “difficult” conversation and women in case you missed it. As we say on the show “let’s talk about it”. See yall Monday.

As for her show, Disney, who owns ABC, released a statement to the Daily Mail gushing over Hall’s show and showing no signs of stopping things anything soon.

“We had an extremely successful launch” the statement said. “Disney, Tamron, and Bill Geddie are all very pleased with the direction and performance of the show, and we look forward to our continued success.”