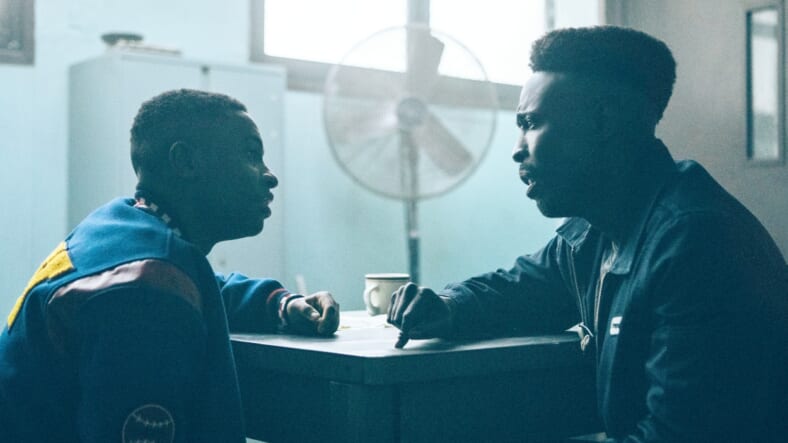 Caleel Harris as Young Antron McCray and Michael K. Williams as Bobby McCray in a scene from “When They See Us.” (Atsushi Nishijima/Netflix via AP)

Golden Globes so white, and male.

“When They See Us,” Ava Duvernay’s limited Netflix series that recounts the stories of the five Black teenagers, dubbed the Central Park Five, who were wrongly arrested and convicted of raping a jogger in Central Park, was completely shut out of the 2020 Golden Globe Awards, reported Variety. So was “Queen and Slim,” considered a long shot but a worthy indie film by first time director, Melina Matsoukas, and screenwriter, Lena Waithe. In fact, the tone-deaf Hollywood Foreign Press Association continued its tradition of nominating all-male directors.

READ MORE: Did “When They See Us” get robbed at the Emmys?

And this flies in the face of “When They See Us” receiving 16 nominations at this year’s Primetime Emmy Awards and scoring two wins – one for casting directors, Aisha Coley, Billy Hopkins, and Ashley Ingram and another for lead actor, Jharrel Jerome, who played the role of Korey Wise, one of the convicted five.

This has us pondering, when will they see us?

HFPA blocked the hit series from the best television miniseries or movie category, instead opting to nominate the all-white cast on “Catch-22,” “Chernobyl,” “Fosse/Verdon,” “The Loudest Voice” and “Unbelievable,” Variety reports.

“Catch-22,” produced by George Clooney, reportedly took the category by surprise. The miniseries about World War II only scored two nominations at the Emmys, and those were for sound editing and visual effects.

READ MORE: “Queen and Slim”: 4 Things we could all learn about critiquing Black Art

And we did smile when we read Beyoncé’s “Spirit” from “The Lion King” is up for Best Original Song.