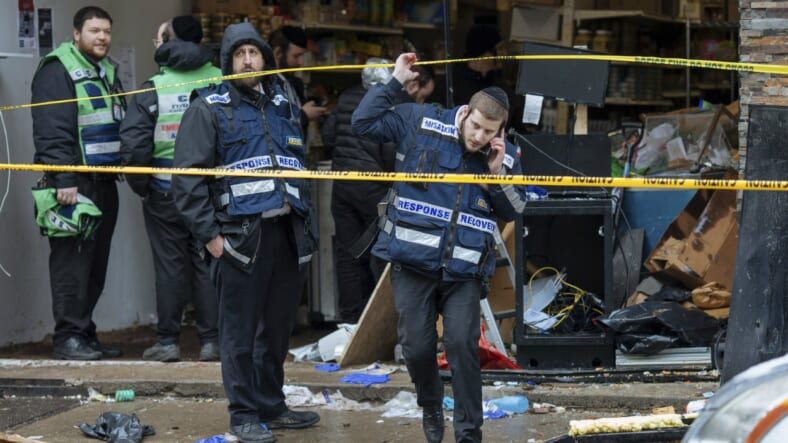 Responders work to clean up the scene of Tuesday's shooting that left multiple people dead at a kosher market on Wednesday Dec. 11, 2019, in Jersey City, N.J. (AP Photo/Kevin Hagen)

New Jersey officials have confirmed that they believe the killers in yesterday’s Jersey City gun massacre are also prime suspects in the murder of an Uber driver in nearby town of Bayonne.

According to the Associated Press, Wednesday, during a news conference with other officials, New Jersey Attorney General Gurbir Grewal revealed that the two Jersey City attackers are prime suspects in the death of a man whose body was found in a car trunk over the weekend.

Saturday evening, Bayonne police found a man in the trunk of a Lincoln Town Car while responding to a report. The victim, who had head injuries and was pronounced dead at the scene, was later identified as Michael Rumberger, 34, of Jersey City.

Grewal confirmed that the Jersey City attackers, David N. Anderson, 47, and Francine Graham, 50 were both found dead at the scene of the attack at a kosher market Tuesday in Jersey City, along with three victims. Jersey City police Det. Joseph Seals, 40, was killed in the gunfire exchange.

#BreakingNews killers in jersey city gun massacre yesterday are prime suspects of the murder of an uber driver in bayonne over the weekend– NJ authorities. this is a photo of david anderson from 2011– one of the 2 killers who were shot and killed yesterday. pic.twitter.com/A2StzsYtvX

Wednesday, Jersey City mayor Steven Fulop also said that the two assailants that left six people dead during a furious firefight, are believed to have targeted the Jewish market where the incident took place, leading many to suspect that this was an anti-Semitic attack.

Officials are also investigating potential connections between the assailants and the Black Hebrew Israelite movement; a group that has been known to be vocal and public critics of whites and Jewish people. Law enforcement is also scouring social media accounts tied to at least one of the gunmen in hopes of gaining insight on a motive.

Although the Southern Poverty Law Center has labeled the Hebrew Israelites an extremist group, the mayor has refrained from calling Tuesday’s attack anti-Semitic. The state attorney general, who is running the investigation, and local law enforcement authorities have also held off on confirming that the shooters specifically targeted Jews.