Teenagers take photo with Black boy and title it, ‘A Ghetto Christmas Carol’

Five-year-old's mother wants to know why these two white girls thought that joke was funny and asks, 'Why? Because he’s Black?' 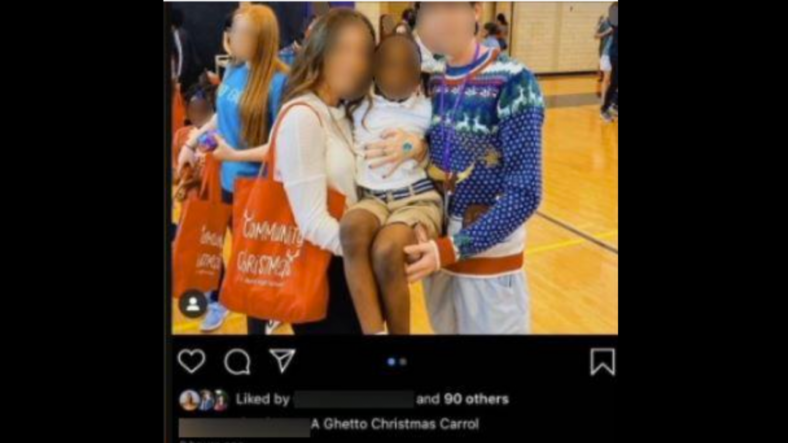 A Black Louisiana mom is questioning why two white high school students took a picture holding her five-year-old child and uploaded it to Instagram under the caption “A Ghetto Christmas Carol.”

KTBS reports the recent incident happened at Byrd High School. Sharon Martin, of Shreveport, said her family was attending a recent Christmas event at the school and was later shocked when she saw the offensive photo caption.

“Really? Ghetto?” Martin said in an interview with the station. “Why? Because he’s black?”

“I don’t know if they were trying to be funny or what,” Martin added in the KTBS interview. “I don’t get it. Like why would they just write that? They could have left the ghetto part out and I would have been probably okay with it.”

The young boy’s cousin, Danny Martin, also questioned the rationale behind the caption.

Sharon Martin said she never gave the school consent to take pictures of her son and had actually instructed them not to – a double whammy in her book.

“I don’t want my kids on any of that,” Martin said, referring to social media. “They’re not old enough to speak for themselves so, no.”

The photo has since been removed from IG, however, the mother of the teenager who posted the caption told KTBS, in a statement, that she is sorry for her son’s actions. The station did not reveal the identity of the mom or her son.

“Our son was referring to the title of a song that is popular among teens,” the mother reportedly says in the statement. “He had no intention of being malicious or hurtful to anyone, especially the child photographed, whom he has already written a letter to apologizing for the whole incident. Although he did not intend to be hurtful toward anyone, his father and I feel that some counseling regarding cultural sensitivity is warranted.”

The Caddo Parish School Board also released a statement on the incident.

“The administration of Byrd was made aware of the post and immediately took action, contacting the parents of the student and the student,” the statement read. “The post has been taken down. Caddo Schools does not condone and strongly opposes the comments made by the student. While we cannot speak to individual student disciplinary actions, administration has addressed the situation.”