Feds fear R. Kelly may seek retaliation against alleged victims while in prison 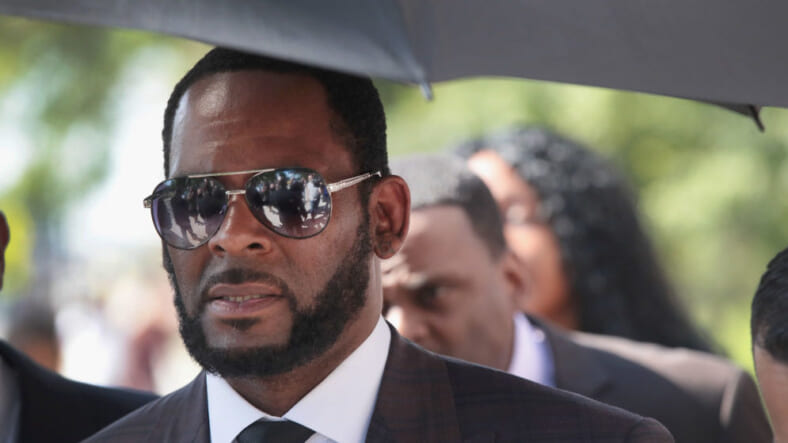 R. Kelly leaves the Leighton Criminal Courts Building following a hearing on June 26, 2019 in Chicago, Illinois. Prosecutors turned over to Kelly's defense team a DVD that alleges to show Kelly having sex with an underage girl in the 1990s. Kelly has been charged with multiple sex crimes involving four women, three of whom were underage at the time of the alleged encounters. (Photo by Scott Olson/Getty Images)

Embattled R&B artist R. Kelly is falling further into the scrutiny of federal officials who say they have reason to believe that he may be attempting to intimidate his alleged sexual misconduct victims.

Rap music industry website All Hip Hop reported that Kelly has been attempting to get the identities of Jane Doe 2 and Jane Doe 3, which he claimed was because it would help him build his defend. Lead federal prosecutor Richard P. Donoghue believed that Kelly may have something else in mind behind his motives.

“There is a significant incentive for the defendant to tamper with witnesses in order to try to avoid spending a significant period of time in prison,” Donoghue said.

Government officials have argued that Kelly’s “egregious history of obstructive conduct,” have given them reason to believe that he may intimidate witnesses by threatening harm.

In July, Kelly was charged in New York on an indictment where he faced federal charges for allegedly coercing and transporting women and girls across state lines to engage in illegal sexual activity. CNN reported that the singer plead not guilty to a host of other charges that included counts of racketeering, kidnapping, forced labor and sexual exploitation of a child.

Kelly, 52, recently faced additional charges of bribery for his 1994 marriage to the late singer Aaliyah, who was 15 at the time, while he was 27. He is accused of obtaining a false ID prior to his marriage to the teen star. He has pleaded not guilty to the federal racketeering charges.

According to All Hip Hop, federal officials believed that members of Kelly’s “enterprise” are still waiting on orders from him to begin a campaign of intimidation. These beliefs are not far-fetched considering that Kelly’s former manager, James Mason, was accused of threatening to kill a victim and him whole family. Kelly’s former business manager, Derrel McDavid, was accused of hiding his illegal activities and paying out thousands to victims and their families to keep them quiet.

“The defendant continues to have access to significant resources and Enterprise members acting on his behalf,” Donoghue said.

In spite of their fears, prosecutors are planning to release the names of the two unidentified victims two weeks before the singer’s trial begins.