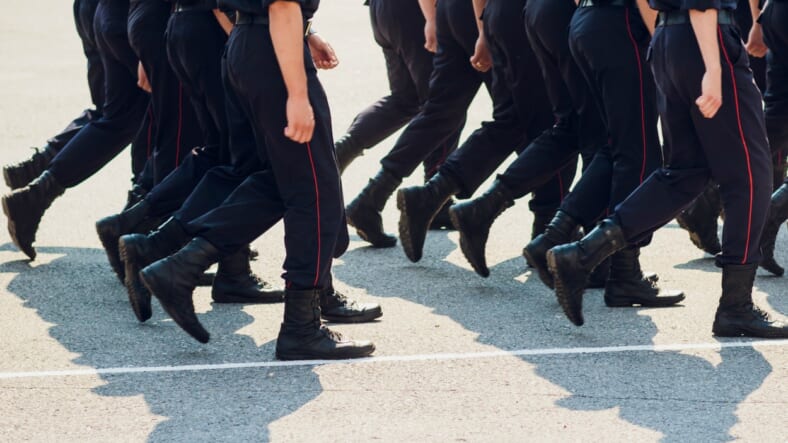 A photo of West Virginia correctional officer trainees giving an apparent Nazi salute, which went viral has the trainees’ faces blurred. But what’s clear is the punishment handed down to them this week: They’re all fired.

NBC News reports West Virginia Gov. Jim Justice announced Monday that he was approving the recommendation to fire more than 30 people investigated after the photo of one of the training classes was released — by the department in charge of training the officers — in December. Some 30 of the trainees posed with their right arms raised in the gesture, with the words “Hail Byrd!” at the top of the photo.

“Byrd” was not identified further when the photo was released and when a state investigation was opened soon afterward, according to NBC News. However, she was found to be one of the class instructors who, according to the investigators, told a department secretary that the students were saluting her like that “because I’m a hard-ass like Hitler.”

A secretary reported in an investigation that she asked the instructor, “What are you all doing in the picture?” To which Byrd responded, “there is nothing wrong with it, we have people of all colors and backgrounds in the picture and every one of them are participating.”

The state did not release the names of everybody who was fired as a result of the photo. But almost immediately after the photo went public, two trainers and one trainee in West Virginia’s Division of Corrections and Rehabilitation, which oversees the cadet training, were fired, and 34 others were suspended without pay.

Also, firings and suspensions were handed out to those who knew about the photo and failed to report it at all, or to report it to the proper authorities, the report found.

The report, conducted by Jeff Sandy, the secretary of the state’s Department of Military Affairs and Public Safety, claimed that some of the cadets “only followed what they perceived to be an order’’ and “feared they would not graduate, or would be disciplined’’ for not following it.