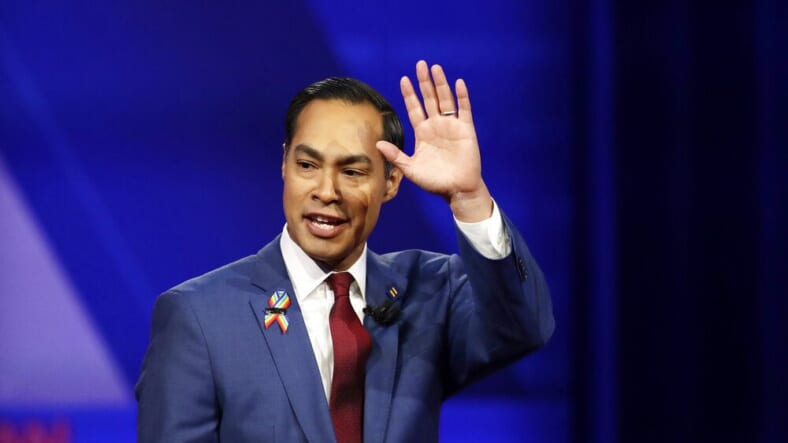 FILE – In this Oct. 10, 2019 file photo, former Housing and Urban Development Secretary and Democratic presidential candidate Julian Castro waves as he takes the stage during the Power of our Pride Town Hall in Los Angeles. (AP Photo/Marcio Jose Sanchez)

By PAUL J. WEBER and COREY WILLIAMS Associated Press
AUSTIN, Texas (AP) — The 2020 Democratic presidential primary initially featured the most racially diverse field in history. Now, with one month until voting begins, the top tier of candidates is all white.

Candidates of color have rapidly seen their fortunes fall over the past month. On Thursday, Julián Castro, the only Latino in the race, called it quits. Sen. Kamala Harris, a black woman, exited the race in December. Sen. Cory Booker, another black candidate, failed to qualify for the last debate, and both he and Andrew Yang, an Asian American entrepreneur, are at risk of missing out on the next forum.

The trajectory has frustrated and confounded Democrats, a party that counts on broad support from minority voters in presidential elections. It’s also raised concerns that issues facing minority voters could be marginalized during the White House race.

“When the field becomes less diverse, there’s going to be a shift from poor folks and voters of color and the need to engage them and get them excited about the Democratic ticket,” said Sonja Diaz, founding director of UCLA’s Latino Policy and Politics Initiative. “It leaves a gap in the party’s capacity to meaningfully address the policy issues that are relevant to voters of color.”

Castro, 45, ran as an unabashed liberal who courted the party’s ascendant left wing, and he was one of the most vocal candidates when addressing issues affecting the nation’s poor. He pushed his rivals to embrace decriminalizing border crossings, and the former Obama housing secretary was the first to call for President Donald Trump’s impeachment.
But Castro left less of a mark on voters: He languished around 1% in polls throughout much of his yearlong campaign and by October had raised less than $8 million total.
The remaining candidates of color have sought to raise the alarm about the declining diversity of the Democratic field.

When Harris dropped out of the race last month, Castro said the California senator had been held to a different standard by the media — one that he called “grossly unfair.” He said women and candidates of color were being pushed aside in the race because of what he called “the media’s flawed formula for ‘electability.'” He also ran an ad in majority-white Iowa, arguing that the state should no longer vote first in Democrats’ nominating process because it doesn’t reflect the diversity of the party.

After Castro ended his campaign on Thursday, Booker sent his supporters a fundraising appeal, bemoaning “yet another person of color exiting a field of candidates that began as the most diverse in our nation’s history.”

Yang, a political novice, has had some unexpected success. He announced Thursday that he had raised $16.5 million in the final three months of 2019, a formidable sum that could allow him to stay in the race for months to come.

Hawaii Rep. Tulsi Gabbard, who’s American Samoan and Hindu, and Deval Patrick, who was the first black governor of Massachusetts, also remain in the race.

Jeronimo Cortina, a political science professor and associate director of the Center for Mexican American Studies at the University of Houston, said the remaining candidates of color still have an opportunity to engage minority voters in a way that “will be completely different than how they engage middle-aged white male or white female voters … bread and butter issues, being able to pay kids’ way through college and not lose your house, and this is how we are going to do it.”

And minority voters say they are eager for that perspective.

“I think that it helps to give a different viewpoint of what’s happening in our country to have a … person of color or a woman in that role, and I think it’s important in the long run as a country,” said Zuri Finlayson, 31, a manager of a Milwaukee coffee shop who is black.
To Mabel Tucker, a retired surgery aide from Milwaukee, having a person of color or woman on the ticket isn’t as important as having someone who represents her views.

“Health care, the minimum wage needs to be raised,” said Tucker, who also is black. She said most candidates aren’t talking enough about those issues.
___
Williams reported from Detroit. Associated Press writer Ivan Moreno contributed from Milwaukee.
___
Catch up on the 2020 election campaign with AP experts on our weekly politics podcast, “Ground Game.”