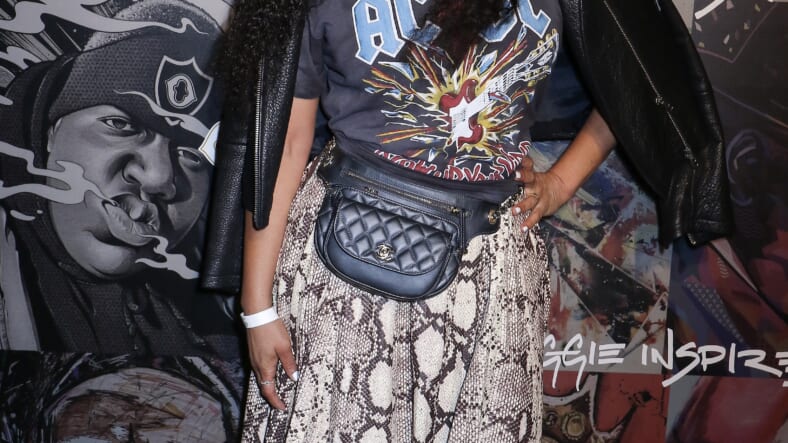 R&B songstress, Faith Evans, says Lifetime told her a documentary on her and Biggie’s marriage would be positive but that the finished product is anything but.

Evans told Page Six that she feels betrayed by Lifetime’s upcoming documentary titled “Biggie and Faith Evans,” part of the network’s Hopelessly in Love series. She said she would have never participated had she realized it would rehash old, sensational news – like his rumored affairs with Lil’ Kim and Charli Baltimore and his West Coast rivalry with Tupac Shakur.

“I feel upset that I’m attached to it. I was told that it would be a positive piece with a little more of my personal background. It wasn’t pitched to me as a story rehashing the sensationalized events that took place,” Evans told Page Six. “I am beyond that and have no need to open old wounds, damage repaired relationships and, above all, soil the legacy of Christopher Wallace a.k.a. the Notorious B.I.G.”

The two-hour documentary will air on Jan. 10. A promotional trailer calls their relationship “the most controversial love story in hip-hop history,” and promises the documentary is from “those who lived it.” The promo adds “Faith Evans is ready to confront her pain and revisit the most intimate moments of their relationship . . . from their whirlwind engagement to Biggie’s ongoing affairs with Lil’ Kim and Charli Baltimore, to the East Coast-West Coast rivalry that led to Tupac and Big’s deaths.”

Evans is not here for it.

“The Tupac stuff, the different women — how many times are people going to talk about that? It was supposed to be a love story, and it turns into cheating and (Lil’) Kim. We’ve come so far past that. (Lifetime’s) all about drama,” Evans told Page Six.

Biggie and Evans were hip hop royalty nearly three decades ago. The couple, who were on the same Bad Boy Records label, wedded in 1994 after an eight-day romance. Although they separated, they remained married and were so at the time of his death in 1997.

“Ms. Wallace is pissed. Everyone was blindsided. She has worked very hard for his legacy to be acknowledged in a more positive light. He’s nominated for the Rock & Roll Hall of Fame. This (documentary) is taking steps backward,” Evans said.

Lifetime did not respond to Page Six’s multiple requests for comment.

Evans said she won’t be promoting the doc because she’s not proud of it.

“It’s about my morals. I would never do business I’m not proud of at this point in my career. I’m not happy,” Evans told Page Six.

READ MORE: Johnny Depp’s movie about Biggie Smalls and Tupac is shelved before it even hits theaters

On Lifetime’s web site, Hopelessly in Love is a limited series that takes a look at some of pop culture’s most infamous love stories. In addition to Faith and Biggie, the show will also run episodes on Anna Nicole Smith and Larry Birkhead and Lisa “Left Eye” Lopes and Andre Rison.