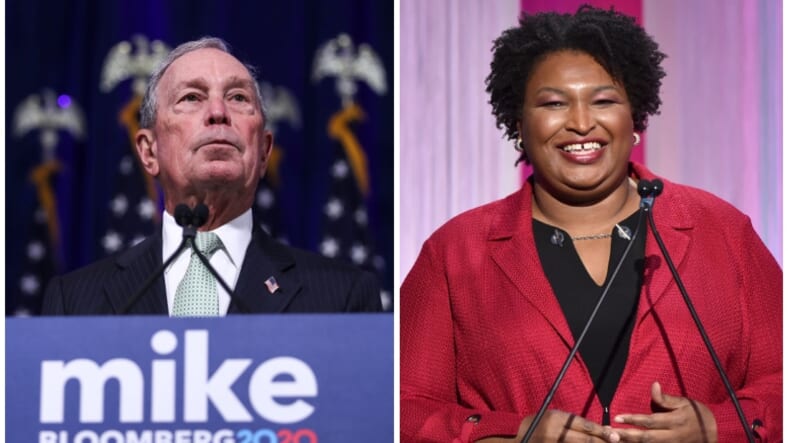 For the first time since announcing his 2020 presidential run in late November, Michael Bloomberg visited Atlanta, GA. On Friday, the Presidential nominee hopeful kicked off his schedule with an early morning stop at an invite-only voting rights summit organized by Stacey Abrams‘ Fair Fight 2020 Initiative. While there, Bloomberg shared detailed thoughts on voting and voter suppression with the handful of media outlets in the room.

Those unaware of the history between Bloomberg and Abrams might raise an eyebrow at their alliance. Bloomberg, however, has been a long time and an early financial supporter of Abrams. She shared that history as she introduced him to the attendees. According to Abrahams, when she launched the New Georgia Project in 2014 intending to register 800,000 unregistered voters in the state by 2024, Bloomberg was a generous donor. Then in 2018, when Abrams dared to run for governor of Georgia, a feat that would have made her the first Black woman to hold that position in this country, Bloomberg donated significantly to her campaign.

In December 2019, the former New York City Mayor donated $5 million to her Fair Fight 2020, which the Spelman and Yale Law School alum launched months earlier in August to focus on voter protection in 20 battleground states for the 2020 election cycle. Among those states is Georgia, where voter suppression was alleged in Abrams’s slim loss to Republican Brian Kemp, who also served as Secretary of State monitoring that same election. In closing, she presented Bloomberg as “our friend” and “a friend of America” to the group.

At the podium, Bloomberg initially floundered when he spoke of the Atlanta Falcons while referencing his first Georgia visit with Mayor Hardie Davis, Jr. in December. When he turned the focus on voter suppression, he finally gained traction with the group.

“I think it’s fair to say that we all wish that we didn’t have to have this conference,” he told attendees. “If voter suppression wasn’t such a big problem, Stacey wouldn’t have started Fair Fight; she would be in the governor’s mansion.”

Continuing he said, “Unfortunately, voter suppression is one of our most urgent challenges. And the right to vote is a fundamental right that protects all others. And it’s under attack around this country.”

“The history of voter suppression, as we all know, is long and ugly,” he shared. “There are grandfather clauses and literacy tests and poll taxes. That may not officially be on the books anymore, but, even today, in 2020, there are eight states, including Georgia and four others, that have never ratified the 24th amendment banning poll taxes. Just think about that, in this day and age.

“Now, some people may say, ‘well, so what’s the point? It’s already in the Constitution,’ and that’s true, but I’ll tell you the point is eight southern states also held up on ratifying the 19th Amendment, which guaranteed women the right to vote, and it took some 50 or 60 years before they eventually all did. And so why not on poll taxes? We just got to get to work here and we can get this done. . . Is it just a coincidence that states like Georgia and Mississippi haven’t ratified it while they’ve also engaged in some of the strongest suppression efforts?”

Bloomberg didn’t reference President Donald Trump specifically, but he did take shots at Republicans overall. “The reality is you can draw a straight line from Jim Crow poll taxes and to the Republican party today. And I don’t know why they think this, but they do. It’s a disgrace to our Constitution. It’s an insult, I think, to the generations of people who fought, marched, for the right to vote. And since we’re in Georgia, I’m particularly thinking of a true American hero, Congressman John Lewis, who marched,” he said, generating applause.

“America is a wonderful country, but we’ve got to keep working to make it better and make sure we get rid of some of the things that we don’t do well. We should never ever keep anybody from voting. I think it’s very simple. We’ve got to make sure that everybody can register. Same-day registration and electronic registration make a lot of sense to me. Also allowing 17-year-olds to pre-register so that, when they’re 18, they can start voting. The big question I suppose I keep asking is, why should we have to register it all? After all, the government knows who’s 18. Why does it make us fill out another form? And, particularly, I don’t understand why the Republicans want to do it [if] they’re always supposed to be in favor of smaller government and less bureaucracy. It just doesn’t make sense.”

As Bloomberg began closing out, he informed the small crowd that popular Georgia native, former President Jimmy Carter, was also an early supporter of automatic registration. “We should actually make it easier to vote. You should be able to vote from your home,” he said. “Why you have to go to the polls, I don’t know. Why do you have to do it just on election day? And, there are a whole bunch of things that we can do to make it easier for everybody to vote. And if everybody votes, I think we’ll always get better government.”

After his address, Bloomberg and Abrams exited the room together.