Ava DuVernay thanks Critics’ Choice for ‘seeing us’ at awards show

The 'When They See Us' director also thanked Netflix for letting 'a Black woman do her thing!' 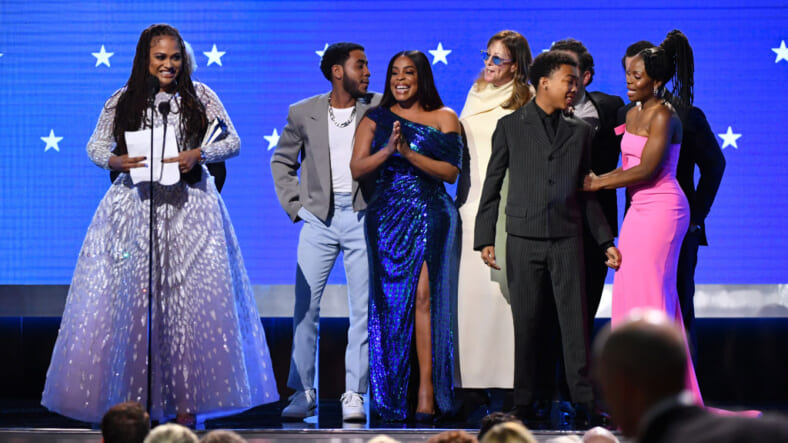 SANTA MONICA, CALIFORNIA – JANUARY 12: Ava DuVernay (2nd L) and fellow cast and crew of ‘When They See Us’ accept the Best Limited Series award for ‘When They See Us’ onstage during the 25th Annual Critics’ Choice Awards at Barker Hangar (Photo by Amy Sussman/Getty Images)

Ava DuVernay is finally getting celebrated for her Netflix miniseries When They See Us.

At the 2020 Critics’ Choice Awards, the important series that humanized the five teenagers, now men, who were wrongly arrested and charged with raping and beating a New York City jogger in Central Park, received the most nominations out of any show. This comes after DuVernay was completely shut out of the 77th annual Golden Globes, as were other Black actors and directors.

DuVernay, who won the Critics’ Choice award for “Best Limited Series,” received a standing ovation from the crowd. She gave thanks for the recognition and the inclusivity of the awards.

A lovely night to remember. Thanks to @CriticsChoice for seeing us. xo pic.twitter.com/tIw4E3RtCu

“Thank you to the critics for finally letting us take the stage. Yes!” DuVernay said with enthusiasm. “We made a four-part, five-hour film. It was an act of love. 179 actors, 117 of them had speaking parts. 312 members of the crew, my three co-writers, my comrades at ARRAY, my fellow producers at Participant, Tribeca, and Harpo, and our great champions at Netflix who let a Black woman do her thing, what can I say? Thank you so much.”

The miniseries gave us a glimpse into the real-life hell of the five teenagers, Raymond Santana, Kevin Richardson, Antron McCray, Yusef Salaam, and Korey Wise, who each spent years in prison for a crime they never committed. They are now referred to as the “Exonerated Five.”

“This series began with a tweet from Raymond Santana, and now he, Antron, Kevin, Yusef, and the mighty Korey Wise stand for something larger than they ever imagined. They stand for justice, they shine bright like the gems that they always were, but we never saw,” DuVernay continued in her Critics’ Choice acceptance speech. “If you watched their story and felt something in that moment, I invite you to consider doing something. There’s no right thing to do. Do what you feel where you are, but don’t let your anger and sadness be all. Cases like this are happening all around the world, in this country most specifically on our watch. People who are poor and innocent are behind bars while the rich and guilty walk free and gain power.”

Jharel Jerome, who played Wise in the series, also took home a critics award for “Best Actor in a Limited Series.”

Later, Ava tweeted “A lovely night to remember. Thanks to @CriticsChoice for seeing us. xo”

A lovely night to remember. Thanks to @CriticsChoice for seeing us. xo pic.twitter.com/tIw4E3RtCu