State's Attorney Marilyn J. Mosby, who was “disgusted” by the video of the attack on the officer, lashed out at "continued inappropriate political rhetoric" by police union. 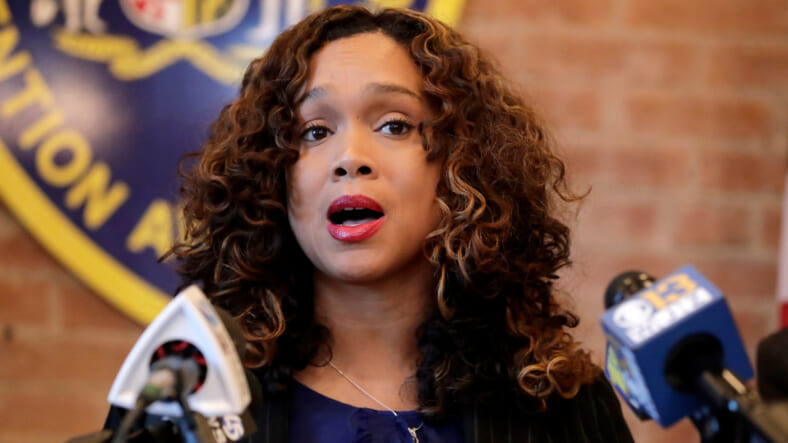 When a video went viral on Saturday of a Baltimore police officer being kicked by bystanders while he wrestled with someone he was arresting, another kind of pile-on ensued. Police union leadership seized the moment to call for new city leaders.

State’s Attorney Marilyn J. Mosby, who was “disgusted” by the video of the attack on the officer, later lashed out at the city’s Fraternal Order of Police’s “continued inappropriate political rhetoric, fanning the very flames they then call on me to put out,” she said, according to The Baltimore Sun.

“Their responses are relentlessly divisive, and they seem to lose no opportunity to misplace blame,” Mosby continued. “Our city desperately deserves better and needs to move past such divisive rhetoric, and hypocritical finger-pointing.”

The union and its president, Sgt. Mike Mancuso, issued a statement earlier in the day, Fox News reported, directly indicting Baltimore’s elected officials: “Crime in Baltimore is out of control, and until new leadership is elected and appointed, this lack of respect for the law and those who enforce it will continue and deepen.”

Mancuso and the union have frequently issued inflammatory reactions in recent years, as the homicide rate in Baltimore has climbed to record rates and elected officials, including former Mayor Catherine Pugh, have been accused of corruption (Pugh resigned last year and later pleaded guilty to federal charges). In addition, the police themselves have come under fire for their own corruption, including convictions connected to the Gun Trace Task Force.

Mosby seemed to have that in mind in her statement: “The same sense of outrage in this case should be expressed by the leaders of the police union when their officers are convicted of attempted murder, assault, and unlawful arrest against citizens.’’

Mosby came to prominence, and raised the ire of city police, in 2015 when she indicted six officers on charges in connection with Freddie Gray’s death in police custody, charges which followed several days of unrest after Gray’s death. None of the six were ever convicted, however.

Mosby, Mayor Jack Young and Police Commissioner Michael Harrison publicly condemned the actions on the video, but, among others, Mancuso and Gov. Larry Hogan had added on pointed criticism of city politicians.

To the mayor, Mancuso said in an additional statement: “We all know the truth is that you are way in over your head! Attacking me is just another attempt to take the heat off your failed leadership.”