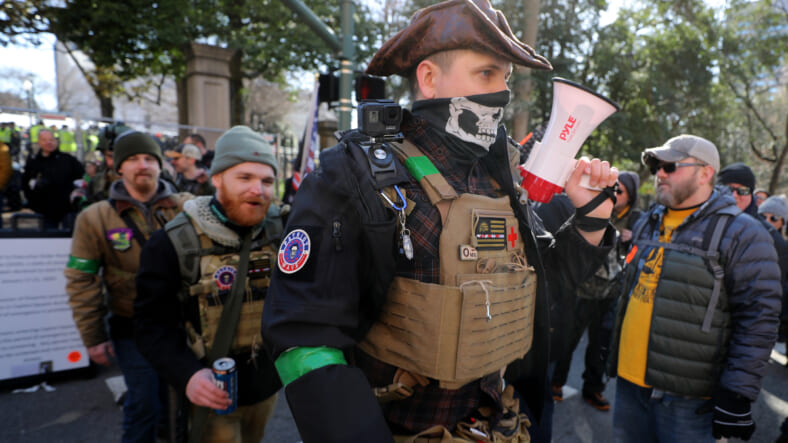 Gun-rights supporters are in Richmond for “Lobby Day” opposing legislation that would limit the access to firearms in Virginia. In response, Democratic governor Ralph Northam declared a temporary state of emergency that would ban open and concealed carry on state capital grounds, CNN reports.

The crowd did not engage in violence by the end of the march at noon Monday, the report notes.

Outside the secured rally area, stood additional supporters, who were not restricted to the state of emergency order banning open carry. Within that group “Northam out” chants can be heard. Throughout the area is a heavy police presence, with law enforcement also positioned on rooftops. Seen are protestors with rifles and signs promoting gun rights.

The Virginia Citizens Defense League is promoting a “peaceful event” for their annual gun rally, NBCNews writes. The crowd, however, is expected to be larger due to Democrats’ Legislature control. On the table are several gun control bills that would limit handgun purchases and put into place background checks. The rally began at 8 am and ended at 12 pm.

“We want to do things the peaceful way,” one protester said to The Daily Mail. “And that’s what this is but it’s not the only way.”

“The next challenge is to keep this passion going and turn it into votes,” said Brad Slaybaugh of Colonial Heights. “What we’re standing up for here is the American ideal and too many people have forgotten what that is.”

I just can’t imagine hundreds of heavily armed black and brown people descending on Virginia and this country just taking it so casually with a smattering of police at their rally.

Twitter users used the #VirginiaRally hashtag to details the sights of the rally. Tweets were critical of protestors who are in open support of the second amendment but hiding their faces in masks.

Richmond, Virginia hasn’t seen this many armed white men since the Confederate army abandoned the city on April 2, 1865. #VirginiaRally #RVA

The proposals are prompted by a Virginia Beach mass shooting that saw a city employee kill 12 people in a municipal building.

Before the rally, law enforcement arrested three neo-Nazi group members on the East Coast, who were planning to attend. Four additional members were arrested across Georgia and Wisconsin.

President Donald Trump tweeted in regards to the legislate on Friday, “Your 2nd Amendment is under very serious attack in the Great Commonwealth of Virginia.” The message was seen as instigating a potentially tense rally by residents. Trump would also issue a tweet Monday morning, while also encouraging a republican vote in 2020.

“The Democrat Party in the Great Commonwealth of Virginia are working hard to take away your 2nd Amendment rights. This is just the beginning,” Trump tweeted. “Don’t let it happen, VOTE REPUBLICAN in 2020”

A crowd size estimate is currently not available. Streets that are around the capitol grounds are said to be packed with protestors.