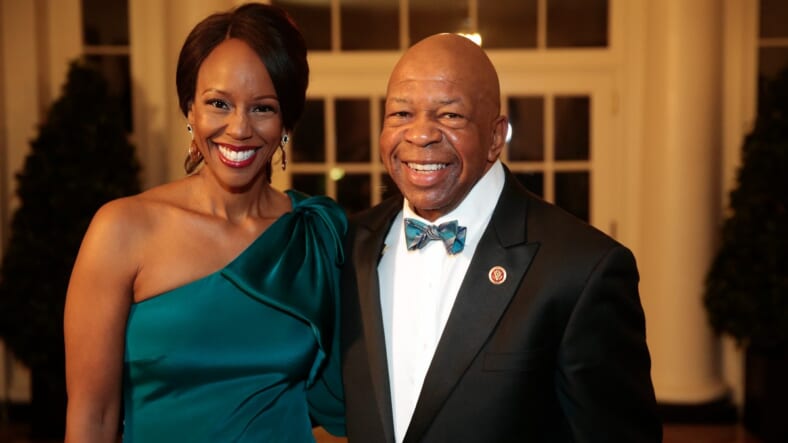 Representative Elijah Cummings, a Democrat from Maryland, right, and Maya Rockeymoore Cummings arrive to a state dinner hosted by U.S. President Barack Obama and U.S. first lady Michelle Obama in honor of French President Francois Hollande at the White House on February 11, 2014 in Washington, DC. Obama and Hollande said the U.S. and France are embarking on a new, elevated level of cooperation as they confront global security threats in Syria and Iran, deal with climate change and expand economic cooperation. (Photo by Andrew Harrer-Pool/Getty Images)

Maya Rockeymoore Cummings, the widow of Congressman Elijah Cummings, said Donald Trump’s attack on her husband “hurt him at his worst moment.”

Rep. Cummings, who chaired the House Oversight Committee and was heavily involved in Trump’s impeachment inquiry, died five months after Trump tweeted that his congressional district, including Baltimore, was a “disgusting, rat and rodent-infested mess where no human being would want to live.” The impact of those words, and the subsequent hate mail by Trump supporters, came when Cummings was in the deepest throes of his illness, Rockeymoore Cummings told the ladies on The View.

Cummings served Maryland’s 7th Congressional District and had been a congressman since 1996.

“It hurt him deeply, and it hurt him at his worst moment,” Rockeymoore Cummings said. “Elijah was already battling health issues and so to have the president come out and do this at that time, you know … it really depressed him and it stressed him and I think it undermined his health.”

Meghan McCain, the daughter of John McCain, who died in 2018 of brain cancer and also had his run-ins with Trump, responded by saying “That is horrific. That is horrific. I’m sorry, that is just hard to hear” to which Rockeymoore Cummings replied: “It was our reality. And all of his minions out there you know … nasty tweets, death threats, you name it. We were going through it.”

Rockeymoore Cummings, 48, who now seeks to fill the remaining term of her husband’s congressional seat and to continue his causes, also revealed that she had recently undergone a preventative double mastectomy to “delay the inevitable perhaps but also prevent it.”

She said her mother had died of stage 4 breast cancer in 2015 and that last year, her sister was diagnosed with stage 2 breast cancer.

“I knew it was just a matter of time before it hit me. I felt like I had two ticking time bombs sitting on my chest and so what I wanted to do was to actually make sure I could do everything in my power to delay the inevitable perhaps but also prevent it,” she said on The View.