Brooklyn born congressman taps into his Hip-Hop roots to inform Donald Trump's lawyer, 'why we are here" 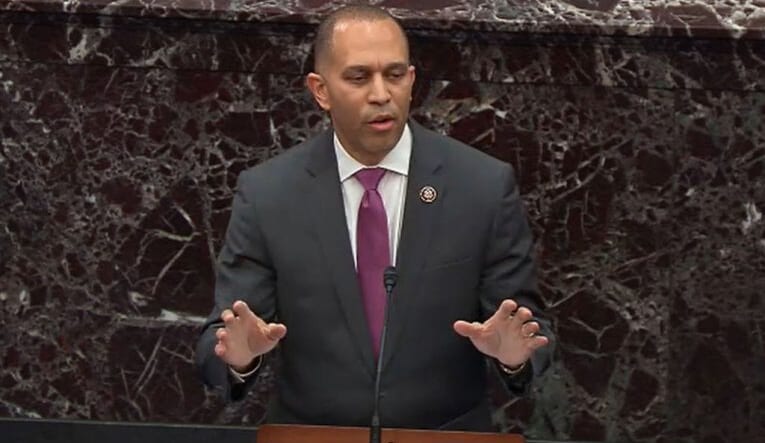 Rep. Hakeem Jeffries (D-NY) invoked the lyrics of Biggie Smalls during a speech on the opening day of President Donald Trump’s impeachment trial to urge senators to call witnesses to the stand.

Jeffries, a House manager for Trump’s trial, was responding to a question from Jay Sekulow, Trump’s attorney, asking him “why are we here?” when he queued up his response with some lyrical magic from The Notorious B.I.G., according to CNN.

“We are here, sir, because President Trump abused his power and then he tried to cover it up,” Jeffries told Sekulow. “And we are here, sir, to follow the facts, follow the law, be guided by the Constitution, and present the truth to the American people.”

Jeffries, who represents the 8th congressional district of New York, which includes Brooklyn where Biggie is from, added: “that is why we are here, Mr. Sekulow. And if you don’t know, now you know.”

Earlier in the speech, Jeffries made it clear to Sekulow that this impeachment trial will be about getting to the bottom of Trump’s alleged abuses of power.

Jeffries’ comments peppered an already factious start to Trump’s Senate impeachment trial with both Democrats and Republicans quarreling over the rules governing the trial. In his role as an impeachment manager, Jeffries is acting as a prosecutor for House Democrats presenting their case against the president.

Jeffries used his speech to urge senators to call witnesses to the stand during the trial, arguing that it’s in step with other impeachment trials in history, reported Newsweek.

Mainly, Jeffries wants senators to call Acting White House Chief of Staff Mick Mulvaney to testify, believing he has crucial evidence regarding Trump’s alleged involvement in temporary withholding $391 million in military aid to Ukraine. The White House is asserting executive privilege in seeking to block testimony from senior officials, according to Newsweek.

Other witnesses the Democrats hope to testify include John Bolton, former national security advisor, and Mike Pompeo, Secretary of State.

Republicans counter that may consider allowing witnesses to be called later in the trial, but not anytime soon.