Despite efforts from his family to preserve his life, Titus Cromer Jr., 16, transitions days after relocating to rehab facility 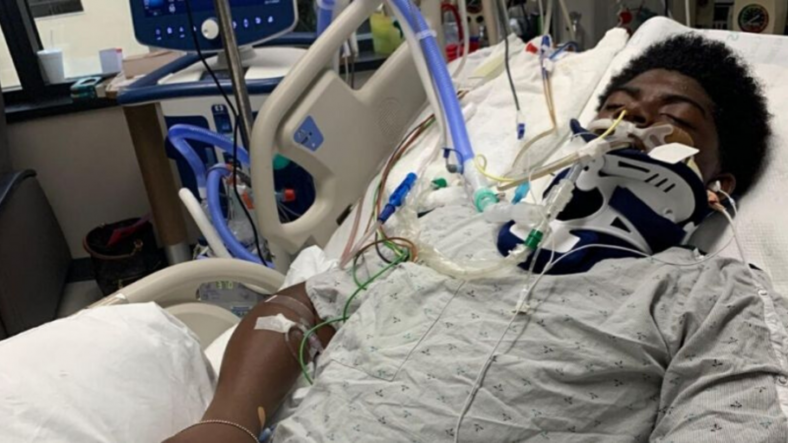 Titus Cromer in the hospital, photo courtesy of the family

A University of Detroit Jesuit High School student at the center of a court battle since October on whether he was legally brain dead has died.

Titus Jermaine Cromer Jr., 16, passed away on Friday, just days after he was relocated to a Livingston County rehabilitation center and had shown some signs of hope.

Titus’ mother, LaShauna Lowry, said while at the rehab center, Titus showed slight muscle contractions in his calves that weren’t there prior. She told the Detroit Free Press that it was a positive sign that her son was starting to recover.

“It’s a huge sign,” Lowry said to the Free Press. “My focus is just on my son healing, and him getting an opportunity to heal, so this is definitely an indication of that.”

But that was not to be.

“We are heartbroken to confirm that Titus Cromer passed away peacefully early Friday morning,” family attorney, James Rasor, told the Free Press. “Our thoughts are with his family and the University of Detroit Jesuit community as they mourn his passing and celebrate his life.”

Titus was taken to Beaumont Hospital in Royal Oak on Oct. 17 for a brain injury. A week later, tests indicated that he had no brain activity and doctors said he met Michigan’s definition of brain dead. The hospital said he wouldn’t recover and planned to remove him from life support.

However, Lowry insisted her son had some brain function as he could breathe without a ventilator for short spurts of time and was controlling his own blood pressure and body temperature.

Lowry sought an emergency court order to keep the hospital system from removing Titus from life support, and subsequently had him transferred to the rehabilitation center.

Last month, Titus underwent surgery for a tracheostomy. He also had a percutaneous endoscopic gastrostomy feeding tube inserted in his stomach. Both surgeries were requirements to get transferred to the rehab center.

According to the Free Press, Titus’ school also released a statement to its Facebook page over the weekend.

“The U of D Jesuit community is deeply saddened by the passing of Titus Cromer, Jr., ’21, who had been hospitalized since October. Please keep the Cromer family and Titus’ friends in your prayers. A school counselor will be available for students and families after tomorrow’s Family Mass & Breakfast. Also, support will be available on Monday at school to help us get through this difficult time.”