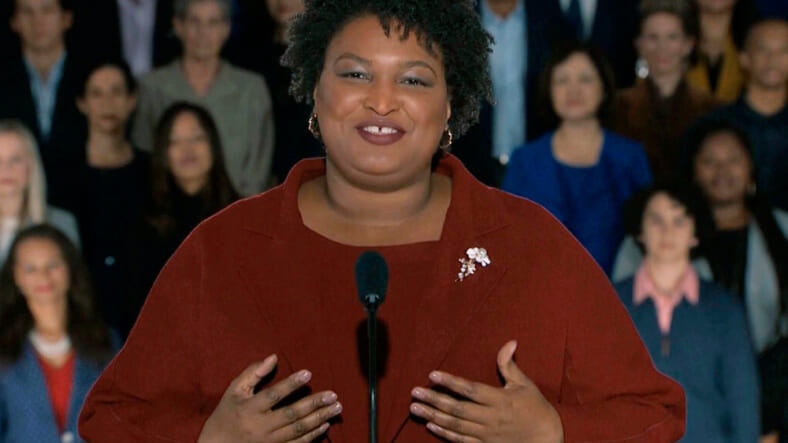 In this pool image from video, Stacey Abrams delivers the Democratic party’s response to President Donald Trump’s State of the Union address, Tuesday, Feb. 5, 2019 from Atlanta. Abrams narrowly lost her bid in November to become America’s first black female governor, and party leaders are aggressively recruiting her to run for U.S. Senate from Georgia. Speaking from Atlanta, Abrams calls the shutdown a political stunt that “defied every tenet of fairness and abandoned not just our people, but our values.” (Pool video image via AP)

Stacey Abrams, former minority leader of the Georgia House, has a prediction she believes will come true: becoming president.

In an interview with FiveThirtyEight for its “When Women Run” project, Abrams was asked of her political ambitions and whether the country will elect a black female president in the next 20 years, her answer: “Yes, absolutely.”

“That’s my plan and I’m very pragmatic,” she said with a smile.

Do you think the country will elect a woman president in the next 20 years?
Stacey Abrams: Yes.

READ MORE Stacey Abrams confirms she’d consider being VP: ‘I will not diminish my ambition’

Clare Malone inquired whether Abrams finds people questioning whether the country is ready for a black woman to take office tiresome.

“When something new is on the horizon, we are usually both equally curious and afraid. I don’t begrudge the question but I resent an answer that doesn’t accept the wholeness of who I am,” the Georgia Democrat said.

Believing that she is electable as president, she also shined a light on the barriers of the system, a system in which she has challenged with her focus on Fair Fight, an initiative she started to promote fair elections and voter suppression.

“I’m not solely an avatar for black women but I am a proud avatar of both of those things because it stands as an example to others of what’s possible,” Abrams said. “ But we also have to recognize that electability is not simply a question of whether you have the capacity and if people want you, it’s also if the system will allow it to happen.”

In November 2018, Abrams famously made waves during her run to become the nation’s first African American woman to become elected governor but lost the election by 1.4 percentage point. The then-Democratic nominee also refused to concede defeat against her opponent, Brian Kempt, a Republican secretary of state, describing him as an “architect of voter suppression.”

Malone posed the question around Abrams being discussed as a “potential vice presidential pick as a way to balance out a white nominee at the top of the ticket and how her race and gender placed first and foremost.

“I accept that I exist in the political zeitgeist in a very specific way,” she said.

Adding that questions surrounding that are raised and sustained around race and gender is due to “the story that lies behind it.”