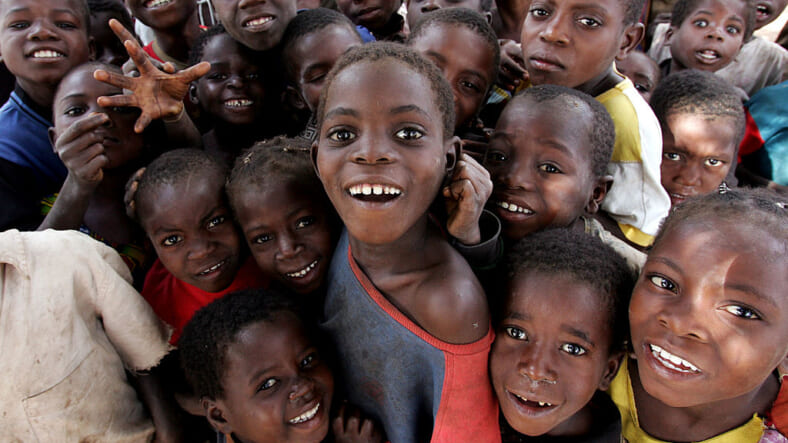 MOZAMBIQUE – JUNE 30: Children smile as they gather together in Mozambique. (Photo by Graeme Robertson/Getty Images)

Young Black people can now travel to Africa free of charge as part of a program that sees value in helping people of African descent discover and explore their heritage.

Birthright AFRICA, a New York City-based nonprofit, offers the free trips as a way to supplement the void left in American education about Africa and its descendants, according to CNN.

“National Black History Month often focuses on the past, but this is about creating an infrastructure so that we can help people transform their futures,” Diallo Shabazz, Birthright AFRICA co-founder, told CNN. “This isn’t about validating black identity. It’s about providing an opportunity for people to explore their ancestry.”

The trip includes stops at museums, cultural sites, and universities to learn about the “historic and present-day resilience and brilliance of their heritage often lacking in our school curriculums,” according to Walla Elsheikh, CEO and the other Birthright AFRICA co-founder.

Participants have to be a U.S. citizen between 13 to 30 years old and of African descent, including African-American, Afro-Caribbean, Afro-Europeans, Afro-Asian and Afro-Latinx, CNN reported.

The organization hopes to boost travel to the continent amongst young, Black people.

“Only 6% of study abroad students are black or of African descent. And only 2% of US managers, leaders, and entrepreneurs are of African descent,” Elsheikh told CNN. “To address this gap in diversity and talent, Birthright AFRICA is creating the next generation of global leaders and entrepreneurs that are proud of their African heritage, confident in their innovative aspirations and connected to the African continent.”

Shaina Louis, 23, of Haitian descent but born and raised in New York, took her birthright trip to Ghana two years ago while attending the City University of New York. She said she found closure and healing.

“Prior to Birthright AFRICA, I had a lot of pent up resentment and antagonism due to a history that I felt my people had no say in. For those of us in the diaspora, our history, according to the textbooks, starts with slavery. I was doubtful and kind of cynical about what the future held not only for me as an individual, but also for black people as a whole,” she told CNN.

“We may not speak the same language, but the foods we eat, the way we carry ourselves, the way we relate to one another, and our deeply ingrained spirituality reflect a bond that is still there,” Louis added. “There is a sense of inner peace and ease I now have, that wasn’t there before. I can move forward with my life, with intention behind everything I do.”