George Washington University's Thomas LeBlanc addresses backlash for asking a freshman, 'What if the majority of students agreed to shoot all Black people?' 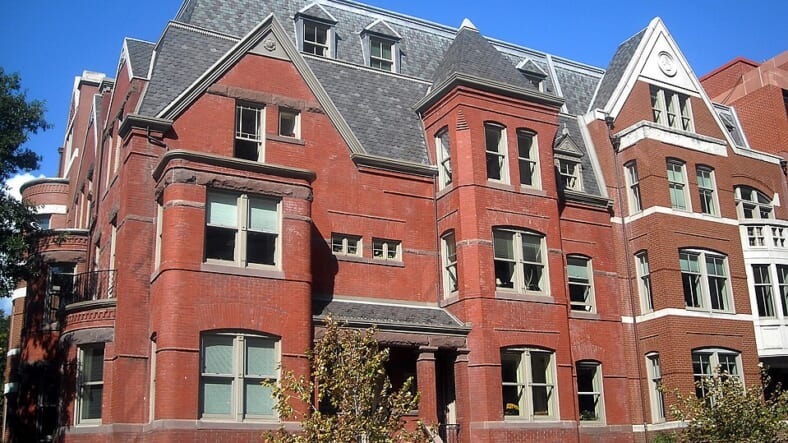 Thomas LeBlanc, president of George Washington University, is apologizing for using an insensitive racial analogy when he tried to explain the school’s right to free thought.

When LeBlanc was approached by a freshman student on a sidewalk, he was asked whether the university would divest its holdings in fossil fuel companies. He gave a very articulate breakdown of what the school is doing to pull from their 3% Carbon investments and went on to explain the difference between buying individual stocks and buying funds. Their investment is connected to the funds that the school as purchased. In this teachable moment, the student seemed to be enlightened, empowered with new information about the process and a feeling that her query was answered.

Her follow-up question was about the funding to the university’s Regulatory Studies Center and if most students agreed would that impact the schools closing of the academic space. In this case, the administrator’s reply was less prepared, organized and even jarring.

After posing different examples of how the school is an environment of free thought— even thoughts that are not popularly shared— the student asked, “But what is the majority of the students don’t agree.”

He responded, “Doesn’t matter. What if the majority of students agreed to shoot all Black people here? Do I say ‘ah, well, the majority voted?'” He continued, “In this country we have rights. One of them is free speech and academic freedom.”

It was unbeknownst to him captured on video.

Overheard outside the Smith Center:LeBlanc comparing students wanting fossil fuel divestment to students wanting to “shoot all black people on campus” on the first day of Black history month (4:43)LeBlanc acknowledging the Regulatory Studies Center is an anti-regulation institution backed by fossil fuel interests despite their claim to be an “objective” and “unbiased” group. (3:04)LeBlanc saying climate change denial is a legitimate academic position and that he would welcome professors at GW who hold that view (3:12).LeBlanc acknowledging 3% of the endowment is invested in the fossil fuel industry, which is almost 60 million dollars. (00:25)

“I attempted to emphasize a point and used an insensitive example that I realize could be hurtful to members of our community,” LeBlanc said in the statement. “The point I was making — that majority rule should never suppress the human rights of others— was obscured by the example I used. I regret my choice of words and any harm I unintentionally inflicted on a community I value greatly.”

The Regulatory Studies Center has been at the center of controversy after Public Citizen, a nonprofit consumer advocacy group, said the center receives funding from billionaire Charles Koch and pushes for government deregulation.

“The analogy was an extremely poor choice of words, given how it exists against the background of real violence against black and brown people in the country,” Quentin McHoes, vice president of GW’s NAACP chapter, told The Washington Post. McHoes said he met with LeBlanc and the president “continued to express remorse for it.”

McHoes said he is hoping to use the incident as a way to work closer with administrators. He said the NAACP chapter would be putting together a list of priorities and collaborating on them with LeBlanc.

“We gain more by working with him as a partner toward these goals than by rallying students for protests and displays of great aggression or frustration with the university that might lead to more tension,” McHoes told the newspaper.

READ MORE: OPINION: It’s the caucacity of nope for the University of Maryland’s new safe space for White students to feel good about race relations

However, student Joe Markus said the issue is “deep-seated.”

“The fish smells from the head,” Markus told The Post. “If the university president is using language like he is using in this video then, clearly, the problem of racial sensitivity and racism on this campus is clearly something that is deep-seated and requires serious self-reflection from the decision-makers of this university.”