Earlier this week, flyers were posted on the campus of the University of Maryland advertising a new support group at the school’s counseling center to help students discuss race relations.

I really need to schedule a face-to-face meeting with the geniuses who came up with “White Awake,” a widely mocked, misguided (and since re-named) attempt to provide a judgement-free, and presumably minority-free, safe zone to have these discussions.

I’m not sure I’d be able to attend without being trussed up Hannibal Lecter-style and encased in Vibranium from Wakanda. Despite the finest of home-training and a blemish-free criminal record, it would be too tempting to put these buffoons into a collective headlock. In fact, this is live footage of me trying to figure out who approved this stunning act I’ll aptly call, “The Caucacity of Nope.” 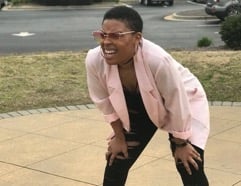 Once I was sure that this White Awake group was really a thing, I asked myself (and the sky) the following questions:

It really isn’t much of a burden to ask White students to engage in uncomfortable discussions around race in America. Exactly how comfy and cozy do they think Black and brown people feel?

What a time to be alive when 45 Savage is in the White House, Botham Jean’s taxpayer-funded killer walks about freely, and Black folks can’t go a full day without getting the police called on them for NOTHING other than being.

It is high time for those who have dominated the census for so long to go beyond their tepid tolerance and learn genuine empathy. Plus, the way this country is set up, that starts with a taste of what it is like to be constantly questioned, analyzed and made to feel like an “other.”

I have personally witnessed the extreme unease of the so-called majority when the tables are turned. Spoiler alert: The hypocrisy was mind-blowing.

During my college years, one of my classmates and very good friend was a White woman from the East Coast. She thought absolutely nothing of dragging me, one of two brown people in our particular academic program, into White people-filled breweries and social gatherings where I was gaped at (or wholly ignored) by khaki pant-wearing, frat bros or pawed by giggling female patrons marveling at “how I did (insert random Black woman style) with my hair.”

Not only did she shrug off my discomfort at these events, but one of the few times I asked her to return the favor and accompany me to a party at a Black nightclub, it was suddenly a trip to “Apocalypse Now.”

As we moved through a mecca of melanin in the D.C. area, she immediately collapsed into herself, clutched her oversized purse, and stuck closer to me than my shadow. Though the music we both enjoyed blared from the speakers in a room full of friendly revelers, she didn’t move a muscle on the dance floor until I guilted her into it. Even then, she engaged in a feeble two-step, further weakened by the fact that she was actively looking around as if we were minutes from a zombie invasion.

When I confronted her about her reaction that night, she admitted that she was nervous about being one of the only “White people in sight.”

I explained to her (back when I used to bother with such things) that I didn’t have the luxury to feel that way. If I did, I’d never set foot on the campus of our college, eat at restaurants near our downtown dorms, or shop on the Magnificent Mile with her on weekends. I won’t say she became a champion of Civil Rights after that conversation, but I was heartened that she experienced even a tiny aspect of the minority experience.

Let’s spread the “otherness” wealth, shall we?

Despite a vampiric interest in our culture, America still wants its citizens to accept Whiteness as #goals. While we Blacks are a mighty fine source for entertainment, viral dance crazes and wholesale appropriation of our style, music, cuisine and slang, when it comes to actually interacting with us on a meaningful level, that’s just a bridge too far for some white folks to travel.

Doesn’t that help explain how the same “red-blooded Americans” can be colorblind in cheering for football teams dominated by Black men, but then quickly turn tail and denounce those same individuals for respectfully asserting their rights as citizens. (Yes, word to Colin Kaepernick. Just do it.)

Sure, you might expect such stupidity at beer-soaked sporting events, but it is deeply disappointing that actual college administrators at the University of Maryland with a student of color population of 43 percent would consider “White Awake” a legitimate way to help non-melanated students somehow “become more culturally competent.”

Twitter had to actually drag the school through Dante’s seven layers of hell and back in order for them to even glimpse the errors of their diversity-lite ways.

The university has since renamed their effort the “Anti-Racism and Ally Building Group, according to NBC-4, which revealed it also scrubbed away references aiming the call-for-participation so squarely at White students.

Unless they outsourced it to facilitators with better sense, this initiative will remain a major fail for all involved. White people talking gently to White people about the privilege of White people amid the company of White people is a large part of the reason the rest of us are still suffering Jim Crow-era indignities in the year of 2018.

An echo chamber by any other name is still the same.

Kyra Kyles is a nationally known multiplatform media executive, author, and speaker on media diversity.  In addition to her 20-plus years as a journalist, including a tenure as Editor-in-Chief of EBONY and a multimedia correspondent/columnist for the Tribune Company, Kyra is the Chicago-based co-founder of content development collective, Myth Lab Entertainment. Follow and feel free to interact with her via @thekylesfiles on Instagram, Facebook, and Twitter. That is, unless you’re some kind of troll or a card-carrying member of #LawrenceHive.