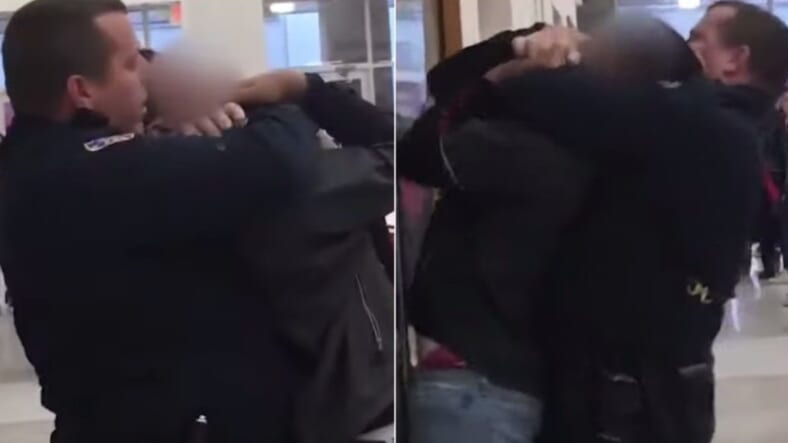 An Arkansas police officer who was seen on video putting a high school freshman in a chokehold has been placed on leave.

Camden Police Chief Boyd M. Woody said officer Jake Perry was put on leave pending an investigation of the Monday morning incident, reported NBC News. Perry, who has been a Camden police officer for over two years, works as a school resource officer at Camden Fairview High School where the incident took place. Camden is located about 100 miles south of Little Rock.

In a statement, Woody wrote: “As the Police Chief, I will not tolerate misconduct from my officers and this matter will be dealt with accordingly and I will be transparent in doing so.”

In the video that is making its rounds on social media, Perry appears to grab Dekyrion Ellis, a ninth-grader, by the neck in a chokehold before pulling him backward, according to KTVE, an NBC affiliate, in El Dorado, Arkansas. Ellis told the station that he was arguing with a friend when Perry stepped in.

“I feared for my life,” Ellis told KTVE. “I didn’t know what was going to happen. I blacked out. I really didn’t see anything until he took me back to the office.”

Ellis questioned why the officer had to restrain him and said the incident left him feeling embarrassed.

“He could’ve taken me to the office,” Ellis said of Perry. “He didn’t have to restrain me. It wasn’t like I was trying to get away from him. I wasn’t resisting arrest.”

Ellis’ family had the teen X-rayed at a local hospital after the incident.

NBC News attempted to get a comment from Perry on Tuesday, but the network did not hear back from the officer.

Woody said the police department is gathering statements from witnesses and looking at video from Perry’s body cam and surveillance video from the school.