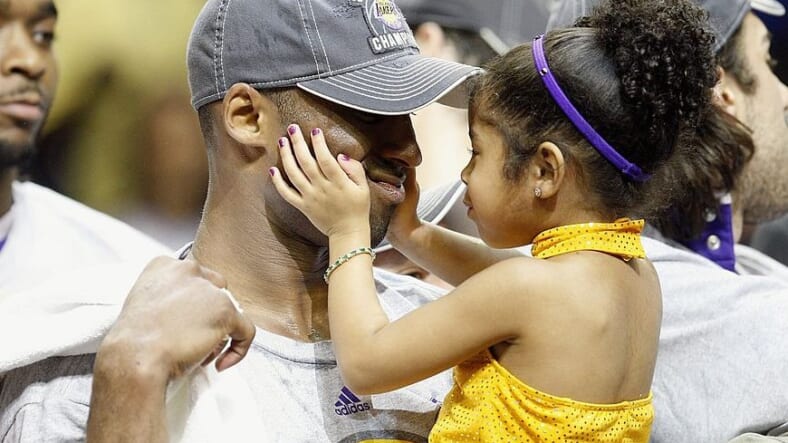 ORLANDO, FL - JUNE 14: Kobe Bryant #24 of the Los Angeles Lakers holds his daughter, Gianna, after the Lakers defeated the Orlando Magic in Game Five of the 2009 NBA Finals on June 14, 2009. (Photo by Ronald Martinez/Getty Images)

Hundreds of well-meaning Kobe Bryant fans are reportedly flocking to the wrong gravesite to pay respects to the fallen NBA legend.

Each day, the owner of the Pacific View Memorial Park removes flowers left for Bryant and his 13-year-old daughter, Gianna, from a private plot because the plot reportedly does not belong to the Bryants’ but rather another family, according to The USA Today. Kobe, Gianna, and seven other people were killed in a helicopter crash on Jan. 26.

“We can confirm that is not Kobe and Gianna’s resting place,” Ashley Bunton from Service Corporation International, which owns the cemetery, told USA Today. “We cannot divulge any additional details as to where they are. But we can tell you that is not the correct location.”

More than 400 people came to the gravesite last weekend. Bunton said the situation has gotten so out of hand that the cemetery is adding security officers to keep people away.

“Just a lot of people coming wandering the cemetery and looking to see if they can locate the burial site,” Bunton said. “They’re just having to monitor things that are going on there.”

During the visits, Bunton said some of Kobe’s fans have actually run into family members of the deceased who are buried at the site. The family has “shooed people away” from the spot because “it’s disturbing the peace to the person interred there,” Bunton added. A security guard told the newspaper that someone was buried at the site last November.

The USA Today reported that a couple, who declined to give their names, came to the cemetery on Tuesday and was told by a security officer that the gravesite did not belong to Kobe and Gianna. They said they noticed that the private plot now had a bush decorated with Christmas ornaments to make people think the burial occurred around the holidays, but the couple says they don’t believe it.

Some of the flowers planted at the site are purple and gold, the Lakers’ colors, which Bunton calls a coincidence.

Bunton said people started coming to the gravesite in masses after the Daily Mail published photographs of the graveside, saying it was where Bryant and Gigi were buried. No engravings appear at the private site.