President Trump is expected to sign it into law, making the abominable evil a federal crime 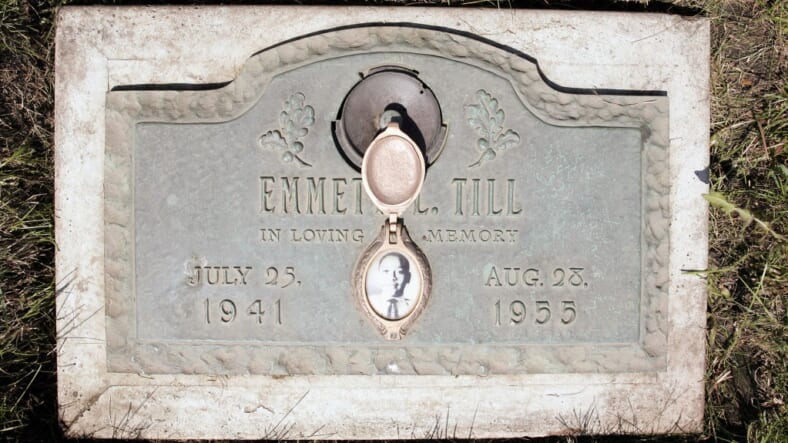 The landmark sign where Emmett Till's brutalized body was discovered is being upgraded to bulletproof materials. (Photo by Scott Olson/Getty Images)

Lynching grew one step closer to becoming a federal crime yesterday after the House passed the Emmett Till Anti-lynching Act. The House bill, introduced by Rep. Bobby Rush (D-Ill.), would add lynching to the United States Criminal Code and make it a hate crime.

Last year, the Senate unanimously passed an anti-lynching bill that was put forth by Sen. Kamala Harris (D-Calif.), Cory Booker (D-N.J.) and Tim Scott (R-S.C.). Now all that remains is for the two bills to be merged into one and sent to President Trump to sign into law, which he is expected to do, The New York Times is reporting.

This moment is historic because, for at least 120 years, the House and Senate have tried to pass an anti-lynching law to make the abominable evil a federal crime. But each time, anti-lynching bills were blocked, put on hold or ignored, until now. Even though the move is considered more of a symbolic gesture in today’s time, it is still needed, legislators said.

“Today brings us one step closer to finally reconciling a dark chapter in our nation’s history,” Booker said in a statement about the approved House bill.

“We are one step closer to finally outlawing this heinous practice and achieving justice for over 4,000 victims of lynching,” Mr. Rush said in a statement when the House vote was announced last week.

Emmett Till was just 14 when white men tortured and killed him in 1955 after a then 21-year-old white woman named Carolyn Bryant said he grabbed her by the waist and whistled at her in a Mississippi grocery store. Many years after Till’s murder, Bryant admitted that she lied in her testimony. Emmett’s mother, Mamie Till Mobley, chose to have an open-casket funeral so photographers could capture it and the whole world could see what they did to her son.

Bryant’s husband, Roy Bryant, and his brother, J.W. Milam, were charged with killing Emmett but were acquitted by an all-white jury, which was typically the outcome in such cases.

But on Wednesday, the House sought to acknowledge the wrong by adding lynching to the United States Criminal Code. And while its timing is late, it is still important to have an anti-lynching law on the books, particularly with a surge in racist acts that the United States has experienced in recent years – from the nine Black parishioners killed in a Charleston, South Carolina church while attending Bible study in 2015 to the brutal killing of James Byrd Jr., a Black man who was tied to a pickup truck and dragged for several miles by three white supremacists in Jasper, Texas in 1998.

“The importance of this bill cannot be overstated,” Mr. Rush said in his statement, according to The New York Times.

READ MORE: WATCH | The evil history of lynching and why President Trump&’s tweet was disrespectful

“From Charlottesville to El Paso, we are still being confronted with the same violent racism and hatred that took the life of Emmett and so many others,” he said, referring to the violent white supremacist rally that occurred in Virginia in 2017 as well as a mass shooting in Texas in 2019 where Latinos were targeted. “The passage of this bill will send a strong and clear message to the nation that we will not tolerate this bigotry.”