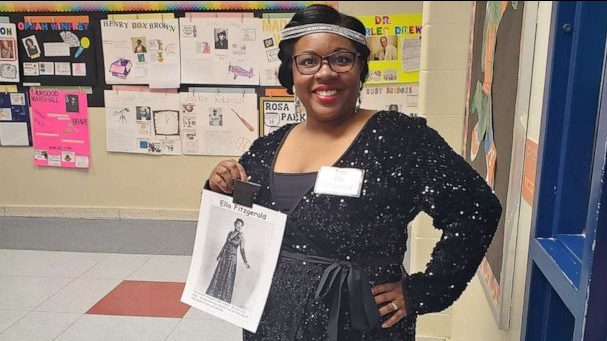 A first-grade teacher in Suffolk, Virginia gave her class a firsthand lesson in Black History Month by personally transforming into Black trailblazers each school day this month.

LaToya McGriff became one of three “human computers” profiled in Hidden Figures and taught her class about the contributions of Black female mathematicians whose work helped men land on the moon. She also brought a tennis racket to school and donned athletic gear when she dressed up as Arthur Ashe, the first Black man to win the U.S. Open.

McGriff said dressing up as local and national groundbreaking Black achievers not only exposed her class to these pioneers but also helped keep her student’s attention. McGriff said they asked questions and loved to guess the historic figure she would dress up as the following day, according to CBS News affiliate WAVY.

One day, McGriff came dressed as Mack Benn, Jr. from Suffolk who would become the first Black superintendent for Suffolk Public Schools. She also showed hometown pride by dressing up as another Suffolk native, Colonel Fred Cherry, who became the first and highest-ranked African-American officer. He was also among the U.S. prisoners of war during the Vietnam War, McGriff told WAVY.

On February 10, she wore a sparkly dress and came in as famous jazz scat singer, Ella Fitzgerald. The next day, she turned into educator Booker T. Washington, and also dressed up as Misty Copeland and Florence Bowser, a teacher from Suffolk who taught in a one-room segregated schoolhouse for Black students.

McGriff said she got the idea years ago from another teacher who did something similar.

“That’s what I remember, having a teacher come dressed as a storybook character. Well, I could dress up as a different figure, an African American figure past or present so they can see themselves represented,” McGriff told WAVY.

She said it was important for her to show the students attending the majority-black school that “people who look like them contribute” in every facet and industry and they can too.