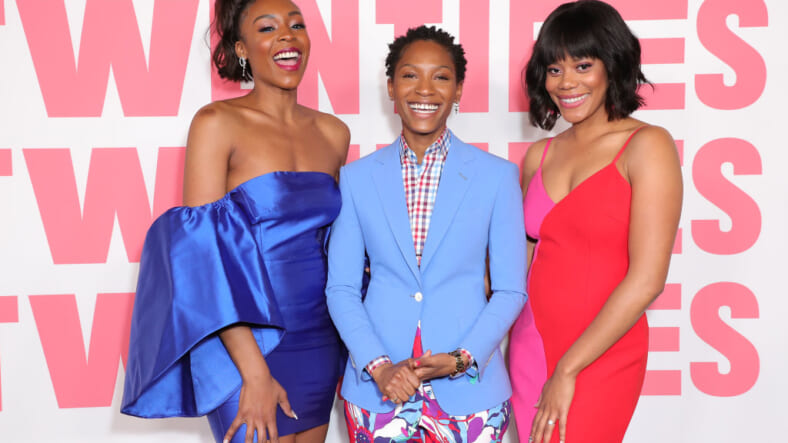 Ever since news broke that Twenties was on the way, we’ve been waiting to see how the groundbreaking concept from Lena Waithe would turn out.

The comedy series executive produced by the Emmy-winner premieres on BET on March 4 and theGrio caught up with the cast to find out what we can expect.

Twenties is BET’s first series to be led by a masculine-presenting lesbian and it’s sure to make huge strides in terms of representation for the LGBTQ community.

The eight-episode series will star Jonica “JoJo” T. Gibbs as Hattie. She’s an aspiring television writer who dreams of glory, but seems incapable of holding down a regular job. Not one to sweat the small stuff — like being evicted — Hattie doesn’t let much faze her, and when in doubt or trouble, she turns to her best friends, Nia and Marie for help. She’s a lesbian who always falls for straight women. Out of cash and desperate for a break, Hattie interviews with Ida B., a successful Black television writer/producer who calls her out on some shady tweets Hattie made some years prior. But when Ida B. offers Hattie a job as a writer’s PA, Hattie may finally have her foot planted firmly on the ladder of Hollywood success.

“This show definitely represents a chapter in my life. I definitely slept on a friend’s couch and definitely been broke,” Gibbs told theGrio. “She just so happens to be queer.”

The show’s lead admitted that there was a lot of pressure considering her role is based on the real-life of the show’s famous creator.

“Playing a character loosely based off of Lena, I thought it would be important for me to make sure that I imitated her as much as possible,” she continued. Graciously, she gave me the free range to make the character my own in a lot of ways.”

Here’s how Lena Waithe made Disney history in ‘Onward’

Her BFF, Marie is played by Christina Elmore. She’s a young feature film executive at Monument Pictures with a seemingly perfect life with her seemingly perfect boyfriend, Chuck. One of Hattie’s best friends, Marie does everything by the book, and although she loves Hattie, she is always lecturing Hattie about her carefree lifestyle. She and Chuck reluctantly take in Hattie while she gets on her feet.

“I think what’s so brilliant about this show is that yes, it is loosely based on her life and it’s definitely her story to tell that she’s been trying to tell for a while but she has a lot of collaboration,” Elmore explained. “She brought in people who really knew their stuff and so it has just been a dream.”

Hattie’s other best friend, Nia (Gabrielle Graham) is described as a  “Trinidadian goddess” and “a lady in every sense of the word” who has been taught by her female relatives in the islands to hold herself in high esteem, especially in her dealings with men. Best friends with Marie and Hattie, Nia is an evolved, serene yet delightfully offbeat yoga instructor who longs to meet her ideal mate and get back to her true passion, acting.

Check out our full interview with the cast of Twenties above.