Reports state that the historical collection will also be stored at the Getty Research Institute. 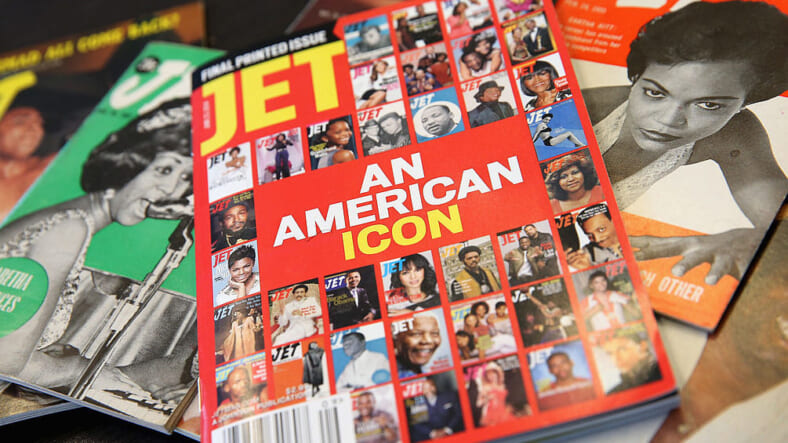 The final print edition of JET magazine with a cover declaring it "An American Icon" was printed in 2014. Now, in 2019, Johnson Publishing Company has filed for bankruptcy. (Photo by Scott Olson/Getty Images)

Last year, more than four million images originally published by the iconic Johnson Publishing Company were auctioned off to a group of buyers in order to settle a bankruptcy debt.

TheGrio previously reported that the group of buyers, including J. Paul Getty Trust, in association with the Ford Foundation, the John D. and Catherine T. MacArthur Foundation and the Andrew W. Mellon Foundation, purchased the historic photos for $30 million.

The archive boasts more than 4 million photographs, recordings, negatives and slides capturing Black life, celebrities, artists and activists in America; featuring everyone from Martin Luther King Jr. and Malcolm X to Maya Angelou and Muhammad Ali and Eartha Kitt. These images will soon be available to the public in the form of digital archives, Colorlines.com reports.

The MacArthur Foundation has announced the formation of an Advisory Council that will “inform the preservation and future use of the historic photographic collection—which includes 3.35 million negatives and slides, 983,000 photographs,166,000 contact sheets, and 9,000 audio and visual recordings illustrating Black life in the 20th century.”

All of which will be made available for public use.

“The iconic archive from ‘Ebony’ and ‘Jet’ magazines tells a story about the African American experience in the 20th century that is far too often overlooked,” said Andrew W. Mellon Foundation president Elizabeth Alexander. “Preserving this collection and making it accessible to all is integral to the vision shared by this consortium.”

The archive is currently housed in Chicago where it will remain until its transfer to the Smithsonian National Museum of African American History and Culture and the Getty Research Institute, the report states.

The MacArthur Foundation will showcase selected images at an event in Chicago this summer, prior to the wide distribution, NBC News reports.

READ MORE: A Sad Day: Ebony to auction off its prized photo archives to pay creditors

“This collection presents an extraordinary visual experience that will provide scholars, researchers, journalists, and the wider public an unparalleled opportunity to explore the nuances and intricacies of 20th century African American culture,” said Spencer Crew, interim director of the African American History Museum.

“We are eager to make the archive accessible for widespread use for generations to come.”