The Grammy-winning singer wore what she called a “Bootleg Hazmat,” an element of her own “social distancing couture," in Austin to accept an award. 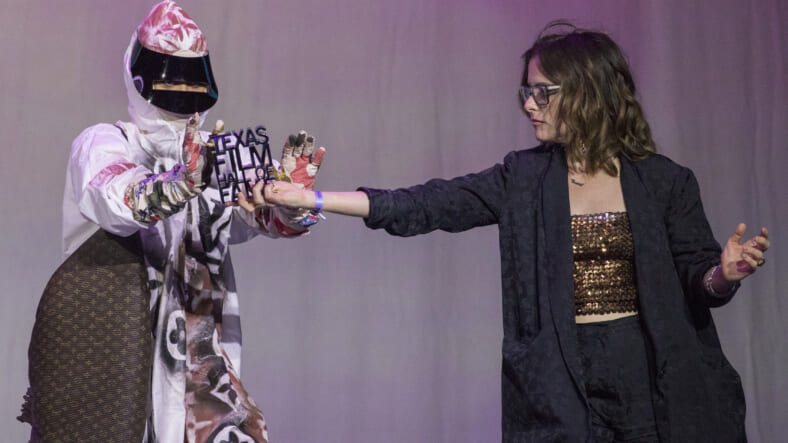 The Grammy-winning singer wore what she called a “Bootleg Hazmat,” an element of her own “social distancing couture.” The suit was branded with Louis Vuitton logos, spray-painted in black and red.

The bootleg hazmat was accented with a mask, gloves, visor, feathers booties, and a beat face.

Badu was on hand to accept the Filmmakers/Soundtrack award celebrating “her many roles in film, writing, directing and editing in all her own videos for the past 22 years,” ETCanada reports.

With the coronavirus, COVID-19 officially named a pandemic by the World Health Organization, additional celebrities have been spotted in hazmat suits as they continue their work.

America’s Got Talent panelist Howie Mandel wore a suit as he arrived for filming in California. Dressed in a white suit, Mandel also wore a gas mask and orange rubber gloves. According to TMZ, Mandel’s AGT’s co-worker Heidi Klum went home from filming on Tuesday due to an illness, however, it is not suspected to be coronavirus.

Iconic model Naomi Campbell also was spotted in a hazmat suit as she traveled from LA to NYC, wearing an N95 face mask and a pair of pink latex gloves. Page Six also notes a camel cape that she wears on top of the suit.

Campbell is no stranger to health precautions while traveling. In 2019, she shared a video that shows her using antibacterial wipes to sanitize everything within arms reach of her during a flight.

News of Campbell also wearing a suit made it to Mandel, who shared a picture of both stars while asking “Who wore it better?”

Who wore it better?