The supermodel donned a simple towel as she accompanied her hubby, hoping their show would lift the nation's spirit 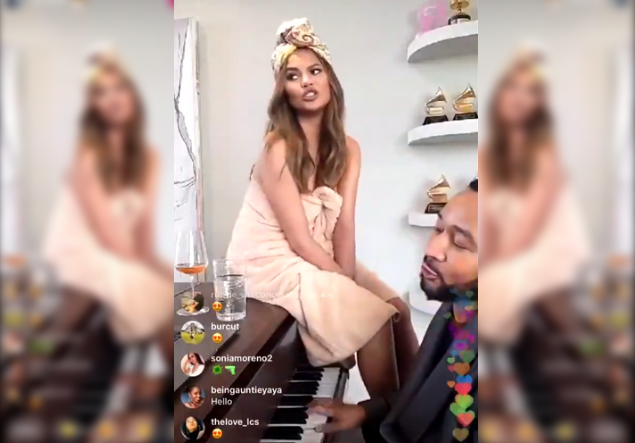 John Legend hosted a free Instagram Live concert from the comfort of his home in an effort to keep spirits high amid the coronavirus pandemic, but it was his wife who stole the show.

Chrissy Teigen rocked a simple bath towel for her husband’s gig after fans voted for the informal attire in a poll asking what she should wear for the event.

Teigen tweeted four different wardrobe options that her followers had to choose between: a bath towel, a pink mini dress, a long-sleeve orange outfit, a sequin gown, PEOPLE reports.

Twitter voted for the “simple house towel,” which Teigen proudly rocked during Legend’s live-stream. She accessorized with a colorful turban and a glass of wine.

Another added, “They have become the most annoying couple ever.”

A third critic annoyed by the show wrote, “Between the two of them, they have zero redeeming qualities.”

One supporter expressed her envy of the model and her superstar hubby, writing: “oh to be chrissy teigen only wearing towel but still look absolutely gorgeous while sitting on top of a piano her husband john legend playing while drinking a glass of wine.”

During his lively set, Legend announced that he will drop new music this year and previewed a new song, titled “Actions Speak Louder Than Love Songs.”

“Just so you guys know, I am putting out a new album this year,” Legend said. “Everybody’s home, you need stuff, you need music, you need TV, you need films. You need stuff to entertain you, so I’m going to put some music out.”

The GRAMMY award-winning singer also noted that he and his team are in the “process of mixing a lot of the stuff on the record,” and that he has written and recorded most of it.

According to Entertainment Tonight, Legend and entertainers like Chris Martin are practicing social distancing amid the coronavirus pandemic, by performing at-home live concerts and streaming the performances to fans via social, TheGrio previously reported.

ET noted that “the Together at Home series of concerts was launched to encourage social distancing and support of the World Health Organization (WHO) in its efforts against the spread of COVID-19.”