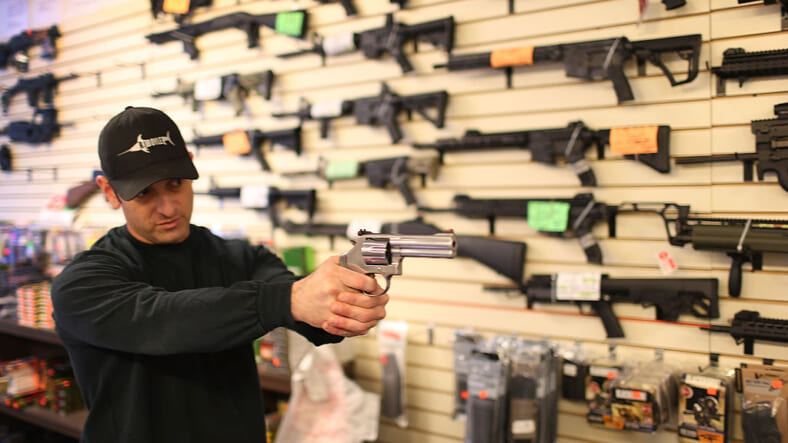 DELRAY BEACH, FL – JANUARY 05: Brandon Wexler shows a customer one of the weapons that she was picking up at the end of the three day waiting period at the Gunworks store on the day that U.S. President Barack Obama in Washington, DC announced his executive action on guns. (Photo by Joe Raedle/Getty Images)

The coronavirus is not just causing a shortage of toilet tissue, cleaning supplies and bread, it is prompting an increase in gun and ammunition sales from people fearful of the disease’s potential aftermath.

People like Daniel Hill, who had never purchased a gun prior to the coronavirus pandemic. Last week, Hill picked up two guns, a 9-millimeter Taurus handgun, and an AR-15 semiautomatic rifle, from Hyatt Gun and Coin, a gun store in North Carolina, according to The New York Times.

READ MORE: Italians warn US about coronavirus in video: ‘Huge mess is about to happen’

Hill, 29, who works as a kitchen manager in Charlotte, N.C., told The Times that the unknown aftermath of the coronavirus caused him to fear a potential lapse in public safety —complete with lootings, robberies and “everything shutting down, like in a zombie movie.” Hill said he feared an America that “just won’t have any sense of lawfulness anymore.”

Gun and ammunition dealers say Hill is not alone. Gun stores are reportedly seeing a sharp increase in customers who share Hill’s fears. Some states have sold out of particular models of firearms and other survival prep gear, including in California, New York, Ohio, Washington State, and Alabama. One Twitter photo showed a long line of people outside of a Los Angeles gun shop, waiting to purchase their firearms.

If you thought the lines at the grocery store are long… good morning from Los Angeles ? pic.twitter.com/NudGqwW4I2

Also like Hill, many of these purchases are from first-time gun buyers.

“We attribute it mainly to the virus scare,” Larry Hyatt, owner of Hyatt Gun and Coin, told The New York Times. He estimates that his store has increased sales by 30 to 40 percent since late February. Hyatt said his store has been selling 300 guns a week since the coronavirus pandemic, but he also attributes the increase to the presidential election and stock market instability.

“People have a little lack of confidence that if something big and bad happens, that 911 might not work. We saw it with Katrina,” Hyatt added. “People haven’t forgotten that a disaster happened, and the government didn’t come.”

The F.B.I.’s numbers for March will not be available for several weeks.

Like gun shops, ammunition suppliers are also seeing a sizable increase in sales.

Alex Horsman, the marketing manager at Ammo.com, told The New York Times that in the five years he has worked for the company, he saw the biggest increase in ammo orders placed over the past few weeks.