Historic $2 trillion rescue bill to include direct payments to Americans

The unprecedented emergency bill to rush sweeping aid to businesses, workers and a health care system slammed by the coronavirus pandemic.

ANDREW TAYLOR, LISA MASCARO and JONATHAN LEMIRE, Associated Press
A man walks through the U.S. Capitol Rotunda, empty of tourists as only essential staff and journalists are allowed to work during the coronavirus pandemic March 24, 2020 in Washington, DC. After days of tense negotiations — and Democrats twice blocking the nearly $2 trillion package — the Senate and Treasury Department appear to have reached important compromises on legislation to shore up the economy during the COVID-19 pandemic. (Photo by Chip Somodevilla/Getty Images)

WASHINGTON (AP) — The White House and Senate leaders of both parties announced an agreement early Wednesday on an unprecedented $2 trillion emergency bill to rush sweeping aid to businesses, workers and a health care system slammed by the coronavirus pandemic.

The urgently needed measure is the largest economic rescue bill in history. It is intended as a weekslong or monthslong patch for an economy spiraling into recession — or worse — and a nation facing a potentially ghastly toll. 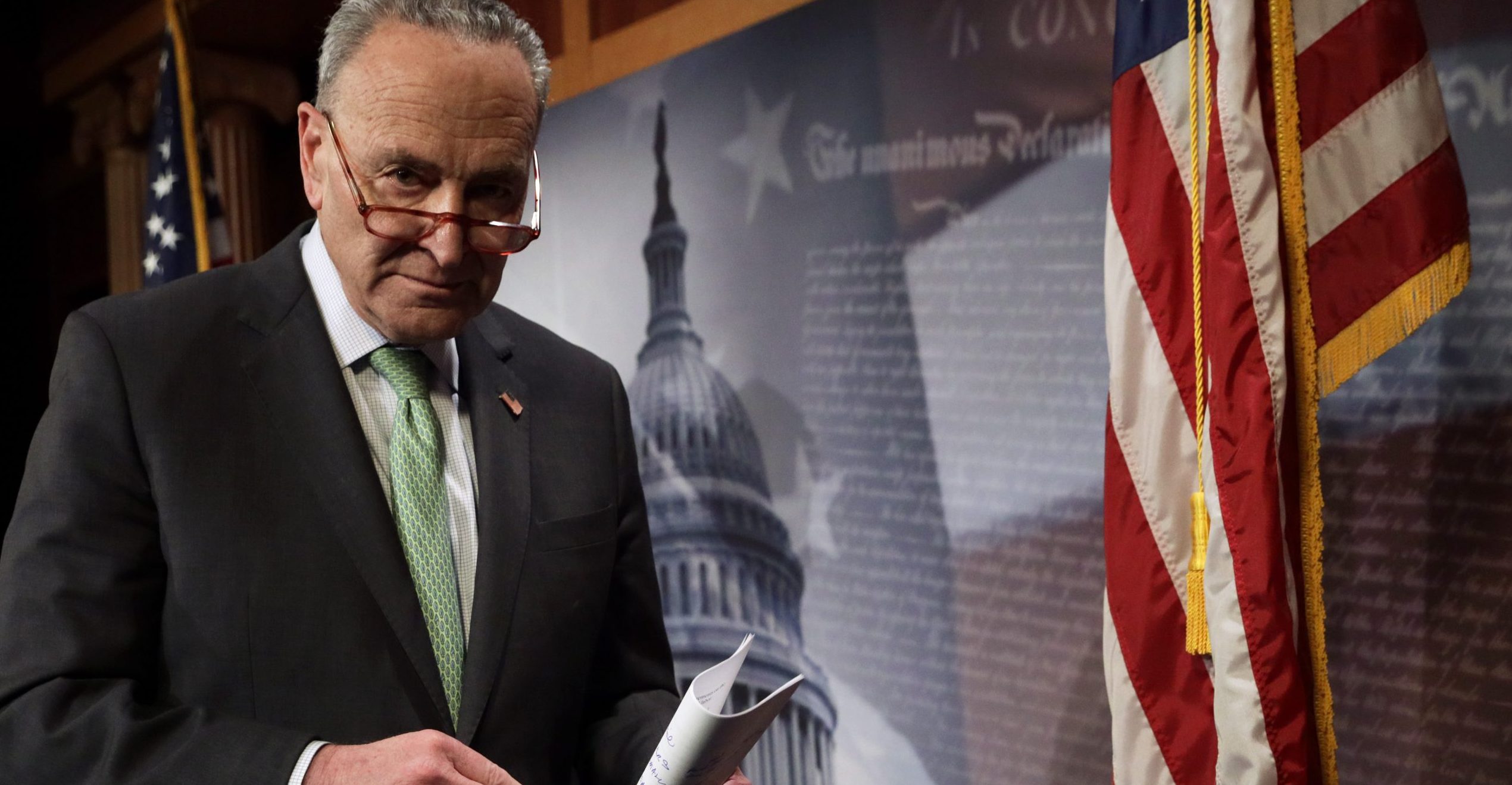 Schumer said he expected approval by the Republican-led Senate later in the day.

That would leave final congressional approval up to the Democratic-controlled House. In a written statement, Speaker Nancy Pelosi, D-Calif., said the bipartisan agreement “takes us a long way down the road in meeting the needs of the American people” but she stopped short of fully endorsing it.

“House Democrats will now review the final provisions and legislative text of the agreement to determine a course of action,” she said.

House members are scattered around the country and the timetable for votes in that chamber are unclear. 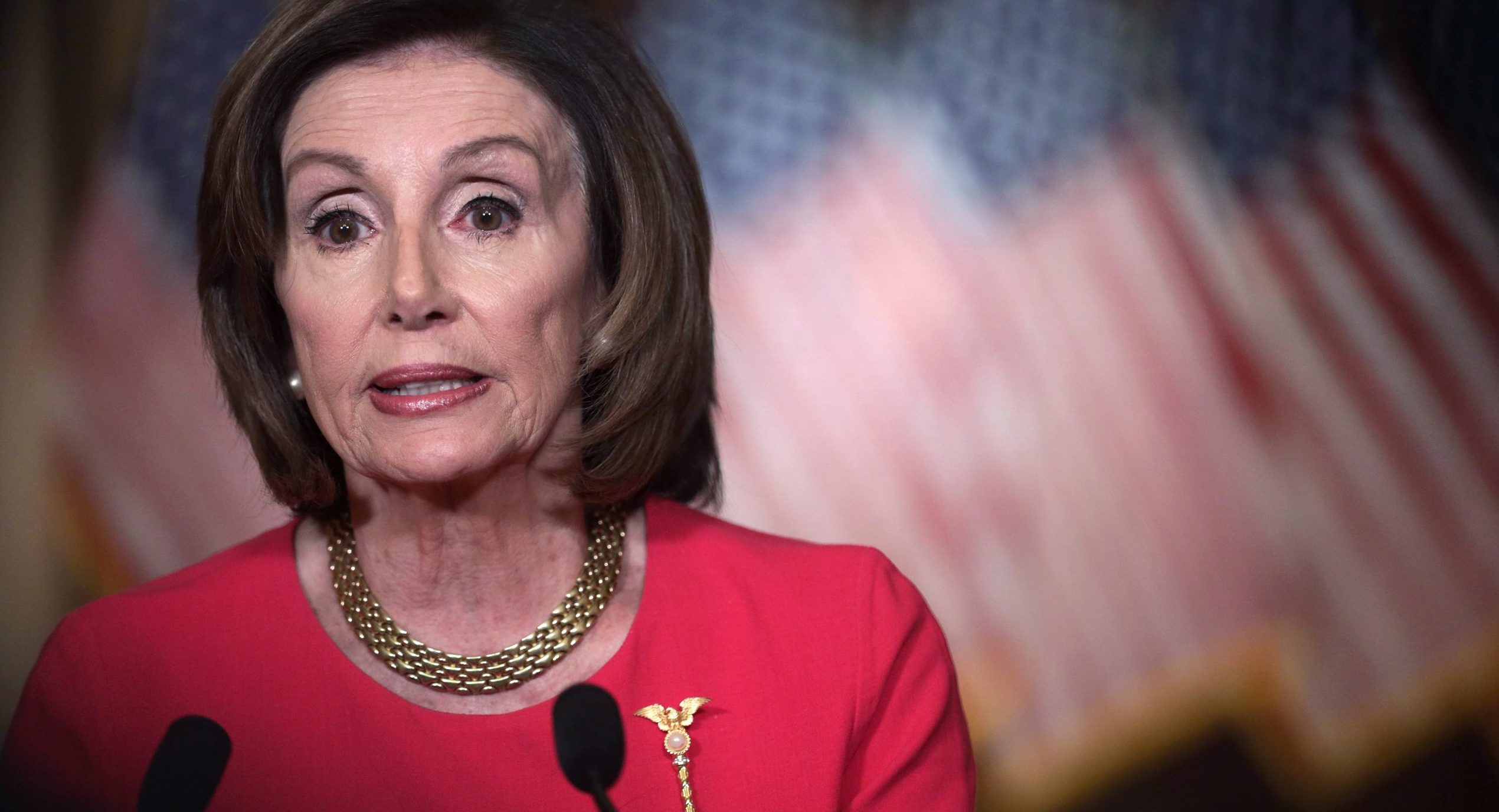 U.S. Speaker of the House Rep. Nancy Pelosi (D-CA) delivers a statement at the hallway of the Speaker’s Balcony at the U.S. Capitol March 23, 2020 in Washington, DC. Speaker Pelosi spoke on the 10th anniversary of the Affordable Care Act and introduced the Take Responsibility for Workers and Families Act in response to the outbreak of COVID-19 pandemic, also known as coronavirus. (Photo by Alex Wong/Getty Images)

House Democratic and Republican leaders have hoped to clear the measure for President Donald Trump‘s signature by a voice vote without having to call lawmakers back to Washington. But that may prove challenging, as the bill is sure to be opposed by some conservatives upset at its cost and scope. Ardent liberals were restless as well.

The economic rescue package would give direct payments to most Americans, expand unemployment benefits and provide a $367 billion program for small businesses to keep making payroll while workers are forced to stay home.

One of the last issues to close concerned $500 billion for guaranteed, subsidized loans to larger industries, including a fight over how generous to be with the airlines. Hospitals would get significant help as well.

“After days of intense discussions, the Senate has reached a bipartisan agreement on a historic relief package for this pandemic,” said Majority Leader Mitch McConnell, R-Ky., a key negotiator. “It will rush new resources onto the front lines of our nation’s health care fight. And it will inject trillions of dollars of cash into the economy as fast as possible to help Americans workers, families, small businesses and industries make it through this disruption and emerge on the other side ready to soar.”

Five days of arduous talks produced the bill, creating tensions among Congress’ top leaders, who each took care to tend to party politics as they maneuvered and battled over crafting the legislation. But failure was never an option, which permitted both sides to mark big wins.

Even before the deal was reached, news of the likely but elusive agreement had sent the stock market rocketing on Tuesday. The rescue package would be larger than the 2008 bank bailout and 2009 recovery act combined.

A huge cash infusion for hospitals expecting a flood of COVID-19 patients grew during the talks at Schumer’s insistence. Republicans pressed for tens of billions of dollars for additional relief to be delivered through the Federal Emergency Management Agency, the lead federal disaster agency.

Democrats said the package would help replace the salaries of furloughed workers for four months, rather than the three months first proposed. Furloughed workers would get whatever amount a state usually provides for unemployment, plus a $600 per week add-on, with gig workers like Uber drivers covered for the first time.

Schumer said businesses controlled by members of Congress and top administration officials — including Trump and his immediate family members — would be ineligible for assistance from receiving loans or investments from new Treasury programs. The New York Democrat immediately sent out a roster of negotiating wins for transit systems, hospital, and cash-hungry state governments that were cemented after Democrats blocked the measure in votes held Sunday and Monday to maneuver for such gains.

Republicans won inclusion of an “employee retention” tax credit that’s estimated to provide $50 billion to companies that retain employees on payroll and cover 50% of workers’ paychecks. Companies would also be able to defer payment of the 6.2% Social Security payroll tax.

Democrats pointed to gains for hospitals, additional oversight of the huge industry stabilization fund and money for cash-strapped states. A companion appropriations package ballooned as well, growing from a $46 billion White House proposal to more than $300 billion, which dwarfs earlier disasters — including Hurricane Katrina and Superstorm Sandy combined.

To provide transparency, the package is expected to create a new inspector general and oversight board for the corporate dollars, much as was done during the 2008 Troubled Asset Relief Program bank rescue, officials said.

At the White House on Tuesday, even as the public health crisis deepened, President Donald Trump expressed eagerness to nudge many people back to work in the coming weeks and held out a prospect, based more on hope than science, that the country could be returning to normal in less than a month. 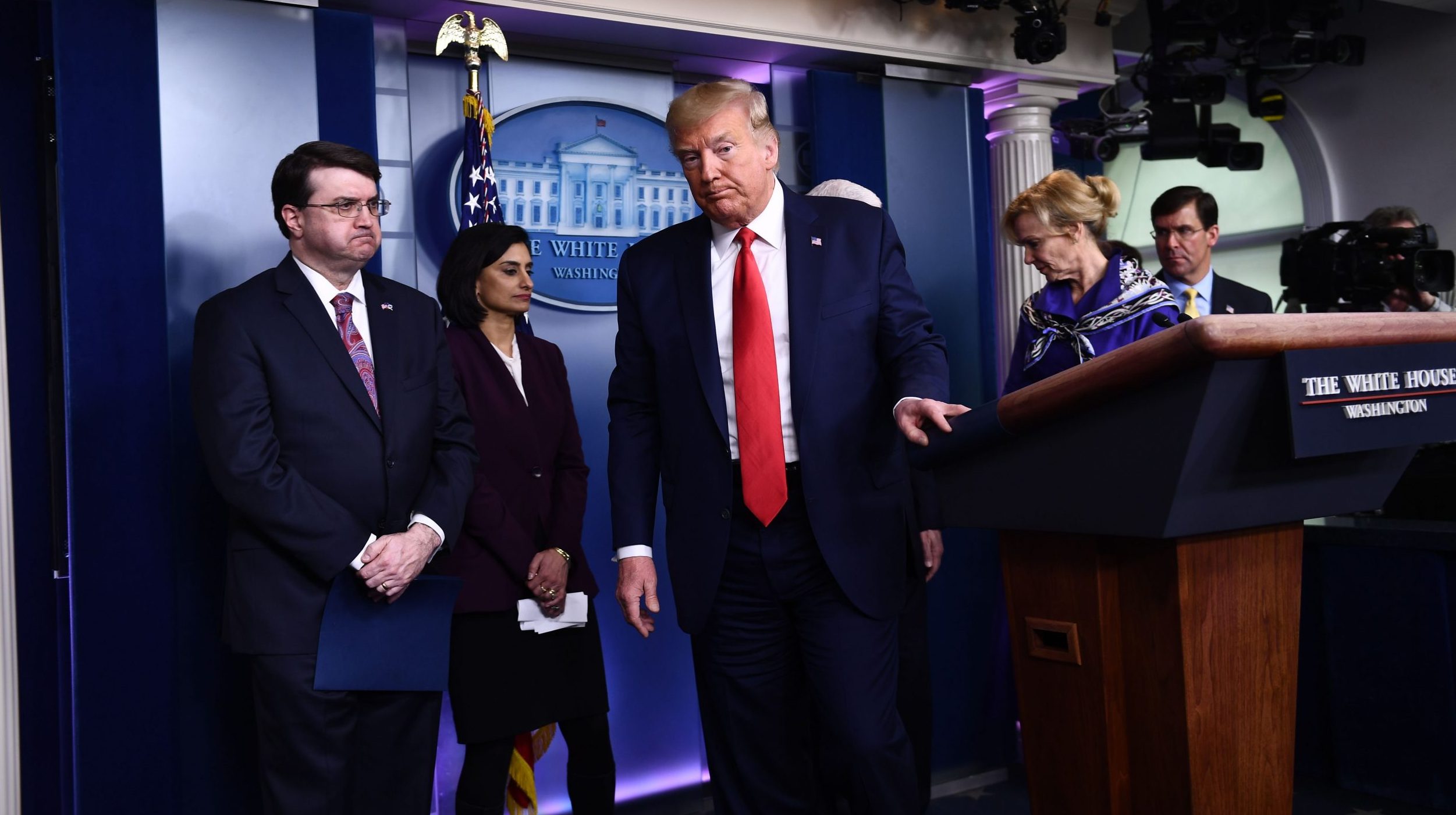 US President Donald Trump leaves after the daily briefing on the novel coronavirus, COVID-19, at the White House on March 18, 2020, in Washington, DC. – Trump ordered the suspension of evictions and mortgage foreclosures for six weeks as part of the government effort to ease the economic pain from the coronavirus pandemic. (Photo by Brendan Smialowski / AFP) (Photo by BRENDAN SMIALOWSKI/AFP via Getty Images)

“We have to go back to work, much sooner than people thought,” Trump told a Fox News town hall. He said he’d like to have the country “opened up and just raring to go” by Easter, April 12. But in a White House briefing later, Trump said that “our decision will be based on hard facts and data.”

Medical professionals say social distancing needs to be stepped up, not relaxed, to slow the spread of infections. At the White House briefing, the public health authorities said it was particularly important for people in the hard-hit New York City metropolitan area to quarantine themselves for 14 days and for those who have recently left the city to do the same.

Dr. Anthony Fauci, the government’s top infectious disease expert, said pointedly at the briefing, “No one is going to want to tone down anything when you see what is going on in a place like New York City.”

For most people, the new coronavirus causes mild or moderate symptoms, such as fever and cough that clear up in two to three weeks. For some, especially older adults and people with existing health problems, it can cause more severe illness, including pneumonia and death. The vast majority of people recover.

The virus has caused a global pandemic that has sickened more than 425,000 people and killed about 19,000 worldwide. In the United States, more than 55,000 people have been sickened and more than 800 have died.