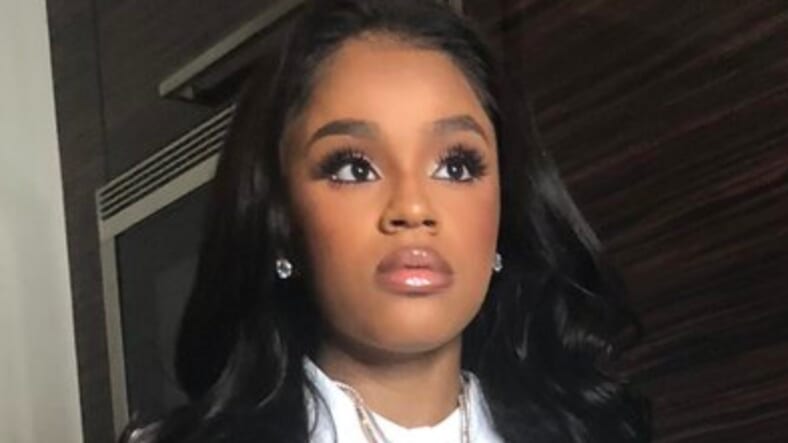 Floyd Mayweather’s daughter Iyanna has been arrested for felony aggravated assault with a deadly weapon.

TMZ reported that Iyanna, 19, stabbed another woman, Lapattra Lashai Jacobs, in a confrontation over her boyfriend NBA Youngboy, 20. She was arrested Saturday morning at around 1:30 a.m. and is being held in Houston’s Harris County jail awaiting bail.

Law enforcement sources told the site that Iyanna, whose nickname is Yaya, was upset when she arrived at the rapper’s home and found him there with the alleged victim who is the mother of his child. She told Jacobs that she was Youngboy’s fiancée and ordered Jacobs to leave who refused.

The two women began arguing and ended up in the kitchen and Iyanna got in possession of two knives. According to the sources, Iyanna charged at Jacobs with one of the knives. Jacobs told police that she didn’t feel the first stab wound but Iyanna stabbed her once more with the second knife.

Jacobs was on the floor when EMT’s arrived and was transported to the hospital. There is no word yet on her condition.

Youngboy was seen being placed in handcuffs but that was most likely a precautionary measure and Iyanna told officials that she was taunted into the fight. She claimed Jacobs pulled her hair outside before running into the kitchen and the knife was a self-defense measure.

The two women had never met before the incident which is another upheaval for Iyanna’s family. In the past month, her father Floyd has suffered the loss of his uncle Roger and former girlfriend, Josie Harris. Roger had been sick for some time while the nature of Harris’ passing is still under investigation after she was found deceased in her car.

Floyd has yet to publicly comment on his daughter’s arrest.