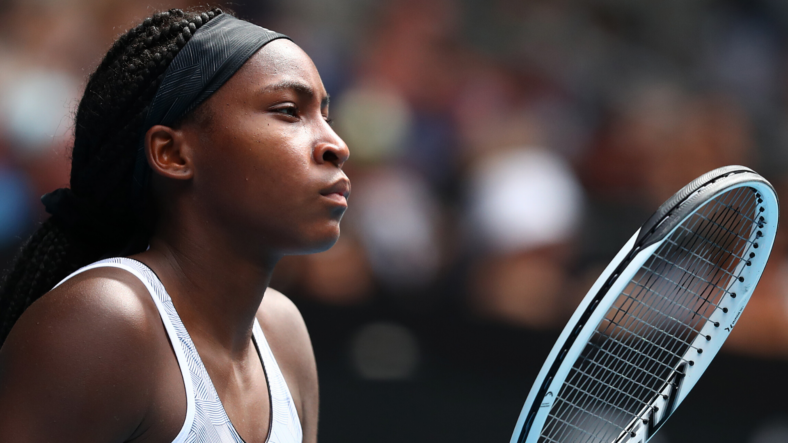 Tennis phenom Coco Gauff rose to tennis stardom in 2019 with impressive showings at Wimbledon and the US Open when she was just 15.

But the road to get there was fraught with depression just a year prior, Gauff, who is now 16, shared in a post on Behind The Racket.

“I’ve always wondered how better or worse my life would be without tennis. With what this sport has given me I cannot imagine my life would be better without. At times I found myself too busy comparing myself to others. Most of my friends go to a normal high school. I felt like they always seemed so happy being ‘normal,’” Gauff began in her post.

She explained that her parents tried to give her as “normal” a childhood as they could and she was able to attend homecoming last year and had plans to attend the prom this year before the novel coronavirus pandemic struck. Still, she missed the camaraderie of her friends and conceded that it’s tough to do school work alone.

On top of this, Gauff says she was often the youngest to achieve certain things, which put pressure on her to succeed.

Coco Gauff of the U.S. makes a backhand return to Japan’s Naomi Osaka during their third round singles match at the Australian Open tennis championship in Melbourne, Australia, Friday, Jan. 24, 2020. (AP Photo/Lee Jin-man)

“Throughout my life, I was always the youngest to do things, which added hype that I didn’t want,” Gauff wrote on the Behind The Racket post. “It added this pressure that I needed to do well fast. Once I let that all go, that when I started to have the results I wanted.

“Right before Wimbledon, going back to around 2017/18, I was struggling to figure out if this was really what I wanted. I always had the results so that wasn’t the issue, I just found myself not enjoying what I loved. I realized I needed to start playing for myself and not other people. For about a year I was really depressed,” Gauff continued.

Gauff said she actually considered leaving the sport. She recalled one day feeling like she no longer wanted to practice.

“Choosing not to (step away) obviously was the right choice but I was close to not going in that direction. I was just lost,” Gauff wrote in the post. “I was confused and overthinking if this was what I wanted or what others did. It took many moments sitting, thinking and crying. I came out of it stronger and knowing myself better than ever.”

It’s a good thing she stuck in there. Last summer, Gauff beat Venus Williams during the opening round at Wimbledon, and she won again against Williams at this year’s Australian Open, where she made it to the fourth round.

She has reverence for the Williams sisters and despite her success, she doesn’t feel she is “at their level yet.”

“I always feel like it’s not fair to the Williams sisters to be compared to someone who is just coming up,” Gauff wrote in the post. “It just doesn’t feel right yet, I still look at them as my idols. With all their accolades I shouldn’t be put in the same group yet. Of course, I hope to get to where they are but they are the two women that set the pathway for myself, which is why I can never be them.”

And she’s grateful she made it through that tough year, and thanked her family and friends for their support.

“Everyone asks me how I stay calm on court and I think it’s because I accepted who I am after overcoming low points in my life,” Gauff wrote. “Now, when I’m on court, I am just really thankful to be out there.”