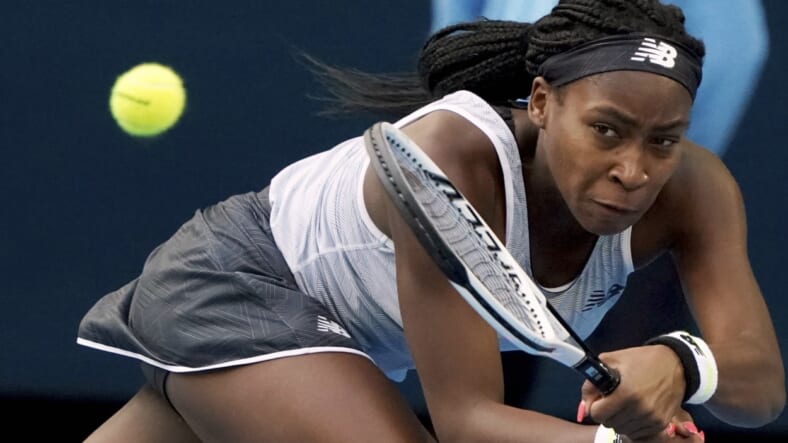 Coco Gauff of the U.S. makes a backhand return to Japan’s Naomi Osaka during their third round singles match at the Australian Open tennis championship in Melbourne, Australia, Friday, Jan. 24, 2020. (AP Photo/Lee Jin-man)

Gauff, who was ranked 67th before pulling off a remarkable feat in eliminating No. 1 ranked Osaka. Osaka made 30 unforced errors and Gauff made 17, according to ESPN.

“Her serve is way better,” Osaka said Friday. “I feel like I wasn’t really swinging freely, and she was.”

This was an impressive turnaround for Gauff after losing two sets to Osaka the first time the two played one another at the U.S. Open in September. At that match, it was Osaka who consoled a sobbing Gauff and encouraged her to address the crowd.

Gauff was poised throughout the match, but then became downright giddy afterwards, joking that she wanted to take “a selfie for Instagram” with Rod Laver, the 11-time major champion. She sounded like the typical teenager addressing the crowd.

“Honestly, like, what is my life? Like, oh, my gosh!” Gauff told the crowd. “Two years ago, I lost first round in juniors and now I’m here. This is crazy.”

Meanwhile at the Australian Open, Serena Williams, 38, surprised many as well, although not for as happy a reason as Gauff. Williams’ loss to 27th seed, Wang Quang of China, marking her earliest defeat at Australia’s Melbourne Park in 14 years, according to CBS News.

“I’m way too old to play like this at this stage of my career,” Williams said to reporters afterward, according to CBS News. “Definitely going to be training tomorrow, that’s first and foremost – to make sure I don’t do this again.”

Wang credited spending more time in the gym with adding more power to her delivery and shots.

“I always believed I could do this one day,” Wang said, according to CBS News. “I didn’t know which day.”