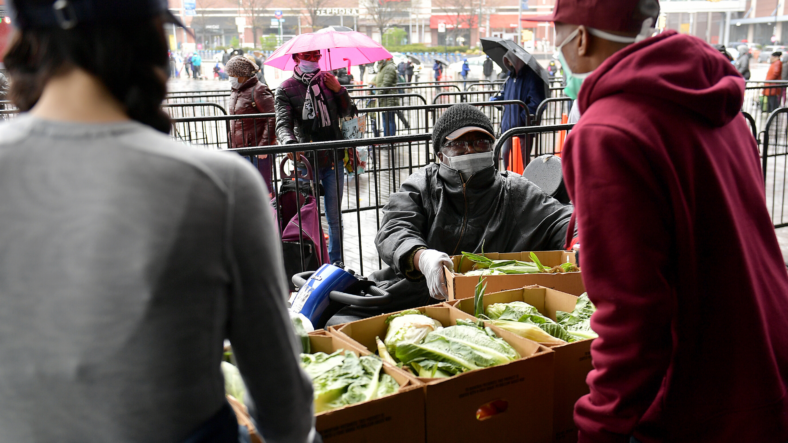 The tepid response by the Trump administration and President Donald Trump, himself remains under intense scrutiny as another blow devastates Americans.

This time, it’s farmers who are suffering.

The Agriculture Department, under the leadership of Sonny Perdue, has finally moved to buy up surplus fruits and vegetables on farms across the country.

In a scathing report from Politico on Sunday, community groups, state leaders, and lawmakers have repeatedly pleaded with the Agriculture Department to take action. For over a month, many Americans have given the department suggestions on how to address this dilemma.

SUNRISE, FLORIDA – APRIL 06: A City of Sunrise employee sorts food, provided by the food bank Feeding South Florida, into bags to be distributed to people arriving in their vehicles. (Photo by Joe Raedle/Getty Images)

They’ve suggested buying surplus food and also ways to help farmers get produce to Americans in need. The department finally unveiled The Coronavirus Food Assistance Program on April 17, more than two months after the crisis began.

$3 billion will be set aside to buy excess food, but federal officials predict that it will take nearly a month before that food is packed and shipped.

The program will purchase dairy, meat, and produce to help get the food to people in need.

There remain many critics of the program including Nikki Fried, the Commissioner of Agriculture in Florida, who reached out to the administration a month ago. Fried had hoped to help prevent waste but got no response.

The closure of food service establishments including restaurants, hotels, schools, and universities has left more than $1 billion in perishable goods rotting in fields with no destination. Federal government distribution of the goods months ago would have benefited farmers as well as millions of Americans who are now struggling with food insecurity.

Eric Geller, a reporter at Politico called the waste of food another “grotesque, massive failure,” of the Trump administration.

US food banks are struggling to meet the demand of Americans hit hard by layoffs caused by the pandemic. Food banks are going over budget and will not receive the pre-COVID levels of public support due to job insecurity.

Food banks, which have instituted drive-thru distribution, have been seeing a skyrocketing demand including lines up to six miles long in hard-hit cities like Philadelphia, Detroit, and Cleveland.

One unique program, Feeding Florida, is paying local farmers to continue harvesting crops and turning them into soups, sauces, and ready meals prepared by restaurant owners who are also out of work.