Feeding South Florida has enough food to feed the demand, but not enough workers to get the food to the people 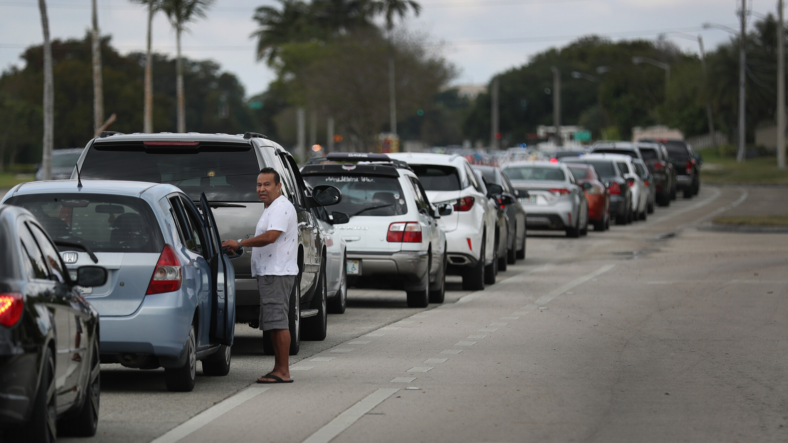 SUNRISE, FLORIDA – APRIL 06: Jose Martinez waits in line next to his car to receive groceries provided by the food bank Feeding South Florida and distributed by the City of Sunrise. (Photo by Joe Raedle/Getty Images)

South Florida residents were backed up for hours waiting to get food from a food bank.

On Monday, a drone captured aerial images of the long line of cars in Sunrise, Florida, where motorists hoped to receive food from Feeding South Florida, a local food bank. Since the novel coronavirus outbreak has left millions of people across the country unemployed, Feeding South Florida has seen a 600 percent increase in Floridians asking for an assortment of food, ranging from milk, eggs, bread, chicken, fruit and veggies, according to Daily Mail.

SUNRISE, FLORIDA – APRIL 06: An aerial view from a drone shows vehicles lineup to receive food provided by the food bank Feeding South Florida and being given away by the City of Sunrise. (Photo by Joe Raedle/Getty Images)

The food bank has enough food to meet demand. The Miami Herald said the coronavirus has forced farmers, who normally sell their crops to restaurants, airlines and other businesses in hospitality, to have an excess of fresh produce and that food banks like Feeding South Florida are getting loads of it.

SUNRISE, FLORIDA – APRIL 06: A City of Sunrise employee sorts food, provided by the food bank Feeding South Florida, into bags to be distributed to people arriving in their vehicles. (Photo by Joe Raedle/Getty Images)

Sari Vatske, executive vice president of Feeding South Florida, said she has watched the need increase six-fold while her staff has been cut by three-fourths due to stay at home orders.

“The math is not on our side,” she told the Daily Mail.

Food that doesn’t end up at food banks is often turned into mulch or simply thrown away.

“The volume is at a level we’ve never seen before,” Stephen Shelley, president, and CEO of Farm Share, told Daily Mail. “It is overwhelming the system.”

Farm Share is one vehicle by which this excess food is delivered daily to food pantries, churches, schools, and other nonprofits. Each of its 25 refrigerated trucks and six warehouses are filled to the brim with the excess food and delivers 2.5 million meals a week to Florida residents, the newspaper reported.

READ MORE: Migos search for food during self-quarantine ‘it didn’t go as planned’

Since the middle of March, more than 520,000 Florida residents have applied for unemployment. This compares to 326,000 for the entire year last year.

There are 16,826 confirmed coronavirus cases in Florida as of Friday morning, according to Floridahealthcovid19.gov, and 371 reported deaths.