Thousands of Californians flock to beaches amid coronavirus 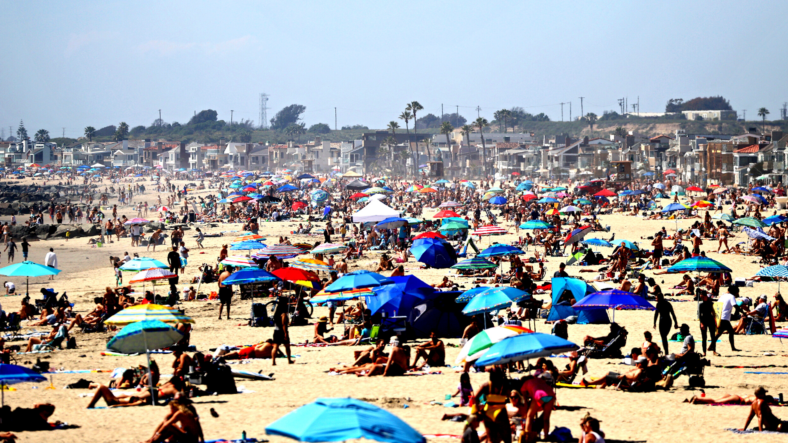 NEWPORT BEACH, CALIFORNIA - APRIL 25: People are seen gathering on the beach north of Newport Beach Pier on April 25, 2020 in Newport Beach, California. Southern California is expecting summer like weather this weekend as social distancing and beach closures in neighboring counties continue due to the coronavirus (COVID-19). (Photo by Michael Heiman/Getty Images)

The Golden State’s head politician quipped the remark in chastisement during a daily briefing, where he reprimanded citizens for gathering en masse at several beaches across Southern California.

Over the weekend, photos emerged of tens of thousands carelessly frolicking about in the sparklingly beige sands of Newport Beach, Orange County, as if the world is not in the middle of a global pandemic— spread mostly by people interfacing in public.

The weekend brought scorching temperatures that almost hit the 90s, and people could not resist resuming the age-old West Coast tradition of going to the shore to cool off. By doing so, beachgoers disregarded the state’s COVID-19 prevention strategy, possibly setting the state back weeks from recovery.

Over the last month, the governor has issued several executive orders to stop the spreading of the novel coronavirus.

According to The National Law Review, during the announcement of his  California Executive Order N-25-20, he was positive that Californians would abide by the provisions set in place for their own health, and did not anticipate additional actions would be needed to enforce his mandate, since so many have been “complying well with public health directives.” He stated that while he was within his power institute martial law to protect people from themselves, he didn’t believe he needed to. For those out with their friends or families looking for things to do in Long Beach, this weekend’s beach shenanigans in the OC might have him thinking again.

“We can’t see the images like we saw, particularly on Saturday in Newport Beach and elsewhere,” Newsom insisted.

It seems that the local municipalities believed that they did try to respect the shelter-in-place orders and enforce social distancing. Police said that they tried to intervene but to no avail. Newport Beach’s city council is now thinking about taking more drastic measures to break up crowds. The city is considering shutting down the beaches for the next three weekends.

Los Angeles immediately dispelled the notion that their city’s residents are buck-wilding at the beach.

My compliments to our community for staying away from the beaches in LA. From Malibu, Santa Monica, Venice, to Dockweiler – All Clear!! Safer at Home will get us there sooner. pic.twitter.com/wZeJ8G8pDR

READ MORE: COVID-19 was in California much earlier than experts thought, report says

LAPD Chief Michel Moore took to Twitter to inform the governor that Hollywood might seem superficial, but they are very grounded when it comes to keeping safe: “My compliments to our community for staying away from the beaches in LA. From Malibu, Santa Monica, Venice, to Dockweiler – All Clear!! Safer at Home will get us there sooner.”

The governor reported that California has had 43,464 positive cases and 1,755 deaths. Since March 15th. the state has also issued $4.4B in unemployment insurance payments.