For Black children, youth sports activities have been a pipeline to better health in a country where Black Americans are more likely to suffer from chronic illness at younger ages.

A group of children are pictured in Harlem, New York City, at the Howard Bennett Playground with Kids. (Photo by: Jeffrey Greenberg/Universal Images Group via Getty Images)

Just as 11-year-old Qalib Martin of New York City was reaching his stride with running and a parade of benefits that came with it, the coronavirus came barreling through all our lives.

The Black youngster from Queens was blossoming as a youth ambassador with Rising New York Road Runners, a subsidiary of parent organization TCS New York City Marathon, the largest marathon in the world. Qalib was developing a love for pounding the pavement.

“Whenever I run, I feel energized, I have that spark,” Qalib told theGrio by telephone. “It’s like I really want to run and get better and better.”

Qalib not only was taking part in races and runs around New York, but also speaking to groups and, through that, growing his confidence.

“I do feel nervous whenever I talk but I only keep that inside of me,” Qalib said. “On the outside, I just smile and do my thing.”

Sadly, much of that good thing took a left turn on March 22, when New York Governor Andrew Cuomo encouraged residents to stay home and ordered all businesses and public places shut down except essential services. The mandate was an attempt to slow down the spiraling numbers of coronavirus deaths in New York City, a pandemic hot spot.

Group gatherings were forbidden too, which effectively cancelled all group runs and speaking engagements for Qalib. The trend spread nationwide. By April 15, 42 states were under lockdown orders and several cities and counties within three more states also enacted stay-at-home mandates.

Although some states are slowly reopening, youth sports nationwide remain cancelled for the foreseeable future during what would have been their peak season. The changes go beyond group sports too. For instance, New York City Mayor Bill de Blasio announced in mid-April that the city’s public pools, a source of respite for countless children seeking to escape concrete, would remain closed through the summer. Youth recreational centers in Los Angeles, off limits due to stay-at-home orders, have been converted into facilities for homeless people most at risk for coronavirus.

For Black children, youth sports activities have been a needed pipeline to better health in a country where, according to the Centers for Disease Control and Prevention, Black Americans are less likely to be able to afford healthcare and more likely to suffer from chronic illness at younger ages. Black adults are 60 times more likely to contract diabetes than non-Latino white adults, according to the U.S. Office of Minority Health. The agency also reports Black Americans have the highest death rate over any demographic group for all cancers combined. According to the CDC, almost 20 percent of Black children ages 6 to 11 are obese compared to 14 percent of non-Latino White children.

For children living in at-risk circumstances or in dense areas where there are fewer opportunities to get outside and get physical, youth fitness programs are even more critical, Bethany Rubin Henderson, youth development director of the Washington nonprofit DC Scores, said during a virtual discussion organized by the Aspen Institute.

“For so many of the kids that fall at that end of the spectrum, their sports team is their lifeline,” she added. “It’s not a nice thing to do, it’s not an extra thing that they do, it is their safe space, it is the place where they belong, and I worry a lot about the sense of belonging for those kids, which is often unseen, and what it means when they lose that during this time.”

Fortunately for Qalib, his mother, Simone Martin, has been proactive about making sure he and his two brothers get time outdoors during the crisis. She takes him to a concrete area behind their apartment building so he can run laps. Qalib also is taking advantage of a Rising New York Road Runners program called Active at Home that partners with public schools to bring fitness to children via the Internet. 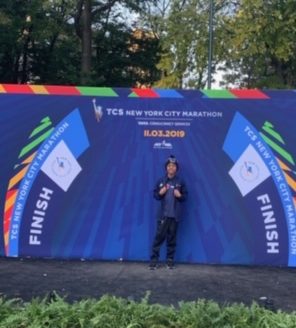 Qalib Martin is pictured during a race in an undated photo.

“His communication skills and his ability to speak eloquently are shining through,” said Simone, 40. “It’s also translating to school work.”

Qalib’s involvement began about a year ago, when a gym teacher rewarded him for his focus with a pair of New Balance running shoes. The teacher recommended him to be an ambassador with Rising New York Road Runners and he was accepted. Since then, Qalib has spoken before his school and even the New York Historical Society. After one of his talks, he received roar-like applause, Simone said.

“I’m thankful — this wasn’t something that came from me,” she continued.

Like Simone Martin, leaders of national fitness programs know first-hand the difference that fitness can make. They are adjusting to meet the increased need, and some expect more parents will be looking for free youth programs because they’ve lost their jobs.

Washington-based GirlTrek is the largest health nonprofit for Black women and girls, and promotes activities to get them outside and moving. Since the pandemic brought on social distancing and more indoor activity, organization leaders stepped up engagement on the company’s already active Facebook pages. The organization focuses on women, and operates under the expectation that women will share their love for activity with their daughters.

“Black women are already disproportionately impacted, so when something is happening, it’s happening double time in ways that impact our health,” cofounder Vanessa Garrison told theGrio. “That’s the whole mission of GirlTrek – how do we build cohesion so that women don’t feel isolated and alone? How do we change the narrative?” 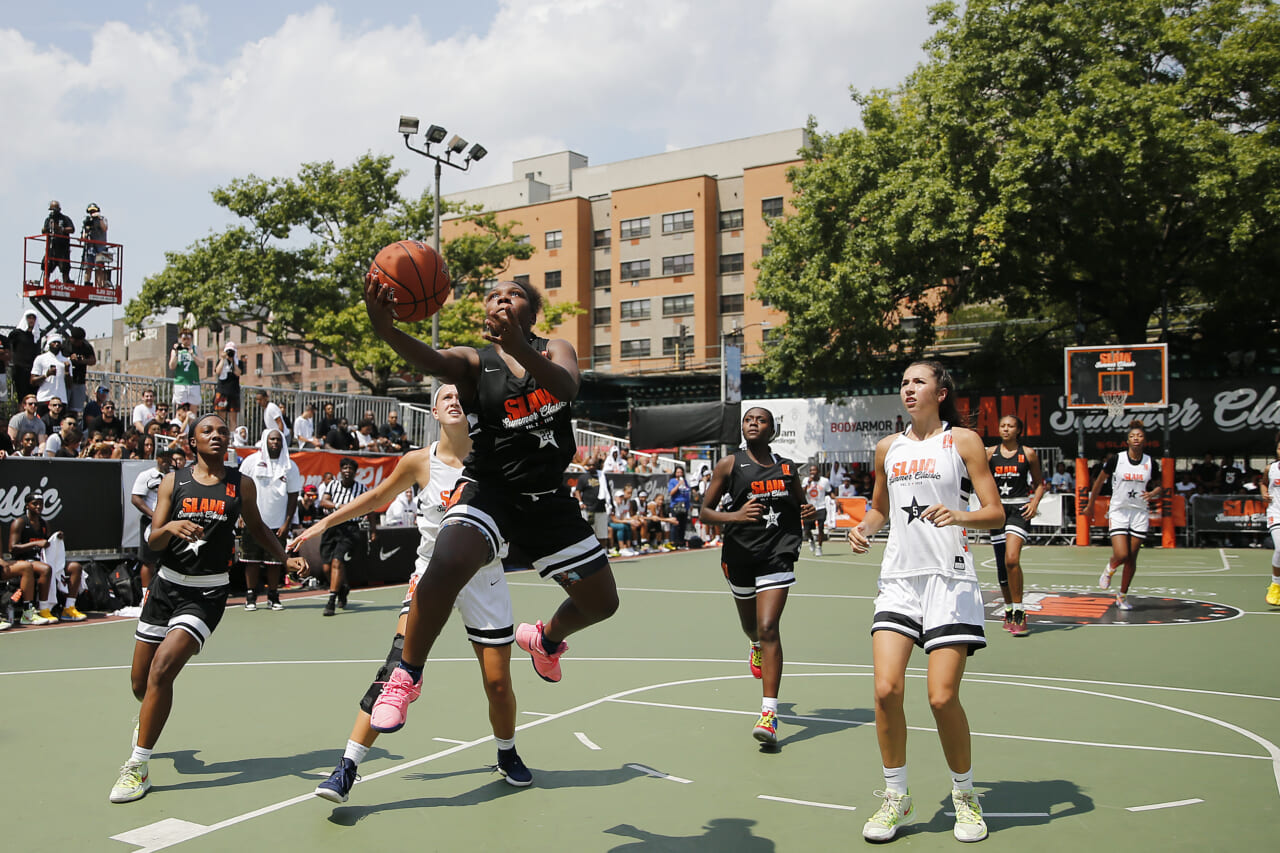 The pandemic derailed GirlTrek’s plans to take 1,000 women to the Rocky Mountains, to host organizer training in Selma, Ala., as well as hundreds of group walks that take place every week, cofounder Morgan Dixon told theGrio. The organization is filling in the gap by stepping up website content that offers support, and encouraging women and girls to engage in 30 minutes of self care daily, she said.

“We’ll find better timing,” Dixon said regarding the larger group events. “The first tenet is to get healthy first – save yourself first.”

“The activities … [include] … core runs, yoga, simple movement quite frankly and can be adapted outdoor and indoor,” Capiraso said. “So much of this program has to do with kids building confidence and interacting with other people overall.”

The purpose of Little League baseball and softball for young people is to “instill qualities that will be beneficial for the rest of their lives,” Little League President and CEO Steve Keener said in a telephone interview.

With the absence of its busiest season of the year, the Pennsylvania-based organization is encouraging coaches to stay in touch with young people virtually. “Our primary ability is to just provide resources and ideas and we’re trying to do that,” Keener said.

Statistics seem to support that black children are more dependent on youth sports for a number of reasons. A study released earlier this year by the Aspen Institute showed that black youth take part in the biggest variety of sports, 2.24 for each youngster on average.

As for Qalib, he believes this too shall pass. The young runner stresses this despite the fact that he and his family live in Flushing, Queens, six miles from a hospital that New York Gov. Cuomo once called the “epicenter of the epicenter” of the pandemic.

“It’s a letdown that this had to happen but it’s going to be OK,” Qalib said.  “Maybe next year.”

Qalib asked if he could quote his idol, late tennis star Arthur Ashe, in offering some words of encouragement.

“I would like to say his quote: ‘Start where you are, use what you have and do what you can,” Qalib said. “I think we all need to hear that to get through the coronavirus because I know we can make it.”