OPINION: Tonya Pendleton writes that the former First Lady may be accomplished but she's still trying to figure it out like the rest of us

I read Michelle Obama’s memoir Becoming at a spa in Canada, about an hour outside of Toronto. It was December of 2018 and I’d been working almost non-stop for the past decade years through the same history that she’d lived through. It was the first time in years I’d been able to take two full weeks off and Canada was my first stop before a few days in Havana, Cuba.

Reading Michelle’s book was exactly the soothing balm I needed. I’d never met Michelle but saw her at an Ebony event once where I rushed over to get her assistant’s card to possibly secure an interview. One never took place so I, too, watched from afar as she went from articulate but unpolished candidate’s wife to a poised and beloved First Lady.

Not only did Michelle redefine the role of FLOTUS by being the most educated, along with Hillary Clinton, but her fashion also outdid every FLOTUS before her except maybe Jackie Kennedy — only because both women dressed superbly for both their roles, the men they complemented and the times they lived in.

In her memoir, Michelle provided, not a blow-by-blow description of her White House years, but a nuanced version of the upbringing that helped her prepare for it. She talked about growing up on the South Side of Chicago in a modest home with blue-collar parents and the kind of familial support that allowed her family to live in a top-floor apartment in her great-aunt’s house.

Michelle’s descriptions of her childhood and her formative years matched mine in so many aspects. She had a family that supported her opinions and her mind. She was tall. She was, in the way that Black people think of it, “sassy” and opinionated. The main takeaway I had from the book was how unlikely it was that she’d made it the vast distance from the South Side to the White House. In the Becoming doc, Michelle acknowledges it as well.

The one hour and 29-minute documentary was marketed as a behind-the-scenes look at the book tour which took place in sold-out arenas around the country. Imagine, just for a second, how popular a former First Lady has to be when her book tour is sold out in places where sports teams and Beyoncé are the usual draws.

It is instead a continuation of the central question of the book itself which is that who Michelle Obama is was forged far before her life as FLOTUS and it is that foundation that grounds her, not any of the accolades she’s received since. It is also a look at a woman, now 56, trying to figure out her second act after a first act she never could have anticipated.

Knowing what I know about celebrity and fame, I realize that almost every famous person’s public image is a combination of authenticity and strategy. The question for most is just what percentage is the result of that strategy and what percentage is real.

In Michelle Obama’s case, as she recounts the shameful blowback she received for once saying during her husband’s first campaign “This is the first time in my life I’ve been proud of my country” it’s fair to say that the ratio is likely 75% to  25% authenticity vs. image.

In that moment, Michelle realizes that while she could no longer show as much of herself to the public as she wanted to, she could also find a way to be as much of herself as possible. In re-watching the clips from the documentary where a pre-FLOTUS Michelle is forced to stay on script, the sadness in her eyes is evident. 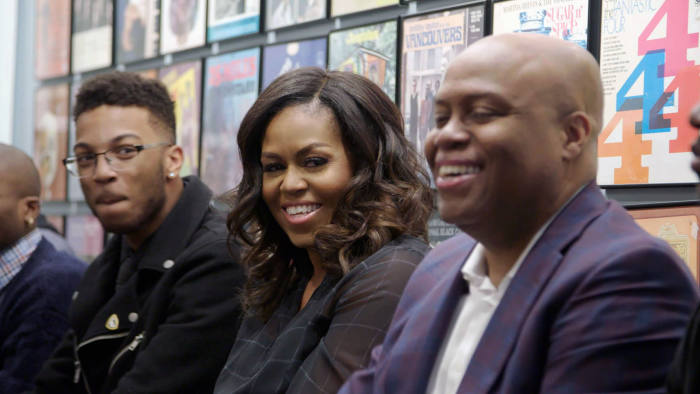 She was called everything from an angry Black woman to an anti-American to things even more insulting and profane. Yet she went on to carry out her role as First Lady, in support of her husband’s ambitions and not her own, for eight years, emerging as one of the most popular women in the world.

Becoming is not all serious. There are many funny parts moments – Barack coming out during one of the stops on the book tour with flowers and comparing himself (including rapping the relevant lines) to Jay-Z with Michelle as his Beyoncé, knowing he’s only there to provide a little sauce when she’s clearly the main event.

There is Michelle ruefully conceding that despite her accomplishments as First Lady, her mother, Marian Robinson, will always vibrate more to what her son, Craig, has going on, something familiar to any sister who acknowledges the same.

There is the moment that Michelle talks about she and Malia trying to go outside to join in the celebration of marriage equality taking place in front of the White House, only to find the front door locked.

From our family to yours, #HappyThanksgiving!

There are poignant moments – Michelle and her mother visiting their former South Side home, where Fraser Robinson‘s favorite recliner still sits in the same place in the living room.

There is the Black woman with purple hair who breaks down while meeting Michelle, even though she says she didn’t expect to and you understand exactly why – its simply that in Michelle’s unlikely journey, she’s absorbed the hopes and dreams of millions of little Black girls who’ve been told ‘No’ too many damn times.

As Michelle shares about her own life, she shines in the many sessions with high school students, mostly girls, where they ask her unfiltered questions about her life and her dreams and everything that has brought her there in front of them.

Some celebrities stand out in all the wrong ways when they have to interact with people outside of their privileged bubble. For Michelle,  its where she’s obviously most comfortable – in the same space as the young women she inspires – both questioning what to do next and where they can find purpose and happiness.

READ MORE: Don Lemon rips Trump over Obama jealousy: ‘What is it about him?’

In that, we understand what Michelle has beautifully articulated both in her book and in this brief but powerful look at her post-FLOTUS life. It is that no matter the title, accomplishment or accolade, no one ever actually ‘arrives.’  In some ways, we are all, like Michelle, still ‘becoming.’