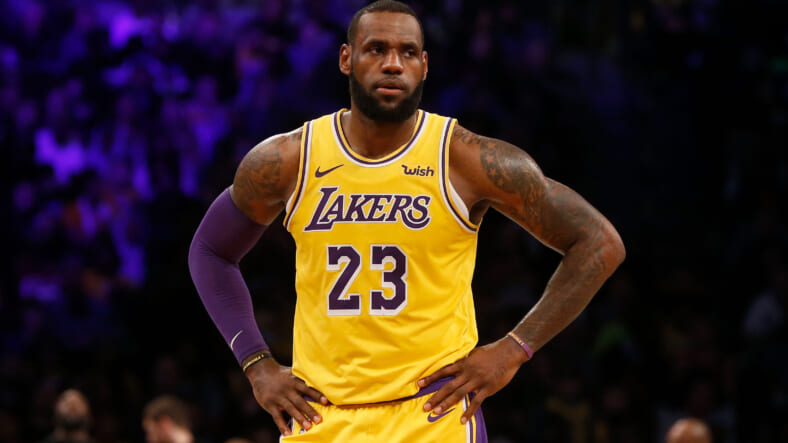 LeBron James #23 of the Los Angeles Lakers in action against the Brooklyn Nets at Barclays Center on December 18, 2018 in the Brooklyn borough of New York City. (Photo by Jim McIsaac/Getty Images)

NBA star LeBron James tweeted out his disgust at the appalling murder of 25-year-old Ahmaud Arbery. “We are literally hunted EVERYDAY/EVERYTIME we step foot outside the comfort of our homes!”

We’re literally hunted EVERYDAY/EVERYTIME we step foot outside the comfort of our homes! Can’t even go for a damn jog man! Like WTF man are you kidding me?!?!?!?!?!? No man fr ARE YOU KIDDING ME!!!!! I’m sorry Ahmaud(Rest In Paradise) and my prayers and blessings sent to the….. pic.twitter.com/r1PNxs8Vgn

James’ statement comes following the release of the graphic video of Arbery’s killing in a mostly-white neighborhood in Brunswick, GA. The NBA legend is not alone in his sentiment. Celebrities like Justin Bieber and Zoe Kravitz have all expressed their outrage over the killing.

Since the release of the video, the hashtag #IRunWithAhmaud has been trending online with social media users calling the slaying a modern-day lynching.

Politicians have also joined the call for justice for Arbery. Joe Biden releasing a statement yesterday where he said that the young man was “killed in cold blood.”

This is not the first time that LeBron James has spoken out against racial profiling and gun violence. The player famously wore an “I Can’t Breathe,” t-shirt following the choking death of Eric Garner in New York City. James also supported the family of Trayvon Martin following his death in 2014.

The killing of Ahmaud Arbery has been compared to Martin’s murder by Florida neighborhood watchman, George Zimmerman.

Arbery was jogging in Satilla Shores a neighborhood in Brunswick, GA when he was stopped by two white men, Gregory McMichael and his son Travis McMichael who were attempting a “citizen’s arrest,” due to what they allege has been a number of break-ins in the area.

In the newly-released video, Arbery attempts to run away from the men as the younger McMichael pointed a shotgun at him. After a struggle, three shots are fired and Arbery is seen falling to his death. The video was released by a Brunswick radio station who obtained it from an anonymous source. The radio station consulted with Brunswick’s Black leaders who supported the release after charges still had not been filed against the McMichael’s more than two months following the incident.