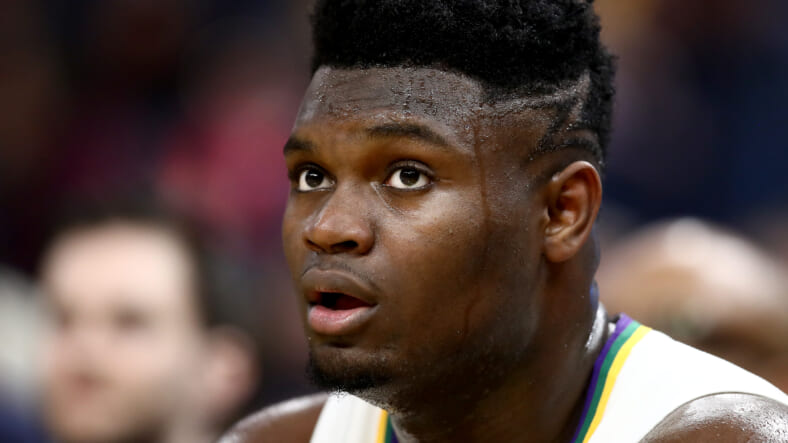 Zion Williamson #1 of the New Orleans Pelicans sits on the bench during their game against the Golden State Warriors at Chase Center on February 23, 2020 in San Francisco, California. (Photo by Ezra Shaw/Getty Images)

In an explosive report from ESPN, the marketing company suing Zion Williamson for breach of contract has asked the star to admit that his mother and stepfather demanded and received gifts, money, and other benefits from persons acting on behalf of Adidas and Nike.

It is also alleged that they received gifts from people associated with Duke to influence him to sign with the Blue Devils.

Gina Ford and Prime Sports Marketing were first sued by Williamson in an effort to terminate his agreement with her company. Ford then countersued the New Orleans Pelicans star for $100 million in punitive damages.

According to the report, Ford’s attorneys asked Williamson to admit that several statements were true in a filing with Miami-Dade County court. She alleges that Williamson’s mother, Sharonda Sampson, and his stepfather, Lee Anderson “demanded and received gifts and economic benefits,” from the university and the sneaker giants.

Zion Williamson #1 of the Duke Blue Devils dunks the ball against the Syracuse Orange during their game in the quarterfinal round of the 2019 Men’s ACC Basketball Tournament at Spectrum Center on March 14, 2019 in Charlotte, North Carolina. (Photo by Streeter Lecka/Getty Images)

The lawsuit also alleges that before becoming a student at Duke, Williamson “or person(s) acting on [his] behalf (including but not limited to Sharonda Sampson and Lee Anderson) accepted benefits from an NCAA-certified agent that are not expressly permitted by the NCAA legislation” between Jan. 1, 2014, and April 14, 2019.

A separate criminal complaint also alleges that Williamson and his family received economic benefits including money and housing that could have jeopardized his NCAA eligibility.

Duke University has previously stated that they worked closely to ensure that Williamson was eligible by conducting a thorough investigation with the NCAA Eligibility Center. In a statement, they stated “We found no evidence to support an allegation. Zion thrived as both a student and an athlete at Duke, and always conducted himself with integrity and purpose.”

Williamson is also central to another scandal involving celebrity lawyer, Michael Avenatti who was indicted for trying to bribe Nike executives alleging that the footwear company paid Williamson’s mother for consulting services while her son was a top high school recruit.

Zion Williamson played one season at Duke before becoming the No. 1 pick in the 2019 NBA draft.