Boosie Badazz otherwise known as 37-year-old Torrence Hatch Jr. is no stranger to controversy. The Baton Rouge, La. born rapper has very little filter and basically tells his 8.7M followers any thoughts that come straight out of his brain.

Therefore, its no surprise that he finds himself on the wrong side of social media when he shares his takes on hot-button subjects. That was the case when he weighed in on Dwyane Wade‘s 12-year-old transgender daughter, Zaya Wade, by saying that Dwyane  “was going too far” and not to have Zaya “cut his d**k off.” 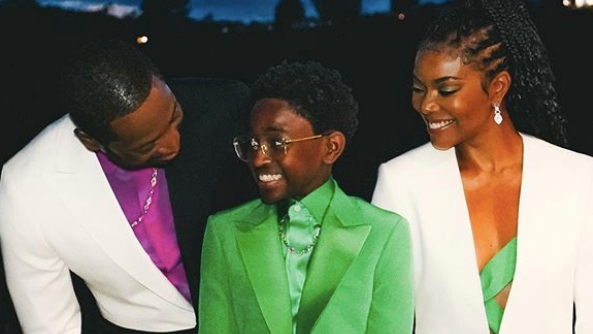 Boosie then said after the inevitable fallout from his comments that he was going to talk to Jay-Z to intervene and settle any dispute between Boosie and Dwyane. Those comments suggested that 1. Boosie could get Jay on the phone 2. That Jay-Z cared to intervene and 3. That DWade would even consider hearing him out. Boosie felt the need to clarify in an interview with VladTV that was posted this week.

“People got it wrong,” Boosie told Vlad. “The owner of my reality show, he know Jay. We started losing advertising, he like, ‘Imma call Jay. Jay can put you on the line with Dwyane Wade and y’all do some shit. We clear this shit up and go get the bag. We need to clear this shit up. Whoopty woo. Jay can make it happen.’ He the one who can make it happen. He from New York, my boy from New York. I was just like, no, bruh. No, I ain’t…I stand what I stand on. I don’t feel I said nothing wrong to apologize for.”

At the time, Boosie said his mother got on his case about it with the phrase ‘Who am I to judge?’ It resonated somewhat as Boosie then made a song with that title. Here are just some of the lyrics:

I don’t care who I offend with these tears

I know when I said it that that shit was real

To his credit, if any credit can be given, Boosie, the father of eight, says that those are his beliefs and that he feels he has nothing to apologize for.

“I just feel like children are too young to make those decisions like that and I believe in traditional values that’s all. And people took it the wrong way. I wasn’t trying to harm nobody, I don’t have nothing against nobody or nothing like that.”

(Note: Gender reassignment surgery is not permitted in the U.S. until the age of 18).

Boosie trended on Twitter today as old comments about his sons and their virginity trended. Boosie says that he had, ahem, a woman provide oral sex to his 14-year-old son for his birthday.

In shades of T.I., when the story of him monitoring his daughter’s virginity broke, Boosie later told TMZ he was just kidding. However, this is what he actually said at the time:

“I’m training them boys right,” Boosie said. “A grown, super grown woman checked his ass out, checked all my nephews out.”

READ MORE: Boosie and the double standard of sexual assault in the Black community

Social media obviously found these comments reprehensible, to say the least, and many couldn’t understand why he felt the need to comment on Zaya when he himself was promoting child molestation.

People can’t handle Dwayne and Gabrielle allowing their child to live out loud but are completley fine with Boosie’s stupid ass getting grown women to molest his underaged kids?

Boosie: Kids are too young to know if they’re LGBTQ!

Also Boosie: I pay older women to molest my sons & nephews to train them to be “real men” & prevent them from being gay.

Y’all can’t tell me this homophobic ass man is not sick. Talking about training his sons to be sexually abused. This is rape culture.

“Hell yeah I got my son dick sucked”pic.twitter.com/jMGiSpeODK

So much can be unpacked here but the main issue is that Boosie has a platform to the tune of 8 plus million followers. So someone is interested in his thoughts.

During the coronavirus epidemic, he’s used that platform to encourage women to pose topless for money, promoted several products, lined up women for a post-corona pool party, and offered discounts on ghostwriting rap lyrics among other things.

For a man who’s served time in a murder case, has diabetes (but still smokes cigarettes) and beat kidney cancer, you’d think Boosie might find some more positive ways to use his enormous reach. But you’d also wonder why, despite his problematic thought process and his lack of a mainstream hit, we’re still giving him this much attention.