Wilson Goode, the city's first Black mayor, gave a personal apology; believes this is a small step towards healing 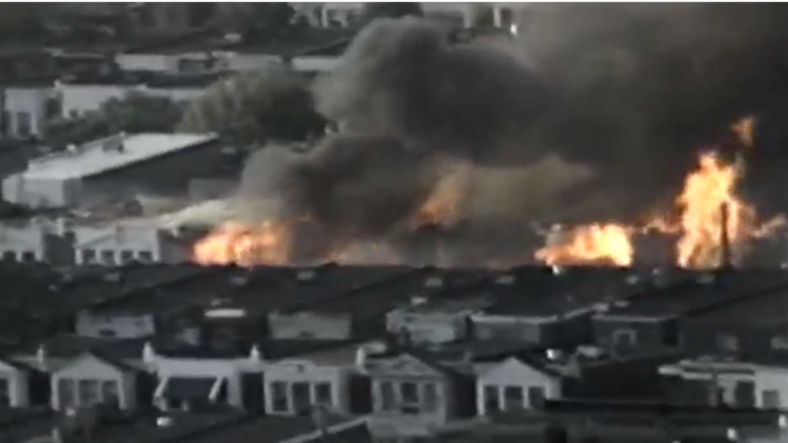 MOVE Bombing (screenshot from archived footage of the bombing)

35 years after a bombing that killed 11 people, including five children, the city council of Philadelphia has apologized for dropping a bomb on a house occupied by members of a radical group called MOVE.

Two city blocks were burned and 61 homes were destroyed.

In a statement, reprinted by 6abc.com, the city council called for May 13 to become a city-wide day of reflection.

“We call upon the City of Philadelphia to declare May 13th an annual day of reflection, observation, and recommitment to the principle that all people are created equal and endowed with inalienable rights to life, liberty, and the pursuit of happiness. Additionally, we call on all people of the City of Philadelphia to work toward eliminating racial prejudices, injustices, and discrimination from our society.”

Rev. Wilson Goode, Sr., who was mayor at the time, told The Guardian that he has “deep and sincere” regrets about the bombing. “Many in the city still feel the pain of that day – I know I will always feel the pain.”

MOVE Bombing (screenshot from archived footage of the bombing)

Goode was the first Black mayor of the city and has apologized several times in the past. He was one of the voices calling for a public and an official apology from the city. He said, “I know I can’t change the past by apologizing … I believe this action can be a small step to healing. I apologize and encourage others to do the same thing. We will be a better city for it.”

The MOVE bombing on May 13, 1985, followed a number of complaints about the group who lived in a largely African American neighborhood. Trash and loud noise were part of the complaints about the group, and the city moved to evict them. On the day of the bombing, Philadelphia police planned to clear the building and execute several arrest warrants. More than 500 officers showed up at the house.

There was an armed standoff and the event escalated.

Police then dropped two explosives on the house. The blaze quickly got out of control. 11 people were killed and the bombing left some 200 people homeless, according to a 1985 article in Time Magazine.

It all was played out on television in real-time for the citizens of Philadelphia to see.

In the statement, the Philadelphia City Council called the bombing, “reckless, ill-conceived and hastily approved.”

The current mayor, Jim Kenney said, “I think the most important thing about this issue is our administration’s response to rebuilding that neighborhood. From 1986 on, there was a series of debacles when it came to redoing those houses and we are almost done now.”

In response to the apology, MOVE member Janine Africa, who lost a son in the fire said, “Show us. What good is an apology without the action behind it? Show us that you are sorry and that you never want something like this to happen again.”