Amid the coronavirus pandemic, HBCUs have the added challenge of educating a large population of low-income and first-generation students who now need more help than ever. 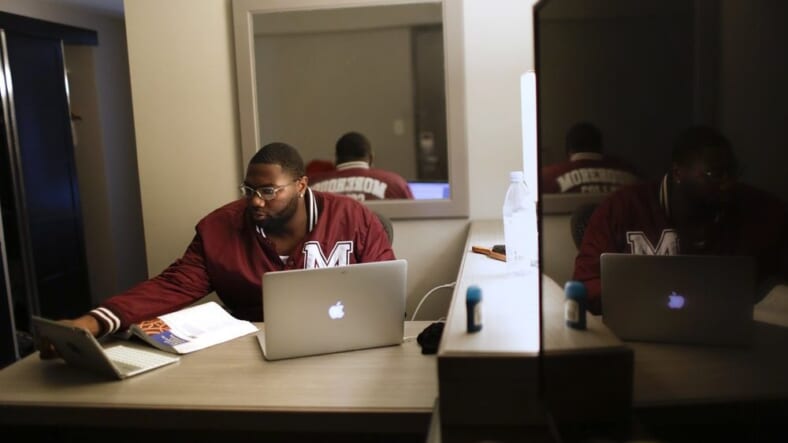 In this Tuesday, May 5, 2020, photo, Morehouse College senior Lanarion "LTL" Norwood Jr., of Atlanta, works on his computer in a hotel room in Atlanta. (AP Photo/Brynn Anderson)

NASHVILLE, Tenn. (AP) — Ja’nayla Johnson worked hard in high school with the dream of being the first in her family to graduate from college, but she started to doubt herself as several colleges rejected her. Then Bennett, a small historically Black women’s college in North Carolina, saw Johnson’s potential and offered her a full scholarship.

“Bennett means everything to me,” Johnson said. When the campus announced it was shutting down because of the coronavirus, “I was scared out of my mind.”

The sophomore said she has suffered from depression that forced her to withdraw for a semester last year and didn’t think returning home to California would be good for her mental health. She also didn’t think she would be able to continue her studies back home, where she would feel obligated to care for younger siblings.

Bennett staff provided a house for Johnson and another student along with money for necessities. The school of 268 students helped Johnson, and others like her, despite its somewhat shaky financial condition and concerns that COVID-19 could make things worse.

It is a perilous time for the nation’s historically Black colleges and universities, which have long struggled with less funding and smaller endowments than their predominantly white peers and are now dealing with the financial challenges of the coronavirus. HBCUs have the added challenge of educating a large population of low-income and first-generation students who now need more help than ever. Those students will get a morale boost on Saturday as President Barack Obama delivers a commencement speech for HBCU graduates amid an uncertain future for their schools. 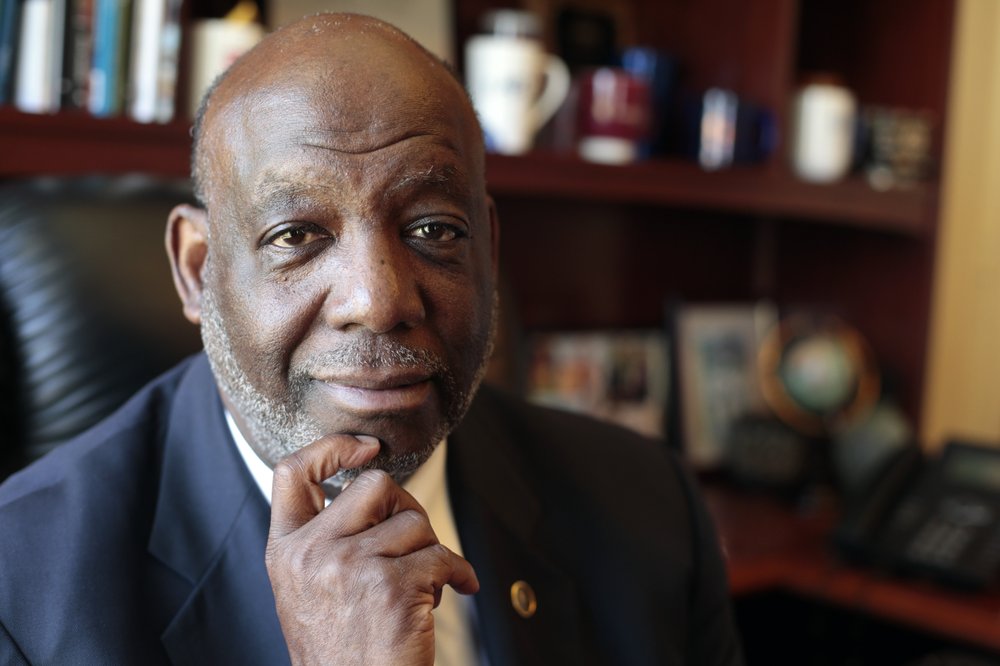 Bennett is on probation from its accrediting agency for financial instability. Because of that, the school was already making plans for a possible decrease in enrollment. President Suzanne Walsh said the coronavirus is just another challenge the school will overcome.

Brian Bridges, with the United Negro College Fund, said that even HBCUs facing serious financial trouble can survive the coronavirus. “They’ve persisted for 150-plus years of underfunding and Jim Crow segregation,” he said. “They know how to make a way out of no way.”

Forrest Harris, president of American Baptist College, a small liberal arts school in Nashville best known for educating U.S. Congressman John Lewis when he was helping plan the city’s lunch counter sit-ins. With a tiny endowment, the school relies heavily on tuition from its 100 students and is facing a “significant revenue loss” from COVID-19. Harris is confident the school will continue educating social justice leaders.

Harris is a graduate of Knoxville College, an HBCU that lost its accreditation and closed down for several years but is now accepting students through an online program and working toward the goal of restoring the campus.

“HBCUs are hard to die,” Harris said. “They have a resilient spirit and a tradition of educating African Americans in communities that are going to fight hard for them.”

That doesn’t mean the schools never die. St. Paul’s College, in Lawrenceville, Virginia, was 125 years old when it closed in 2013 after struggling financially and accreditation woes. Morris Brown College in Atlanta has been trying to reearn accreditation after a financial scandal over a decade ago forced bankruptcy and near closure. It currently enrolls 35 students.

Even at the better-endowed HBCUs, officials are bracing for a tough few years. Morehouse College President David Thomas said after the last recession enrollment at the all-men’s school in Atlanta dropped from about 2,800 to 2,100. 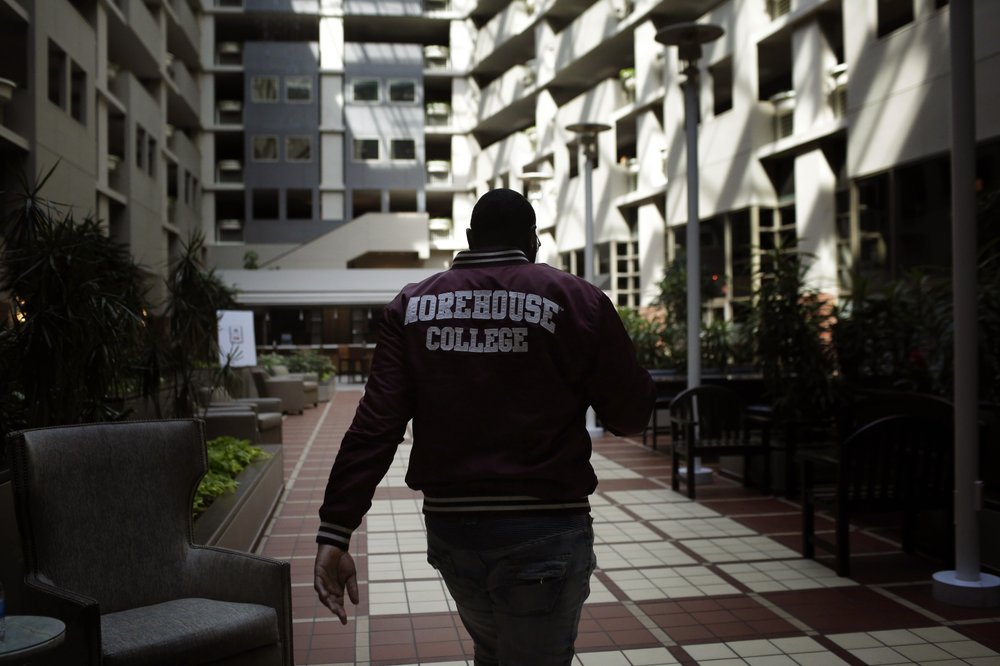 “It will always be the case that black families are disproportionately affected by recessions and economic downturns,” Thomas said. “We’re already preparing ourselves for the idea that students who didn’t need aid before will need it now because someone has lost a job. Already parents are sending emails.”

HBCUs were founded at a time when African Americans were barred from many white-serving institutions. Harry Williams, president of the Thurgood Marshall College Fund, said they are the “backbone of the African American middle class.”

While colleges today are integrated, HBCUs still play an important role in educating black Americans. A 2019 study found that two-thirds of low-income students at HBCUs end up in at least the middle class, and the schools do a better job of lifting up those students than primarily white institutions despite fewer resources.

A Government Accounting Office report found HBCUs educated more than 226,000 African American students pursuing college degrees in 2017. Meanwhile, their median endowments are only about half of those at similar non-HBCUs.

Congress has approved over $1 billion in emergency relief to minority-serving institutions, and a portion of that is earmarked specifically for needy students. Administrators say the aid will help but won’t make them whole.

Delaware State University launched an emergency fund for students and quickly raised $250,000 but received applications with needs totaling $750,000 for things like transportation, housing, food and technology, President Tony Allen said. The emergency fund has continued growing, but so has the need.

Like many other schools, Delaware sent laptops to students who lacked them and worked with telecommunications companies to provide Internet service. But Alabama State University President Quinton Ross said he has students who live in rural areas where broadband Internet just isn’t available. Students had to “complete their coursework using the old correspondence course,” he said.

Ross, who is an Alabama State alumnus, said HBCUs have traditionally been “a shelter in a time of storm” and sending students home was “one of the most difficult decisions our team has ever had to make.”

At Morehouse, the school is housing around 20 students who could not return home in an Atlanta hotel. They include graduating senior Lanarion Norwood, who grew up just a few minutes away from the campus in a neighborhood he was desperate to leave.

Norwood was rejected three times by Morehouse, but convinced the school to place him on a probational summer program and then enroll as a student. He has spent every summer on campus, working for the same program he attended after high school.

“It was kind of magical when I first stepped onto the Morehouse campus,” Norwood said. “Since then, there’s never been any other place for me.”