Ashanti was a fixture on Billboard charts in the early 2000s 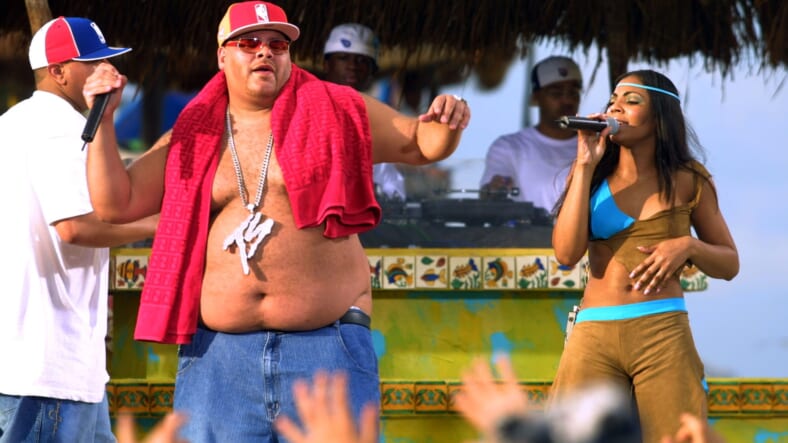 Fat Joe and Ashanti perform during MTV Spring Break 2002 on the beach in front of the Grand Oasis Hotel in Cancun, Mexico. 3/14/02 Photo by Scott Gries/ImageDirect

Ashanti was a fixture on Billboard charts in the early 2000s.

At one point during the decade, four of the top 10 songs on the Billboard 100 were either sang by or included Ashanti as a writer. Now in 2020, Fat Joe revealed to Ashanti and the public a never-before-heard story about one of those titles and its origin.

During an Instagram Live conversation with the Long Island singer/songwriter, Joe told her that the 2001 hit single “What’s Luv?” — which featured Ashanti — almost did not come to fruition in its current form. Irv Gotti, the song’s producer, and rapper Ja Rule initially wanted Jennifer Lopez to sing the hook instead of Ashanti.

As the story goes, Gotti and Ja Rule had called Joe to the studio to present the track they made for him to rhyme on. While Ashanti sang the hook on the demo, the songwriters wanted it to feature a “Latino” connection with Joe and Lopez, who are both Puerto Rican.

However, Joe told Ashanti he was so impressed with the demo that he wanted her to remain on the track.

“‘Naw, we leaving her on there,’ and that’s how it went down,” he explained to a stunned Ashanti.

“Yo! Did you know I never knew that?” she responded with laughter. “[Irv] stay trying to pull records from me!”

They went on to discuss her Billboard success that year.

Ashanti’s most notable collaboration with Ja Rule, “Always on Time,” topped the Hot 100 in February 2002. Within two months, “What’s Luv?” peaked at No. 2 and “Foolish,” her debut single, occupied the No. 1 slot soon.

In that same month of April, Lopez’s “Ain’t it Funny,” which featured Ja Rule, also reached No. 1. Ashanti reminded the audience that she penned the hit, which placed four songs that she had a role in at the top of the list.

“All of them was in the top five,” Ashanti said. “So that’s why that whole thing with ‘Ashanti ties The Beatles‘ came into play because I wrote the ‘Ain’t It Funny’ record.”