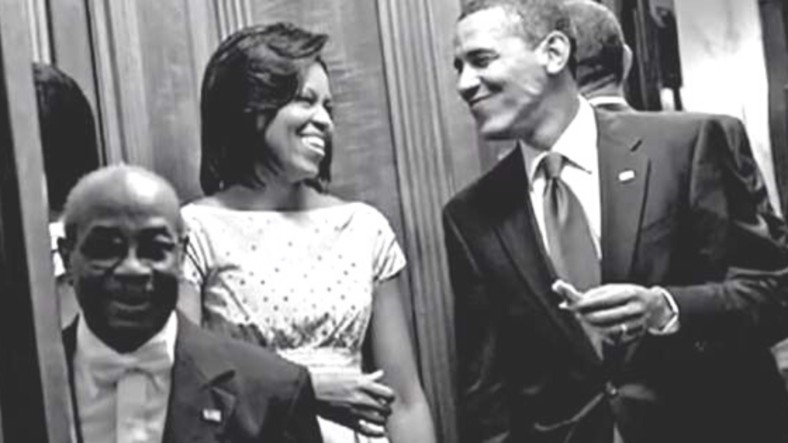 Butler Wilson Roosevelt Jerman with The Obamas (Image from the book, "Becoming")

Wilson Roosevelt Jerman was a beloved employee at the White House from 1957 to 2012. After 55 years of serving at the pleasure of 11 different presidents, Jerman died last weekend from complications of COVID-19 at the age of 91.

According to a report from DC’s Fox5, Jerman began his career as a cleaner under the Eisenhower administration. He later became a doorman and developed a friendship with former first lady Jackie Kennedy. Because of their bond, Kennedy made a move that ultimately changed his life.

“Jackie O actually promoted him to a butler because of the relationship,” Jerman’s granddaughter, Jamila Garrett said in a video interview with Fox5. “She was instrumental in ensuring that that happened.”

In a statement to NBC News, former president George W. Bush and his wife, former first lady, Laura Bush remembered the man fondly. “He was a lovely man,” the Bushes said. “He was the first person we saw in the morning when we left the Residence and the last person we saw each night when we returned.”

Jerman left the White House at the end of Barack Obama‘s first term. A photo of him and the Obama’s is featured in Michelle Obama‘s book, Becoming.

Wilson Roosevelt Jerman was one of the White House’s longest-serving employees.

READ MORE: ‘The Butler’ shut out of Golden Globe nominations

His granddaughter said that Jerman was dedicated to service, “It didn’t matter who you were, or what you needed, he would try to help,” she said, “I want the world to remember my grandfather as someone who is always authentic. That is what his legacy is and that is what our family will always remember.”

The role of a White House butler is to prepare state dinner banquet rooms, feed the first family, and be available for any request that may arise. According to the Clinton archives, there are usually about six full-time butlers on staff.