In an exclusive interview with theGrio, the singer and TV star also opens up about struggling with her confidence and coping through the pandemic

This has been a monumental week for Kandi Burruss, singer/songwriter of the 90s R&B girl group Xscape and a member of the hit reality TV series The Real Housewives of Atlanta.

From a surprise 44th birthday party to an explosive RHOA virtual reunion show, to releasing brand new music for the first time in years, to being crowned The Masked Singer’s first female winner in three seasons.

Burruss has a singing career that spans almost 30 years, but her confidence level hasn’t always reflected that.

In an exclusive with theGrio, Burruss expressed that much of her early confidence came from the support of her older brother, Patrick Riley, who sadly passed away in a car accident when Burruss was only 15.

“When I was 14-years-old, me and my girls — our group Xscape — we were kids, but we were practicing around the house. And Patrick said to me one day ‘you know what? You got what it takes to make the pros.’ He always used to make me feel good. My brother was the best,” she said.

Since her brother’s passing, Xscape went on to become one of the top R&B groups of all time, churning out multiple platinum-selling albums, and solidifying their place in Black music history.

However, since the group’s split, Burruss has been having a hard time finding her own voice as a solo artist. 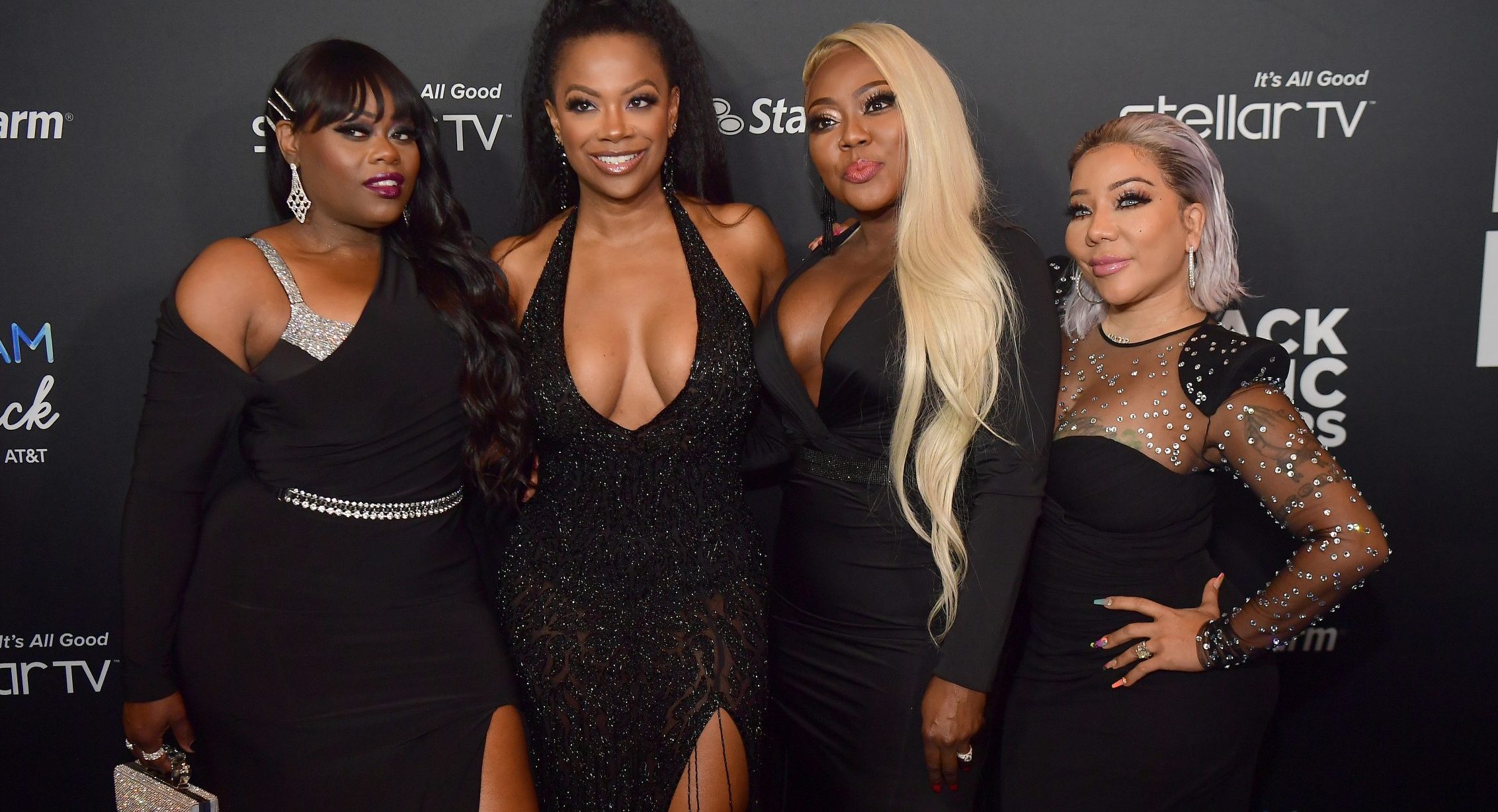 “I kind of lost confidence in my voice because I’d be seeing people posting and tweeting ‘Oh, she can’t sing. I hate her voice’ and, you know, making jokes about me as far as like my vocals or whatever. And so that stuff kind of plays into my head,” Burruss shared.

“It was to the point where I’d feel like ‘damn, maybe I don’t sound that good.’ Or ‘maybe I can’t really sing.’ Which is weird for some people to hear me say because they’re like ‘but you sung on hit songs before.’ And I’m like ‘Yeah, I have, but you know, if you hear people say that it makes you feel like, well, maybe it was a fluke or something.’”

Burruss was first presented with the opportunity to be a part of The Masked Singer back in Season 1, but it coincided with Xscape’s 2017 reunion tour. When the opportunity presented itself again this season, she was hesitant to take it.

“My initial thought was ‘Okay, so people are just going to be dancing around in costumes?’ Would people say I’m corny for this? And then the other thought was that I hadn’t really been singing by myself in a long time, and there’s a lot of great competition on this show,” she said.

“I mean, Gladys Knight was on Season 1. And Patti LaBelle was on Season 2. So I was just like, ‘I don’t know what I’m walking into.’”

However, a major motivating factor for Burruss was witnessing rapper/singer T-Pain claim the top prize in Season 1. “I love the fact that he had been off the scene for a minute. But then, he came back and he was victorious,” she said.

Despite her initial apprehensions, Burress said she gained an immediate confidence boost by being on the show.

“The great thing about The Masked Singer is if you go into it with a lack of confidence or not being sure if your voice sounds good or if people like you, you get to perform in front of all these people with this mask on. You’re not being judged on you, you’re being judged just by your voice, just by your performance,” Burruss said.

People weren’t judging Kandi. They were judging the Night Angel. There are a lot of people who hate and just be like ‘oh, she get on my nerves on Housewives. I don’t want to hear her sing.’ Or there may be people who are like, ‘I don’t want to see her if she ain’t with the group.’

She added, “But you don’t even have to think about any of those things. You just get up there and do your thing. And it was so cool to be able to look at the comments — even though I couldn’t reply or like any of them because I had to keep it a secret. But seeing comments from people on social media who were saying, ‘oh, my God, I love Night Angel! Oh, she killed it!’ felt really good.”

Burruss also learned a lot about how to best showcase her voice throughout the course of the show.

“I have a unique voice. My voice is really, really deep or I can sing super, super high. But that mid-range? Sometimes that’s not my comfortable space. And that’s where a lot of songs for women are,” said Burruss. “But the one thing that I learned from the vocal coaches on the show, was to drop the key and change up the arrangements to fit my voice.”

Those risks and adjustments paid off as Burruss remained a crowd favorite throughout the entire season, ultimately claiming the top prize. But not all the attention she’s been receiving this week has been praise.

Prior to her taking her mask off on the show, many folks raised an eyebrow at her “Mask On” themed birthday party this past Sunday. In response to the criticisms about her having a large party in the midst of a pandemic, Burruss had this to say:

“Well here’s the thing … I didn’t even plan the party. It was a surprise party. And I know that my husband’s intentions were good. That’s why it was called ‘Mask On.’ Everyone was supposed to keep their masks on.

#PressPlay—#TSRBirfdayz: #KandiBurruss straight kickin’ it for her 44th cakeday celebration! Get it, girl!? (SWIPE) #KandisMaskOnBDay

“Some of us just got excited to see each other. Most of the people that were there had been in the house for the last couple of months and had not even been out.”

Burruss added, “I know everybody has their opinions, and don’t get me wrong, I went and got myself tested. I did the COVID test Monday, after my birthday. And I also did the antibodies test the week before. So I already knew I’d never had it. Now can I say that about everybody there? I don’t know. I pray that they did.”

And that wasn’t the only drama surrounding that day. Many people noticed that Burruss and other party guests were fitted with customized masks that seemed to take a shot at her RHOA co-star, Nene Leakes, with the quote “I’m embedded in your m***** f***** brain” – a line Burruss used to taunt Leakes during RHOA’s reunion episode.

It turns out Burruss wasn’t the only one throwing subtle shade that day, as Leakes posted an unflattering picture of the two of them on Instagram along with the caption, “I will NOT let fake beef YOU made up to stop me from wishing you a Happy Birthday & posting my favorite pic of us Kandi.”

I will NOT let the fake beef YOU made up to stop me from wishing you a Happy Birthday & posting my favorite pic of us Kandi. Everybody go wish @kandi a Happy Birthday! Then tune into #RHOA to watch Kandi have the fakest, want some smoke, beef wit Nene segment at 8pm TONIGHT on @bravotv #happybirthdaynumber2 #forgetable #kandiman #funshaderight #mrsatlantaonly ??

“She’s comedy. I was at my birthday celebration when somebody told me that she had posted. And I was just like, I don’t know how to take this. I don’t know if I’m supposed to go in on her or am I just supposed to laugh?” Burruss said.

“At first I didn’t even want to respond, but after the episode aired and you know, I was saying how ‘I’m embedded in your brain,’ I was like ‘I’m gonna play along with her’ and that’s why I decided to post that video of us all in Japan singing ‘Understanding’ with the caption ‘I love how you were singing my song, and thank you for the birthday wishes” she laughed.

“Understanding” was one of Xscape’s biggest hits on their first album in 1993, which featured Burruss’s impressive whistle tones. Burruss pursued a solo career in the early 2000s, and after taping for The Masked Singer this past year, she decided to once again bless us with some new music, the first of which she released the day of the show’s finale.

“There may be some people who will probably have things to say about the lyrics, who are probably more conservative. But I don’t really care about those people’s opinions to be honest with you. I just feel like they need to get with it and let people love who they love and have fun, you know?” she said.

With the planned launch of her new music, and as the owner of multiple businesses, Burruss is definitely feeling the effects of the COVID-19 shutdown, but she hasn’t let it slow her down.

“I’ve still been working even though we’ve been in quarantine. I think it’s just a natural thing for me to always be trying to put something together. My husband and I were about to open a couple more restaurants before this happened, and he’s working on finishing one so that when things do open up, I pray to God we will eventually figure out this new normal,” Burruss said.

“What I do enjoy is that even though I am working, technically, I’m able to work from home. So after I’m finished with a long day of interviews, I get to go and sit down and eat dinner with my family. I get to play with my son and give him a bath at night, which is important. This has made me revamp a lot of things and rethink what’s really important.”

As a mother, an entrepreneur, an award-winning songwriter and singer, a musical icon, a TV star, and now the first female winner of The Masked Singer, Burruss has a lot to be proud of, and she knows her big brother would be proud of her too.

“I know in my heart of hearts, whether it’s true or not, he’s my guardian angel. I have accomplished so much and so many great things have happened to me after his passing,” she said.

“I’m not saying that had to happen for it to happen, but I just feel like he’s the one that’s kind of guiding me along the way and pushing me forward. If he were here, I know he would say ‘I told you you had what it takes to make the pros.’

“Used to Love Me” by Kandi Burruss ft. Todrick Hall and Precious is now available for download on all streaming platforms.