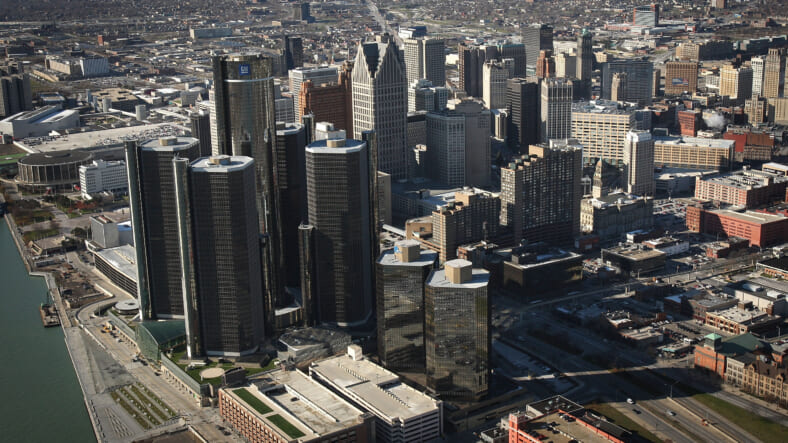 The skyline of Detroit's downtown as seen on November 21, 2008. (Photo by Spencer Platt/Getty Images)

While Black American voters largely remain unimpressed and oftentimes bewildered by the Trump administration, the president isn’t giving up on wooing them.

From the Super Bowl ad highlighting his work on criminal justice reform to the “Black Voices for Trump” centers pushing “Woke” merchandise, President Donald Trump appears to have a never-ending trick bag of stunts to entice Black voters.

Now comes word that during a meeting with Black Michigan leaders on Thursday, Trump is mulling bringing a new historically Black college to Detroit after prompting from a state elected official.

Meanwhile, Black Twitter is wondering how a college can be “new” and “historic.”

To make it make sense, one must turn to the mastermind behind the idea, Michigan Rep. Karen Whitsett, D-Detroit, who is looking to boost value to her city via a new higher learning that aims to educate Black students, Atlanta Journal-Constitution reports.

Detroit is the Blackest city in America by percentage.

Video footage captured from the meeting shows Whitsett touting her idea to President Trump. The two appeared at a meeting at a Ford Motor Company plant, where ventilators and personal protective equipment are being built, near Ypsilanti, Mich.

“I would love to see a historically black college in the city of Detroit, and I think you’re just the president to do it,” she said during a roundtable discussion.

Trump immediately appears to be intrigued by the plan.

“It’s an interesting idea,” he said. “They’ve got a lot of money now. They’re all set. Maybe we can work something out. We’ll talk about that.”

The president then suggests John James, a Black Republican from Michigan and candidate for a Senate seat, “start working on” what he calls a “great” idea.

News of the meeting was quickly met with backlash on social media, namely due to the lack of historical context around a “new” Black college.

This is laughable. First, @realDonaldTrump says HBCU are financially “set.” Really? HBCU Presidents, has Liar-In-Chief given y’all all of the money to solve your financial woes? Hell no https://t.co/NOomIuNKLn

Another Twitter user noted a “contradiction” in the idea of creating something that is both new and historic.

The concept of a *new* historically black college is a contradiction in terms https://t.co/ywhIftlDak

Even Trump’s motives were questioned by Xanté Wallace, a city councilman for Prairie View, Texas, and himself a graduate of Prairie View A&M University, an HBCU in the same city.

Out of pure curiosity, did she propose “founding” an HBCU in Detroit because Detroit has a lot of black people?

Because Universities are deemed with the title “HBCU”, not by % of black but by historical relevance.

Bluefield State, an HBCU, is 85% white so there goes that logic. https://t.co/ZMLxTqgFDR

Even by federal definition, Rep. Whitsett’s plan cannot be introduced, as historically Black colleges and universities (HBCU’s) are those established before the Civil Rights Act of 1964, according to the U.S. Department of Education, and the Higher Education Act of 1965.

Of the 107 HBCUs in existence, few are in the North as most are concentrated in the South. Detroit was the site of Lewis Business College, an HBCU also known as Lewis College of Business.