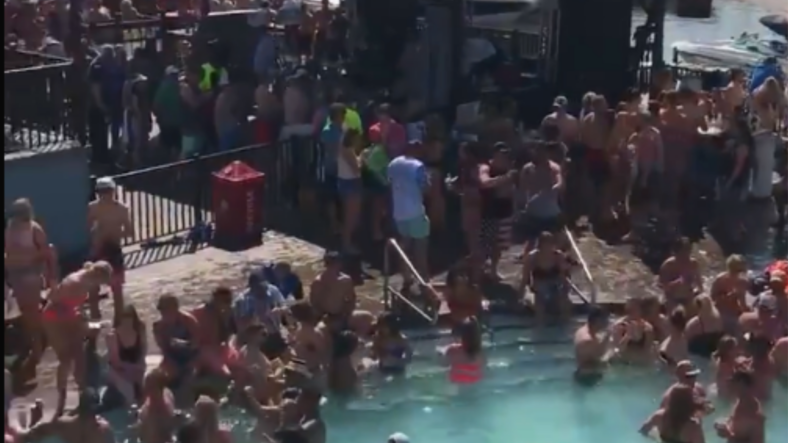 Scott Pasmore, a reporter for Missouri’s KTVK, shot video footage of a Memorial Day weekend party at the Lake of the Ozarks that has gone viral.

Backwater Jack’s Bar and Grill was the site of a pool party called, “Zero Ducks Given.”

No covid concerns at the lake of the ozarks? #loto pic.twitter.com/Yrb4UNM64u

According to CNN, the party was advertised on Facebook in a post that has now been deleted. The venue worked with government officials and management teams in efforts to follow social distancing guidelines.

“Extra precautions and safety measures will be taken to provide a safe environment for you to enjoy the event,” the bar said before the gathering, according to the report.

The bar had a paramedic on-site, and according to one person who attended, they took patron’s temperatures and provided bottles of hand sanitizer.

Jodi Akins, from Blue Springs, told CNN in a message that she visited the bar with four friends for a pool party on Saturday.

“When we walked up my first words were ‘oh my gosh’ it was intense for sure!! Social distancing was nonexistent. However, everyone was enjoying themselves. It was a very carefree environment but security was heavy!!” she wrote to CNN.

Pasmore’s Twitter post of the event has been viewed more than 16 million times with more than 20,000 comments.

No covid concerns at the lake of the ozarks? #loto pic.twitter.com/Yrb4UNM64u

Some commenters are supportive of the revelers, saying that COVID-19 is suppressed in humidity and not transmittable in water, while others say that the party is negligent behavior that will affect others.

Sunlight kills #COVID19. Humidity likely suppresses it. Outdoors spread is very rare. How are these 3 facts still unknown to many in the media, like you?

Lake of the Ozarks is a destination area for the St. Louis area. The area features resorts and restaurants, which are most profitable from May to October. According to the FOX affiliate in the area, many resorts are all booked up.

About 11,800 people in Missouri have tested positive for coronavirus and about 680 have died from COVID-19 infection, according to state data.