The hashtag has sparked criticism for its passive call-to-action and promotion of silence. 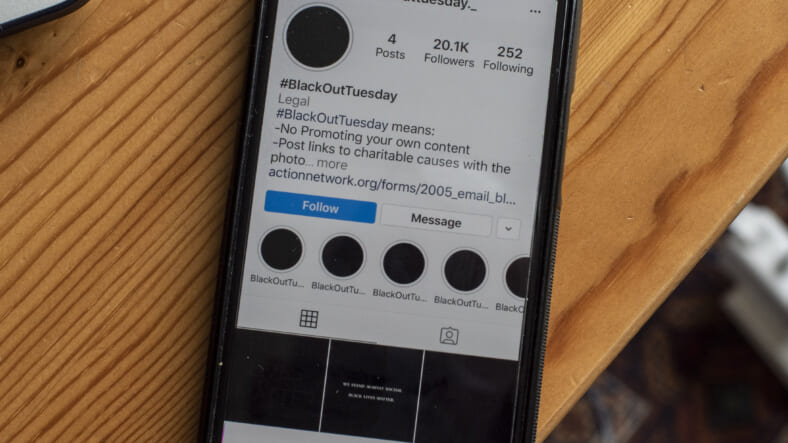 A smartphone displaying the Instagram #blackouttuesday account is seen in Washington on June 2, 2020. (Photo by ERIC BARADAT/AFP via Getty Images)

The Black community is in the midst of fighting for our right to live peacefully, but some of us are torn on the correct way to enact change.

This week, the music industry declared that they were going to “turn off the music” on Tuesday in an effort to reflect and inspire change amid nationwide protesting over the deaths of George Floyd, Breonna Taylor, Ahmaud Arbery and other Black people who have been killed or terrorized.

“On Tuesday June 2nd, Columbia Records will observe ‘Black Out Tuesday,’” the Sony label, home to Beyoncé, Adele and John Legend, said in a statement. “This is not a day off. Instead, this is a day to reflect and figure out ways to move forward in solidarity.”

“We continue to stand with the Black community, our staff, artists, and peers in the music industry,” the company continued. “Perhaps with the music off, we can truly listen.”

The initiative soon transformed into #BlackOutTuesday, with thousands of people, from celebrities and activists to brands and companies, sharing a blacked out image on their social media channels in a show of solidarity.

However, some activists and community organizers argued that not only was the campaign ineffective, but it was actually harming the Black Lives Matter movement by flooding the hashtag #BlackLivesMatter with black squares, instead of resources, useful information or videos and photos of protesting.

From the looks of it, a good move intended for the music industry got co-opted to suppress protest, Black voices, AND Black voters on Election Day! Thank you to @enylduj for finding these images!!! ⠀⠀⠀⠀⠀⠀⠀⠀⠀ Black folks, post as you wish. Our voices matter so much right now. ⠀⠀⠀⠀⠀⠀⠀⠀⠀ Others, amplify Black folks, learn, and move urgently toward anti-racism. Follow @blackandembodied and @jessicawilson.msrd’s #AmplifyMelinatedVoices to learn how. ⠀⠀⠀⠀⠀⠀⠀⠀⠀ Shout out to the Black women in the music industry who started the REAL #TheShowMustBePaused for your industry to learn, plan, and act! ⠀⠀⠀⠀⠀⠀⠀⠀⠀ ⠀⠀⠀⠀⠀⠀⠀⠀⠀ And ALL of us must continue to watch out for this as the election comes. Click the #LinkInBio to learn more about what digital suppression has looked like and how it has been weaponized against Black people. ⠀⠀⠀⠀⠀⠀⠀⠀⠀ ⠀⠀⠀⠀⠀⠀⠀⠀⠀ ????MOST importantly: One day of some confusion don’t stop no show. We WILL win. ⠀⠀⠀⠀⠀⠀⠀⠀⠀ ⠀⠀⠀⠀⠀⠀⠀⠀⠀ ⠀⠀⠀⠀⠀⠀⠀⠀⠀ I LOVE YOU ❤️✊? #BlackOutTuesday

On this day of pointlessly blacking out social media with empty black squares how about we NOT FORGET WHY WE’RE SO ANGRY IN THE FIRST PLACE AND START POSTING WAYS TO HELP – YA KNOW, ONE OF THE *ACTUAL* REASONS FOR BLACK OUT TUESDAY?????? WHY IS IT SO QUIET TODAY?! https://t.co/XOBOBQrMt5

Some public figures have found a happy medium, sharing the blacked out image alongside a call-to-action or resources that can tangibly help the movement. In the midst of the campaign, hundreds of people have continued to protest against police brutality through the streets of America’s major cities.

Instagram released a statement on Tuesday afternoon encouraging its users to continue to share, but with the correct hashtag. “We’re hearing asks from the community that posts related to Blackout Tuesday use the hashtag #blackouttuesday, and not #blacklivesmatter,” the company said. “The #blacklivesmatter hashtag aggregates important information and resources for the community.”

#BlackOutTuesday DOES NOT MEAN LEAVE SOCIAL MEDIA FOR THE DAY IT MEANS THIS ?? RT this NOW to inform our kinfolk! pic.twitter.com/h33vqdPEdP